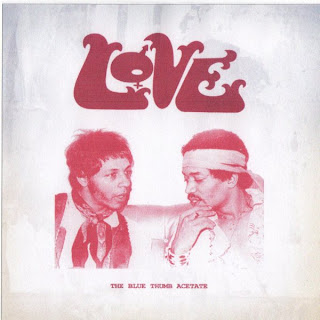 An acetate of Jimi at a 1970 session with Love, surfaced recently on Ebay (July 2009. Ending price: US $2,025) and is now in circulation among collectors.
The session took place at Olympic Studios in London (March 17th, 1970). The first track is an early mix of the track that opened the Love album "False Start". Jimi puts in some vocals on the two brief and raggedy takes of "Ezy Ryder". Finally there is a nice ten minute jam with all concerned where Jimi exchanges solos and riffs with Gary Rowles.
Invited by Love's Arthur Lee to contribute to his band's album, Hendrix returned to Olympic Studios, the recording facility where he had recorded Are You Experienced and Axis: Bold As Love. Hendrix and percussionist Remi Kabaka joined Love in recording "The Everlasting First", which came out in December of 1970 as part of Love's False Start. The three musicians recorded sixteen takes of before a basic track met Lee's approval. Two clean, complete takes of Hendrix's own "Ezy Rider" followed next. Hendrix then took part in an extended instrumental jam session before departing.
Engineers: Keith Harwood, Jeremy Gee
.
Love is: 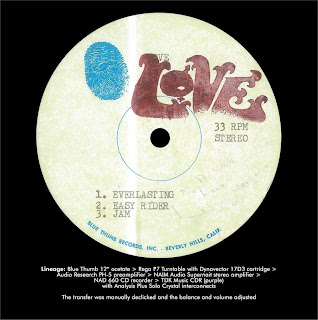 4 Loon
.
The Everlasting First written by Arthur LeeThe Everlasting First arranged by Jimi Hendrix and Arthur LeeEasy Rider written by Jimi Hendrix.
.
For more details about these recordings, visit love.torbenskott.dk
.
Also included on this Bootleg are recordings that Jimi Hendrix made with Stephen Stills.
When Hendrix was forming his trio The Jimi Hendrix Experience in 1966, his manager Chas Chandler reputedly contacted Stills’ manager to invite Stills to become the group’s bass player. But Stills’ manager was concerned that Stills’ friendship with Hendrix, and his admiration for Hendrix’s genius, might prompt him to take the job rather than continue with Buffalo Springfield. So he didn’t pass the message on. Within a year, though, both Stills and Hendrix were superstars in their own right. They continued to socialise and jam together informally until Hendrix’s untimely death in 1970.
. 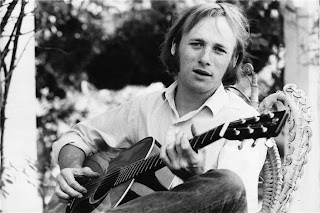 A truly historic recording, "Old Times, Good Times" brought together the talents of both Stephen Stills and Jimi Hendrix, both at the height of their careers. Loosely based on the Spencer Davis Group's "I'm a Man," the modified, minor-ninth chord melody works well in contrast to the spiraling chorus turnaround, which allows Hendrix and Stills to trade leads on guitar and organ, respectively. The lyrics are a pure and effective autobiographical statement, where Stills traces his musical progression from his childhood in the South to New York and finally California.
John McDermott, one of the archivists and overseers of Jimi Hendrix's recordings, has confirmed that an album of tracks featuring Stephen Stills and Hendrix is being readied for release.
McDermott confirmed to MusicRadar: "Stephen has been working with Experience Hendrix to compile an album's worth of sessions recorded with Jimi Hendrix during 1969 and 1970." McDermott says he is acting as a co-producer on the collection, but no further details are being released yet.
. 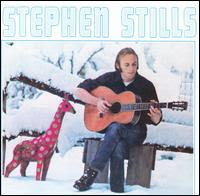 Previous sessions involving the two guitarists have emerged before – notably the Stills' Basement bootlegs - but the authenticity of some of those tracks has been questioned. One track featuring Hendrix on guitar, from 1970 - Old Times, Good Times – appeared on Stills' self-titled debut album of the same year, but it seems there is much more.
The most controversial track the two recorded together is called White Nigger (included here as a Bonus Track) – many versions of this song (originally recorded with Stills singing and Hendrix on guitar) have surfaced before, but there is dispute as to whether these existing bootlegs actually feature Hendrix or are later versions recorded by Stills in 1973 with a different guitarist.
A source close to the project told MusicRadar: "We have tapes in our archive - Jimi on guitar and bass - plus Stephen had some from his 1970 solo album that he wanted to finish, fix and mix. From a musical point of view, it's definitely Stephen with Jimi helping - as opposed to a joint collaboration. But it is still a very nice project."
.
Jimi jams on bass on the 18 minute "Live And Let Live" (in fact a jam around Joni Mitchell's "Woodstock", with Steve Stills and John Sebastien on guitar and Buddy Miles on drums)
This jam session was organised and produced by Alan Douglas.
.
"Live And Let Live" Sessions, Record Plant, New York City, NY 30.09.69:
"Jam 1"; 4:37
"Jam 2"; 5:32 "
"Jam 3"; 8:04
"Woodstock" (1) [Instrumental rehearsal]; 3:42
"Woodstock" (2) [vocal rehearsal]; 2:53
"Woodstock" (3) [Take 1]; 5:26
- "Live And Let Live" Sessions; Tracks 7-9: Buddy Miles: drums / Duane
Hitchings: organ (mixed out) / John B.Sebastian?: guitar / Jimi Hendrix?:
bass (track 9) / Stephen Stills: guitar
- "Live And Let Live" Sessions; Tracks 10-12: Buddy Miles: drums / Jimi
Hendrix: bass / Stephen Stills: vocals & organ
.
I particular like this Bootleg as it contains some of the best Jam sessions that Hendrix put together with other artists and the sound quality is excellent. The rip provided here was taken from Vinyl at 160kps but don't be put off - the quality is still excellent. Full album artwork is provide - for both the original Blue Thumb Release with Love and a the later release with additional tracks featuring Stephen Stills included.
.
Track Listing
01 The Everlasting First
02 Ezy Ryder - take 1
03 Ezy Ryder - take 2
04 Loon
05 The Everlasting First (final version)
06 Old Times Good Times
07 Jam 1
08 Jam 2
09 Jam 3
10 Woodstock 1
11 Woodstock 2
12 Woodstock 3
13 White Nigger (Bonus track)