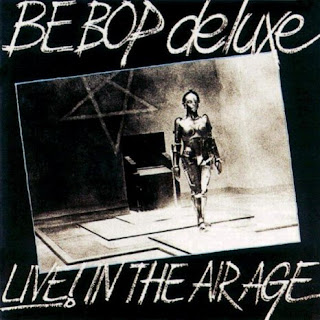 Be Bop Deluxe were sequined glam rock heroes, led by Bill Nelson’s blistering virtuoso guitar work, seemingly beamed down from an impossibly glamorous forgotten future-world. Equal parts Roxy Music, Bowie, and Queen, Be Bop Deluxe were an intoxicating ‘70s phenomena filled with lipstick posturing, surrealistic lyrics and searing, melodic guitar solos that sounded exorcised from Bill Nelson’s semi-acoustic, cherry sunburst Gibson 345.
In Be Bop Deluxe, Nelson proved himself one of the most technically accomplished British guitarists of the 70s. Bill Nelson’s started out playing what he calls “psychedelic blues music” in various ad hoc bands during the 60s. But it wasn’t until the ‘70s that his career began in earnest with the solo LP Northern Dream. Financed by the owner of a Wakefield record shop, it was originally limited to 250 copies. One of them found its way to John Peel who began playing it regularly on Radio One, prompting executives from Harvest to seek Bill out. Their intention was for him to revisit Northern Dream with better recording equipment but, having just formed the first line-up of Be Bop Deluxe, Bill had other ideas. A single, “Teenage Archangel” b/w “Jets at Dawn” was recorded before the Harvest deal was signed and sold at concerts (both tracks are included on Postcards From The Future).
. 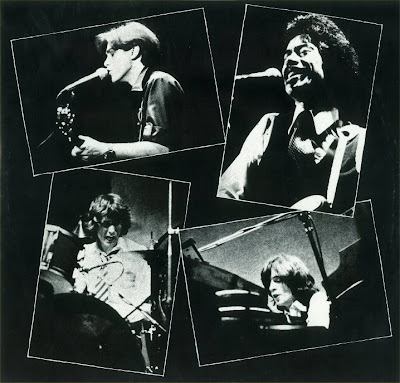 Bebop Deluxe’s debut album, 'Axe Victim', appeared in summer 1974, showcasing Bill’s fluid style, jazz-tinged chops and thin but confident tenor vocals. There was a change of line-up for Futurama, on which Bill’s vision was given full rein by the kitchen sink approach of Queen producer Roy Thomas Baker. Heavy with layered guitars and melodic ideas pursued on a whim and quickly abandoned, it featured two of the best singles never to hit the charts: “Maid In Heaven” and “Sister Seagull.” Be Bop toured with Cockney Rebel and as headliners, finally notching a hit single with the ambitious “Ships In The Night” from the Sunburst Finish LP, which led to their only appearance on Top Of The Pops and a US record deal.
The next long player, Modern Music, dealt with Bill’s disillusionment with that experience while reflecting on his science fiction fixation. The title track, a dreamy pop concoction that takes in every established guitar style and a few new ones besides, is particularly impressive. A break from their punishing schedule was plugged by the concert album 'Live! In the Air Age' before Drastic Plastic completed the band’s natural life span. Recorded in the south of France in the Rolling Stone’s mobile studio, Bill’s guitar plays second fiddle, as it were, to synthesizers as he tried to assimilate electronics into his work. Be Bop Deluxe’s live album showcased the band running through stunning versions of their hits and became a UK Top Ten hit.Throughout Be Bop Deluxe’s short lifespan the band has been a keen influence, inspiring many a New Romantic band in the ‘80s including Duran Duran and Gary Numan. In fact, the story goes that upon seeing Be Bop Deluxe in concert, David Sylvian and friends decided to form the group Japan. Having far too long being name-checked yet seldom heard, Be Bop Deluxe are now ripe for rediscovery.
.

'Live in the Air Age' (not "Life") is the finest live album produced by this amazing group. Although ignored by the press and most music fans, Be Bop is an outstanding example of progressive rock in the late 70's. If you have any appreciation of Mick Ronson, Phil Manzanera, Jeff Beck, Bill Spooner and Roger Stein, or Frank Zappa, you owe it to yourself to become one with Be Bop's Bill Nelson. Sadly, the 70's was a period of transition for music listeners..
As a side note: the White Vinyl edition of 'Live in the Air Age' is much softer than the black vinyl edition, and as a result is subject to more damage from normal use than the black vinyl. SO STOP PLAYING THE WHITE VINYL VERSION, if you have it! When there are no more vinyl pressings (within the next ten years or so), this album will be as sought-after as the Dead Sea Scrolls!
'Live in the Air Age' is one of the best Be Bop Deluxe albums ever (oh by the way, it’s a two-record set).. Bill is in terrific form, on the guitar, and the rest of the band is as tight as The Tubes. If you are looking for a Bill Nelson spectacular, this is his best live recording with Be Bop. Also check out his solo work ('On a Blue Wing', et al).
The rip was taken from CD at 320kps and includes full album artwork for both CD and LP.
.
Track Listing
01. Life In The Air Age
02. Ships In The Night
03. Piece Of Mine
04. Fair Exchange
05. Mill Street Junction
06. Adventures In A Yorkshire Landscape
07. Blazing Apostles
08. Shine
09. Sister Seagull
10. Maid In Heaven
.
Band Members
Bill Nelson (vocals, electric guitar)
Andrew Clark (vocals, keyboards)
Charles Tumahai (vocals, bass guitar, percussion)
Simon Fox (drums)
.
Be Bop Deluxe Link (130Mb) REPOST
.
Posted by AussieRock at 8:27 PM