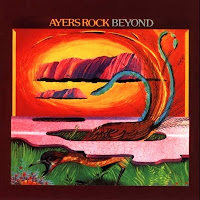 Ayers Rock was a jazz-rock group formed in Melbourne, Australia, in 1973. Members included drummer Mark Kennedy, Ray Burton, Russell Dunlop, Chris Brown, James Doyle, Doug Gallacher, Col Loughman, and Duncan McGuire and the band toured the U.S. in 1975-1976. During '75-76, Kennedy began working with Marcia Hines and they later became engaged, which led to him leaving Ayers Rock in 1976. He was replaced for a time by Russell Dunlop, who, like Kennedy, was a seasoned veteran, and a respected session player and producer, but his permanent replacement was hotshot young drummer Hamish Stuart, who has since become a mainstay of the Sydney music scene and one of the most respected drummers in the country. At this point the group also added a permanent keyboard player, Andy Cowan (ex Madder Lake).

Ayers Rock's second LP Beyond was not quite as successful sales-wise, but no less impressive musically. By this time the emphasis had shifted to longer works that allowed the band to showcase its considerable improvisational skills, and the LP consists of just six tracks, three each by Col Loughnan and Chris Brown. One of Brown's songs, "Little Kings", was lifted to become their third single.

Recorded in Los Angeles, the album was vastly more expensive to record than its predecessor, reportedly costing Mushroom a whacking $60,000, but by this time Mushroom's coffers had been swelled by the massive success of Skyhooks. The LP was also released in the USA, with different cover art. Their fourth and final single for Mushroom, "Song For Darwin" (May 1976) was inspired by the Cyclone Tracy disaster that had devastated the city on Christmas Day 1975. 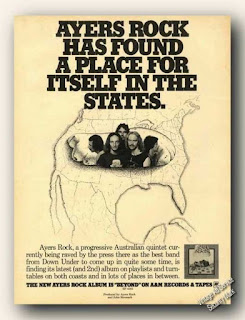 After parting with Mushroom, the band broke up for about three years, but it was reformed by Brown, Doyle, Stuart and Cowan in 1979 and they established their own label, Red Rock. A new single, "On The Avenue" was released at the end of 1979, followed by "Lies" in early 1980, both issued through Polydor. The singles were both included on their third and final LP Hotspell, distributed by RCA. Unfortunately, the album was not successful and the band broke up in 1981. .Founding members James Doyle and Duncan McGuire have, sadly, both since passed away; Duncan died in 1986 from a brain tumour and Jimmy died in May 2006 from liver cancer.

However, it is great to see that Mark Kennedy, Col Loughnan and Ray Burton are all still going strong. Ray has his own website, featuring great information and images of his career, past and present. Col has recently released a new CD, Ellen St, and his earlier collaboration with guitarist Steve Murphy, entitled Feel The Breeze, is also highly recommended. Both are available from Col's website
.

The rip of Beyond was taken from CD at 320kps and includes full album artwork along with select photos of the band. I have also included the A & B sides of their first single "Rock 'N' Roll Fight" (1973) as bonus tracks (thanks to RobyB at Midoztouch for the Single rips)
.
Track Listing
01. - Moondah (Beyond)
02. - A Place To Go
03. - Catchanemu
04. - Song for Darwin
05. - Angel in Disguise 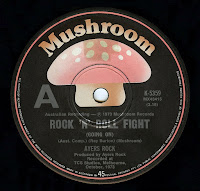