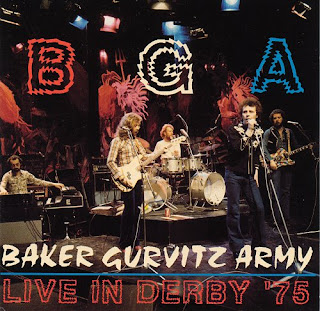 Baker Gurvitz Army (BGA) was a short-lived English rock group. Former The Gun and Three Man Army members, Paul Gurvitz and Adrian Gurvitz joined forces with ex-Cream drummer Ginger Baker in 1974. Things had not been going too well for Ginger Baker since the demise of his own band Ginger Baker's Air Force. The Gurvitz Brothers, too, were looking for a new way ahead after the early success of their band The Gun. In 1974, though, it seemed all three could use their greatest talents in the Baker Gurvitz Army.
Their self-titled debut album was released the same year and featured a dynamic mixture of heavy rock, guitar themes propelled by Baker's irrepressible drumming. He also contributed a lengthy dramatic opus called 'Mad Jack' which told the story of a motor race in Africa partly sung by Paul with a spoken narration by Ginger, sounding as if he had a bit of trouble with his teeth! He added some tyre squealing sound effects, presumably from his beloved high speed Jensen sports car - fortunately recorded before the fan blade disintegrated and destroyed the engine.
The Baker Gurvitz Army would later take on extra musicians, including vocalist Snips from the band Sharks and keyboard player and arranger Peter Lemer from Seventh Wave. At its best the band was very tight and powerful and the music still stands up today, at a time when many Seventies albums sound weak and poorly produced. Certainly Adrian was a much underrated guitarist, who had a tremendous turn of speed and passionate feeling for the blues. It was perhaps not surprising he sometimes seemed pissed-off at the world. He was a much better guitarist than many of his more publicised contemporaries. 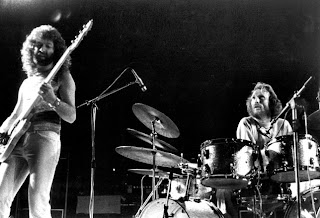 The band recorded two more albums, 'Elysian Encounter' (1975) and 'Hearts Of Fire' first released in 1976. Maybe it should have been called 'Tempers Of Fire' because personality clashes eventually led to the band breaking up the same year! In the aftermath Ginger briefly led a band called Energy, and was associated with Vincent Crane's Atomic Rooster and Hawkwind. Baker the master drummer would spend the next few years dividing his time between playing polo and olive farming in Italy, until he returned to play with such bands as Masters Of Reality and a Cream style trio with Jack Bruce and Gary Moore in 1994 (BBM). Adrian Gurvitz embarked on a solo career and became a successful writer and producer based in Los Angeles, writing for such artists as Whitney Houston. Most of the 'Hearts On Fire' material was written by Adrian, although Snips contributed a couple of songs, 'Neon Lights,' and 'Mystery.'
Paul Gurvitz wrote 'Smiling', something he did rather more than Adrian. Ginger Baker devised the opening title track, but it wasn't long before the fires went out, at least until the next gig and the next band. [Taken from the liner notes of the Hearts On Fire and Wikipedia]

Adrian Gurvitz went on to record several solo albums and released the hit single 'Classic' in 1982. He also joined up with Graeme Edge (Moody Blues) and his brother Paul to form the Graeme Edge Band in the late 70's - releasing 2 successful albums 'Kick Off Your Muddy Boots' and 'Paradise Ballroom'. 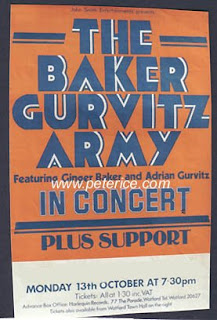 During the short 3 year period that the Baker Gurvitz Army were together, they were captured live on a number of bootleg recordings, and I am including the best one of these here for your enjoyment. Recorded live in Derby (1975), this recording captures the band at the height of their career and the sound qualty of this boot is excellent. Playing a selection of tracks from all three of their albums along with a number of covers ('Freedom' by Hendrix, and 'White Room', 'Sunshine Of Your Love' by the Cream), each band member gets an opportunity to strut their stuff. In particular, Baker produces a dynamic (but not too lengthy) drum solo at the end of Memory Lane which leads straight into the nostalgic 'Sunshine of Your Love'.
Their Cream renditions are fresh and tight and fit nicely in amongst their own BGA classics. My favourite BGA tracks are 'Remember' and 'Inside Me', mainly due to the awesome guitar work from Gurvitz along with the interplay of vocals and drums from Mr. Snips and Baker respectively. However, it would have been nice to see the inclusion of 'Mad Dog' in this set, as it was their first big hit and has been an all time personnel favourite.
The rip included here was taken from CD at 192kps and includes full album artwork along with selective pictures of the band.
.