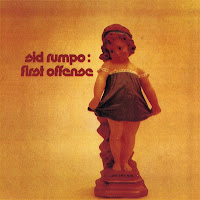 Sid Rumpo was a fairly polished pub-rock band which formed in Perth in 1971 and unfortunately disappeared into the mists of time in 1974. They are probably best remembered as one of a long line of Mick Elliot's bands. Mick is an accomplished blues-rock guitarist that has been around the Aussie blues & rock scene forever (in bands like Levi Smiths Clefs, Jim Keays' Southern Cross, They Accidentally Sued Themselves and Western Flyer), but rarely seemed to stay in a band long enough to record more than one album. 'First Offence' - Sid Rumpo's one and only offence as it turned out - features the twin guitar riffing of Elliot and Rob Searls on some very catchy boogie and blues-rock songs.
While there aren't any jaw-dropping "guitar hero" solos, all the songs pump along with the assistance of some tasty electric piano chops from Ken Wallace over the tight grooves laid down by Noel Herridge on drums and Owen Hughes on bass.
But for me, it's Rob Searls' bluesy vocals that stamp First Offence with it's appealing, distinctive 70's, Aussie Rock sound. I think though, that it's the songs themselves that are the real strength of this album. It is a cohesive album where nothing sounds out of place, and yet might be unpredictable enough in places to interest fans of progressive blues and rock (review courtesy of Midoztouch).

.
( 'Spider Curry' with Sid Rumpo Photo Gallery)
.
Sadly, Sid Rumpo didn't make another record. Why, is anybody's guess but after this First Offence - maybe Mick Elliot got time off for "good behaviour". He must have done something right, because mint vinyl copies of the album are fetching almost $200 at some online auctions. All the more reason to treasure my own mint copy - Ok, so I've played it a few hundred times but there's not a scratch on it and it still sounds as good as the day I bought it in the mid seventies. My favourite track would have to be 'Sailing' with its up tempo boogie beat, brilliant dueling guitar riffs, and memorizing piano licks by the talented Ken Wallace. This is truly a classic Aussie album which belongs in every rock collection.
This rip was taken from a CD pressing at a 320kps and includes Album Artwork. I have also included some live recordings from Sunbury 73 & 74 and The Garrison 73 plus the B-side single to The Riddle which was not included on the album. Thanks to George (Perth Bands 1960's-70's) for the photo of Sid Rumpo shown below. The CD release was reissued in 2013, however it is no longer available and currently out of print.
. 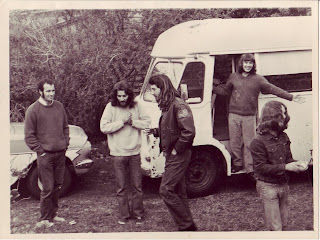 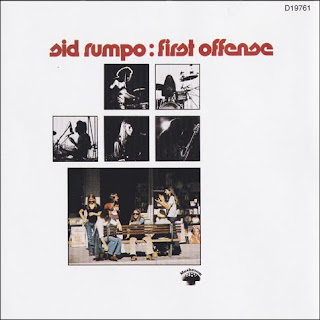