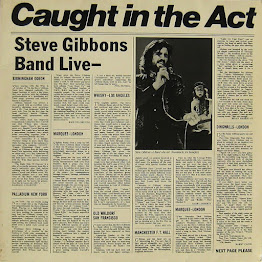 Steve Gibbons is a British rocker who put out a number of albums during the 70's & 80's. I have several, of which I think this is the best one, but there's several others out there I don't have. The Steve Gibbons Band was a basic Rock & Roll band, nothing too flashy. One reviewer somewhere down the line called him the British Bob Seger. A handle which may have hurt his chances in the states to be acknowledged.

This album contains some popular covers (Dylan, Beatles, Berry) as well as some great original efforts all played with originality and enthusiasm. If you're a fan of British R&R then I'd recommend this one. He's still out there performing today!

Because of the live qualities of the Steve Gibbons Band (SGB) it was logical that the third LP was not a studio album but a live recording. Recorded in the same line-up as the two albums before (bass, vocals – Trevor Burton, drums – Bob Lamb, lead guitar, keyboards, vocals – Bob Wilson, lead guitar, vocals – Dave Carroll, lead vocals – Steve Gibbons) and again supervised by Kenny Laguna as producer, it was released in 1977 under the title "Caught in the Act“. (So the title alludes to the gangster and half-world image the band gave themselves). 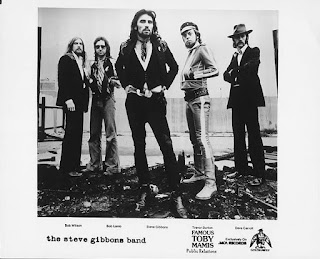 Among twelve songs there are no less than five cover versions, whereby only "Day Tripper“ is a widely known mega-hit by the original artists.
To promote sales, the front cover features reviews of concerts the band has given at such illustrious venues as the Whiskey in Los Angeles, the Palladium in New York or the Marquee in London. For those the review that a fan gave on the internet more than 30 years after the release of the LP would fit as headline : 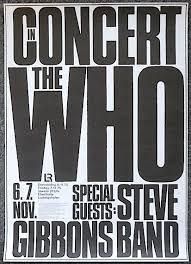 I saw these guys live in 1975 supporting "The Who“ on their US tour, and they tore the place up. It’s a good thing the "Who“ were headlining because a lot of bands wouldn’t have been able to top their live show !
If you summarise the concert reviews on the LP cover, you'll get the following picture: -
The SGB had developed drastically through the American tours with The Who and was now able to play in large auditoriums without any need, and had thus attained the "licence“ for stadium concerts.
In doing so, it combined the "rawness of the young Who“ with instrumental skill.
With regard to the two guitarists Dave Carroll and Bob Wilson (different species of prairie runners in appearance – Cody and his chief scout) it was pointed out that they played "“two utterly different stylist that meshed neatly". Elsewhere there is even talk of "lethal double leads“. Together with Trevor Burton on bass and Bob Lamb on drums the band is said to have been "a squad of unusual power“. 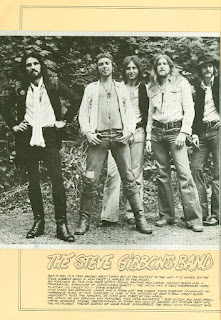 And the singer is characterised as "powerhouse of a vocalist in the Daltrey, J. Geils vein, possessing a natural rock`n`roll acting ability and surprisingly personable stage presence despite a macho image“.
All in all, Steve Gibbons is attested that his voice is "the group`s chief asset". This voice could "strip the wallpaper“ and Gibbons‘ appearance would make even a tough guy like Johnny Cash appear to be a ninny.
Twice it is pointed out that the band could easily be mistaken for a "Southern boogie band“ coming "from somewhere north of Georgia". Lynyrd Skynyrd is mentioned in this context.
And also other critics praise the album. American Robert Christgau, who did not like the two studio LPs too much. In his own snotty style, he points out:
"Neither of Gibbons’s first two albums convinced me that the world needed a young Bob Seger–which meant among other things a craftsman who hadn’t yet mastered his craft."
To then praise the selection of Gibbons‘ covered songs on "Caught in the Act“ and his own work "Gave His Life to Rock`n`Roll“
But this time he’s writing them and picking them with a sharp nose for the cliche. Assholes the world over cover Berry and Dylan on the live album, but they won’t risk unrecognised classics like "Tulane“ and "Watching the River Flow,“ which is why they’re assholes. And how many other craftsmen could imagine a mock myth called "Gave His Life to Rock ’n‘ Roll“? 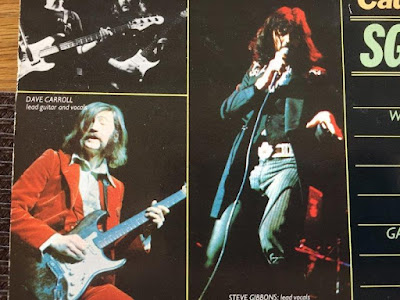 So the focus of the record and the reviews on it was on the "hard stuff“. Interestingly enough, the concert reviews printed on the record cover also positively emphasise songs (like "Spark of Love“, "Please Don’t Go“, "All Right Now“ and "Strange World“) that are not found on the album.
These are all songs in a more moderate pace. Therefore this circumstance is a clear indication that the album was not meant to show the whole musical range of the band and their concert appearances, but to emphasise the rocking side above all. 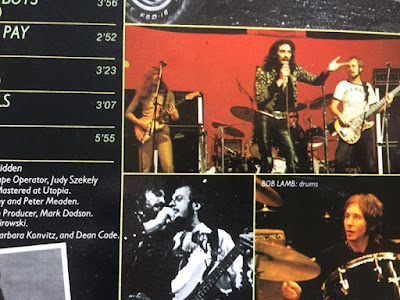 Which is absolutely successful on this record. You can hear exclusively "a band who eat thumbtacks for breakfast“.
This image is supported by the cover design. It still uses pictures from the time when the songs were recorded. Therefore, unlike the TV appearances from the time the record was edited, below you can still see a long-haired, casually dressed band of sinister-looking characters, who also posed with a pistol in front of a gold Royce Rolls. 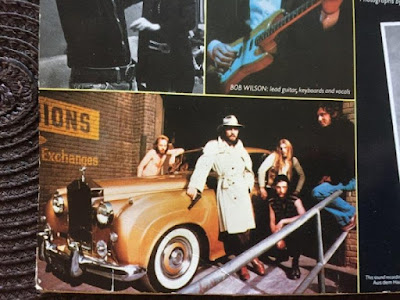 But this also addresses one of the main problems in marketing the versatile SGB: Single sales might have been better off relying on the quieter, more pop numbers. On the other hand: How many buyers would have bought such pop songs from a 35-year-old bearded man, who could have easily been part of the crew of Captain Ahab’s ship, and in addition to that was dressed underneath the fashionable scarf like a self-indulgent professional cheat in a saloon in the Wild West? 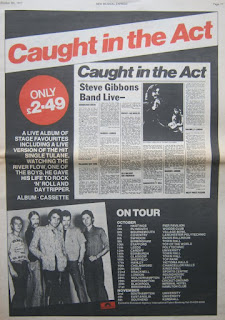 The album was advertised with full-page ads in UK music magazines at a price of £2.49, saying that it would feature stage favourites. The adverts also announced another intensive tour, with no fewer than 21 concerts taking place between 1 October and 5 November (see left).
The itinerary included: Hastings, Plymouth, Bournemouth, Coventry, Swindon, Birmingham, Statford, Leeds, Cardiff, Edinburgh, Glasgow, Sheffield, Hanley, Chelmsford, Derby, Bracknell, London, Wolverhampton, Northhampton, Blackpool, Birkenhead, Southhampton, Eastanglia and Southend. (In a quiz about English geography, Steve Gibbons should probably do very well because of his tour experience).
The album briefly made it into the British LP charts. On 22nd Oct, 1977 it entered the charts at No. 43, climbed to No. 22 the week after and on 5th Nov, 1977 it made it to No. 51 again before it disappeared from the charts again. In Great Britain it was the most successful album of the band regarding the chart placement.
This may surprise some people, because in the perception of many people, some other albums, especially "Down In The Bunker“, are much more prominent. It is also possible that "Down In The Bunker“, which sold very well especially in Scandinavia, sold far more copies internationally and over the years than "Caught in The Act“. 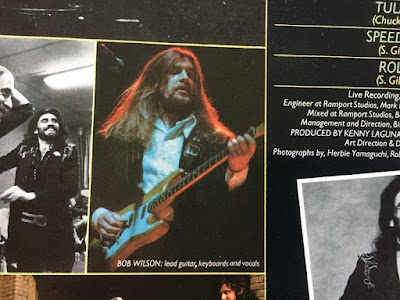 The SGB has released many live recordings over the years, documenting the band in their respective incarnations. Among these, "Caught In The Act“ is the only official recording that gave an insight into the live qualities of the "classic“ line-up of SGB consisting of Steve Gibbons, Trevor Burton, Bob Wilson, Dave Caroll and Bob Lamb. (There is also another live LP of this line-up, which the BBC produced for internal use only. By the way, this line-up was the third personal incarnation of the SGB after the family tree in the book by Jürgen Wanda).

At the same time, at least in retrospect, the album marks the last phase of the SGB with their classic bad boy image. Their follow up album, "Down in the Bunker“ featured a more melodic and acoustic sound, thanks to the influence of their new producer, Tony Visconti. [taken from the Steve Gibbons Story] 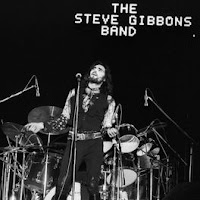 This post was inspired by a chance find - a long lost cassette which I thought I'd lost forever but simply misplaced.  Found the sucker during a COVID lockdown cleanup and decided to celebrate by sharing it here. A quick search on the internet confirmed its lack of availability, so consider this now fixed.
Ripped from Cassette (yep, it stills spins fine) these FLACs bring to life one of my favourite travel tapes when driving around in my first car (a Beetle) back in the late 70's.  Of course, I regret not buying the LP, but the cassette tape was selling cheap at the time and my cash flow was poor.
If you haven't heard this album, then it's time to Catch Them In The Act now!
Tracklist 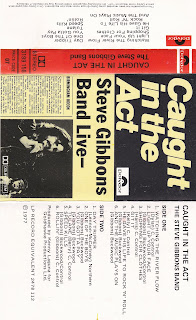