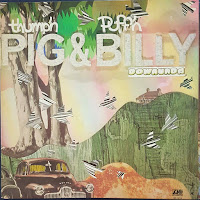 In 1973, Warren 'The Pig' Morgan was asked to do a solo album and he asked Billy Thorpe to be involved. It was primarily Warren's material, but Billy sang and played on all of it and co-produced the album. The result was this hit album entitled "Thumpin' Pig and Puffing Billy" and a single entitled "Captain Straightman b/w Bow My Head" which went to #28 nationally. "Captain Straightman" become an Aztec favourite and was one of their most requested songs when playing live. Thorpe entered this track into an American songwriting contest where it made the finals and as a result Thorpie got his first taste of playing in the USA and this, according to the notes, was the trigger for his move to LA in 1976.
.
The Album
As most readers would know, the notorious duo of Thump'n Pig & Puff'n Billy was none other than piano player extraordinaire Warren 'Pig' Morgan and Billy Thorpe. In late 1972, Morgan was offered an album deal and he invited Thorpie to share the project with him. Calling in their buddies Gil Matthews (drums) plus Barry 'Big Goose' Sullivan (bass) and Phil Manning (guitar), both from Chain, the album sessions got underway at Armstrong Studios with engineer John Sayers. 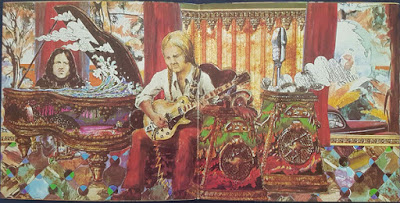 The material flowed freely, with all the musicians enjoying the lively and positive nature of the sessions. This is reflected in the buoyancy and spontaneity of album tracks like 'Moving with Rock', 'You Look After Me, I Look After You', 'Sunny Day', the bluesy 'I've Cried Over You' and the pounding rocker 'Captain Straightman'. 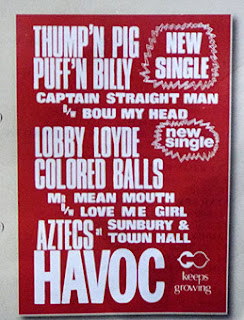 Morgan continues: "When I listened back to songs like 'Bow My Head' there's a bit of religious overtone in there. I don't consider myself religious at all, but I guess there's nothing wrong with writing like that. I was just surprised, T find that quite intriguing because that's not really me. At the same time a composer should be able to write about anything and have no real personal thoughts about it. I did attend a very strict Methodist boarding school, but this is what amuses me because I was thrown out of scripture; I just wasn't interested. But in these songs I'm saying these religious things, so... there you go!"

Havoc issued 'Captain Straightman' as a single in March 1973. It reached #28 on the national chart and has since emerged as a fondly remembered classic. By the time the album Downunda came out in April (on Atlantic; re-issued as Aztec AVSCD004 in 2005), Morgan had rejoined the Aztecs. Thorpie entered 'Captain Straightman' into an American song contest and when it made the finals he got his first taste of playing in the US, all of which precipitated his eventual move to LA in 1976.
. 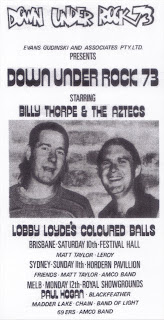 This post consists of FLACs ripped from my prized vinyl copy and includes full artwork and label scans.   I had an autographed copy of this LP with signatures on the front cover by both Billy and Morgan, but chose to sell it off recently for a pretty penny.  Not sure if this was a smart move, but I was happy with the price and it financed some other albums that I didn't have.
.
Track Listing
01 - Captain Straightman
02 - I've Cried Over You
03 - You Look After Me, I Look After You
04 - Morning With Rock
05 - Early Morning
06 - Mothers and Fathers
07 - Just For You
08 - Sunny Day
09 - Bow My Head
10 - Mister Man