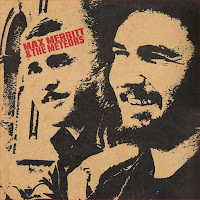 Max Merritt was a star in New Zealand when he came to Australia in 1964. The Meteors bluesy rock fitting perfectly with Merritt's warm growling vocals. In 1967, Max Merritt and his metereors almost died in a car accident. Merritt lost the sight in his right eye and drummer Stewie Speer was hospitalised for four months.
They headed to England were in 1969 they recorded their biggest hit 'Western Union Man' which stayed in the Australian charts for 11 weeks, and peaked at #13 for RCA.
.
MAX MERRITT & THE METEORS
Original (1965) line-up: MAX MERRITT (guitar, vocals); PETER WILLIAMS (guitar); JOHNNY DICK (drums); TEDDY TOI (bass guitar).

Max was born on 30th April, 1941 in Christchurch, New Zealand. He started taking guitar lessons at the age of twelve and eventually formed the Meteors. They began as a part-time group while Max worked during the day as a bricklayer. Max and the band moved to Auckland after a while and began recording. It was at this time that they scored a local hit with a single called, 'Get a Haircut'.
In December, 1964 they came to Australia to do a four week stint at the Rex Hotel in Sydney. The gig was so successful that they decided to stay on. Max and the boys gained immediate respect from both pop fans and fellow musicians. By April '65 they had released their first Australian single entitled 'So Long Baby'.
During their first twelve months or so the line-up experienced many changes, but by early 1966 it had consolidated at Max, Peter Williams and newcomers BRUNO LAWRENCE (drums) and BILL CHRISTIAN (bass). It proved to be the year that the group really put themselves on the map in Australia and they released four singles for the Parlophone label, all of which sold steadily — 'You Deserve What You Got', 'Zip-A-Dee-Doo-Dah', 'Shake'/'I Can't Help Myself, (a double-sider) and 'Fannie Mae'.

By early 1967 they had become perhaps the country's most respected band and Max decided to travel to the UK around August. He completely rebuilt the group in preparation for the trip to consist of STEWIE SPEER (drums), JOHN 'YUK' HARRISON (bass), BOB BERTLES (sax) and of course Max on guitar. (N.B. - Peter joined the Groove.) Then came an unfortunate incident that was to postpone the trip for over six months. In July '67 the band was involved in a terrible head-on motor accident. The most seriously hurt were Max, who lost the sight in his right eye, and Stewie, who was in hospital for four months. However, their esteem in the business was signified by the generous donations which poured in from all sections of the entertainment world.

Late in 1967, they were back on stage and within no time at all they were sounding as good as ever. The next two years saw the consolidation of the group's line-up, an overseas jaunt and also a change of record companies to RCA. In fact in December, 1969 they scored their first national hit with 'Western Union Man'.
In January '70 they experienced their first member change in two and a half years when John left to be replaced by DAVE RUSSELL (ex-Invaders). The change didn't seem to affect their sound and in March they released their best-selling selftitled 'Max Merritt and the Meteors album'.

Then in October 70, they left for a full onslaught of the English market. At first things looked good, but management rip-offs forced Max to let the band go and take on a job in a timber yard. After a while he re-formed with Stewie and two London musicians and they gradually established themselves on the local pub circuit.
Early in 1971 they released another album, Stray Cats and a single from it called 'Good Feeling'. By now their material had developed a more experimental feel as opposed to a strictly soul feel. Another single, 'Hello L.A., Goodbye Birmingham' followed in May '71 and in January '72 they returned for the Sunbury Rock Festival in Victoria.

'Let It Slide' was released for the first time (on RCA) to coincide with their return to London. During this trip they played in the more exclusive venues such as the Windsor Castle, and when they re-visited the Sunbury Festival in January '73, they portrayed a highly professional sound and style.
Back in London they completed negotiations with Arista/Bell Records and put down their first album for the label which was called 'A Little Easier'. The album was released in Australia during October, 1975 and it took the charts by storm as did the single from it, 'Slipping Away'. Another track, 'Mr. Horizontal' was also lifted off the album. 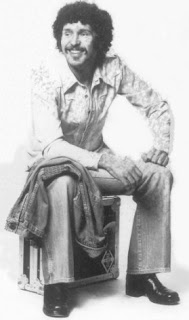 Just prior to their return to Australia for a national tour during May and June, 1976 they released 'Let It Slide' (with 'Whisper In My Ear' on the flip) for the second time. This time the song became a hit. The line-up for the tour was — Max (guitar), Stewie Spears (drums), JOHN GOURD (guitar/piano), HOWARD MARTIN DENIZ (bass), LANCE DIXON (sax). On the completion of their tour they were happy to note that the latest album, Out Of The Blue, had soared into the LP charts.

In February, 1977 Max recorded a live performance at the Dallas Brooks Hall in Melbourne before a crowd of enraptured fans. The resultant LP was released under the title of 'Back Home Live'. Towards the end of the year another change of record label occurred, from Arista to Polydor.

All in all Max Merritt must be one of the most persistent rock legends Australia (and New Zealand) has ever known.   Note:  Bob Bertles remained in Europe and popped up later playing in a German band. (extract from Noel McGrath's 'Australian Encyclopedia of Rock', Outback Press, 1978. p199-2000) 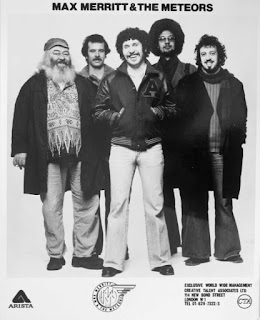 Merritt decided to relocate in Nashville, USA in 1977 and signed as a solo artist with Polydor Records, which released 'Keeping In Touch' in 1978. He then moved to Los Angeles, where he continued to reside, and toured Australia in 1979 and 1980. On the second tour, he put together a band with Stewie Speer on drums, Paul Grant on guitar, John Williams on keyboards, Martin Jenner on guitar and Phil Lawson on bass. This was Merritt and Speer's last major tour together: Speer died of a heart attack on 16 September 1986. Merritt released singles "Growing Pains" in 1982 and "Mean Green Fighting Machine" in 1986, the second was a promotional single for the Canberra Raiders Rugby League team. He toured Australia in 1991 with Brian Cadd (ex-The Groop, Axiom, solo) in the Brian Cadd and Max Merritt Band, which comprised Merritt, Cadd (vocals, piano), John Dallimore (guitar; ex-Redhouse, Dallimore, Jon English Band), Craig Reeves (keyboards), Des Scott (bass) and Dave Stewart (drums; ex-Daniel). In late 1996, Merritt returned to Australia to tour the club and pub circuit.

Merritt toured Australia on a short club circuit in April 2001 along with Doug Parkinson - a fellow veteran rocker from the 1960s. This marked a resurgence of interest for Merritt: April and May were spent touring Australia under the banner "The Heart & Soul of Rock & Roll" with Parkinson; August and September 2002 was the Long Way To The Top - The Concert tour. After that, whenever Merritt returned to Australia, a reformed Max Merritt & The Meteors was in demand for special events and music festivals: Melbourne Music and Blues Festival, The Perth Moonlight Festival, The Veterans Games in Alice Springs, The Queenscliff Festival and The Toyota Muster in Gympie. In April 2006, the group appeared at the Byron Bay Blues Festival and the Gladstone Harbour Festival. 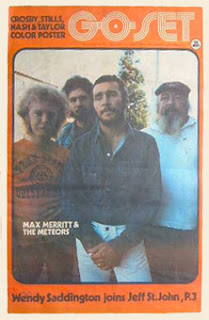 In mid-April 2007, Merritt was admitted to a Los Angeles hospital suffering kidney failure. He was diagnosed as having Goodpasture's syndrome, a rare auto-immune disorder that affects the kidneys and lungs. Merritt was struggling with his health and finances, so his manager, Wal Bishop, along with Australian music industry friends, organised a Concert for Max held at the Palais Theatre,
St. Kilda, Victoria, on 21 October 2007, and raised $200,000. He is currently on a dialysis machine awaiting a kidney transplant and is unable to tour extensively. On 1 July 2008, Merritt was inducted by Glenn A. Baker into the ARIA Hall of Fame. Merritt was joined on-stage by Kasey Chambers and Bill Chambers to perform "Slipping Away" [extract from Wikipedia]
.
This post consists of FLACs and MP3's (320kps) ripped from CD and includes full album artwork for both media. Also included are three bonus tracks, featuring a very early version of "Let It Slide" and some rare live recordings. Although this album is a classic, I personally enjoyed their later 70's releases - 'A Little Bit Easier' and 'Out Of The Blue'. If there is enough interest, I might be coerced into ripping my treasured copies and post them for your pleasure. Anyhow, hope you enjoy the classic album featuring his big hit "Hey, Western Union Man". 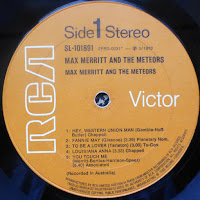