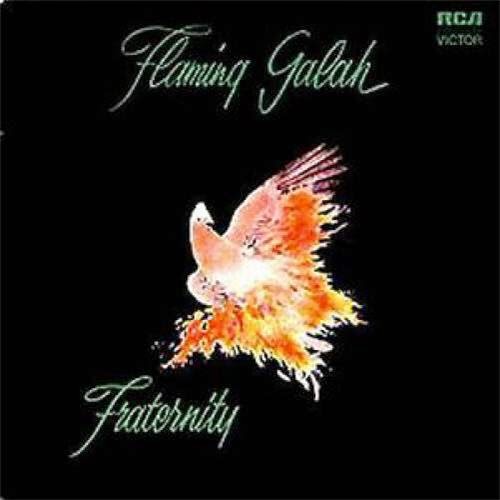 Original line-up: BON SCOTT (vocals); BRUCE HOWE (bass); MIC'KJURD (guitar); JOHN FREEMAN (drums); JOHN AYERS (harmonica); JOHN BISSET (keyboards).
Fraternity formed late in 1970 and based themselves in Adelaide. All the members had previously played with professional bands.
Before long they began recording for the Sweet Peach label and by June 1971, they had released three singles — 'Question', 'Why Did It Have To Be Me' and 'Seasons Of Change' (which was written originally for them by Blackfeather), along with their first LP 'Livestock'
In September Sammy Lee (ex-Flying Circus) joined to become their seventh member (playing slide guitar and piano). They went on to win the 1971 Hoadley's Battle of the Sounds. Meanwhile, they switched record companies to the Raven label. In October, although they had terminated their contract two months prior, Sweet Peach released 'The Race'. The band disagreed with its release as the sound on it was mechanical and not representative of their talents.
Also in October, came their first single for Raven, 'You Got It'. Then in March '72 (after Raven had been taken over by RCA), another single, 'Welfare Boogie' was released, followed by their second album Flaming Galah. But the band couldn't seem to produce hit records and eventually dissolved with Bon turning up later in AC/DC. [extract Noel McGrath's Australian Encyclopedia of Rock, Outback Press, 1978. p 120]

After their first LP 'Livestock' came out, Adelaide businessman Hamish Henry took over management of Fraternity and the group moved to Adelaide. Most of the band took up residence at Hemmings Farm in the Adelaide Hills, where they wrote and rehearsed communally (in the spirit of Traffic and The Band) while Bissett and his wife rented a flat above Henry's art gallery in North Adelaide. Vince Lovegrove reported on the group's new base in the June 1971 edition of Go-Set:

(Fraternity) live like no other band in Australia, in a house in the hills 17 miles from Adelaide. It's surrounded by seven acres of bushland. They're from everything but nature. What a buzz! Once a week they come into the city to have a meeting with their management and collect their pay. They only leave their pad to play gigs.

Bon Scott, vocalist, recorder and timbala player, is constantly in a dream world of his own but he's having a ball. He says: "The point is, the dollar sign is not the ultimate. We want to try and help each other develop and live. So that the thing inside of us, whether it be creative or not, is satisfied. Something makes us tick and it's up to people to satisfy that something. We are satisfying ourselves and others by creating an environment." 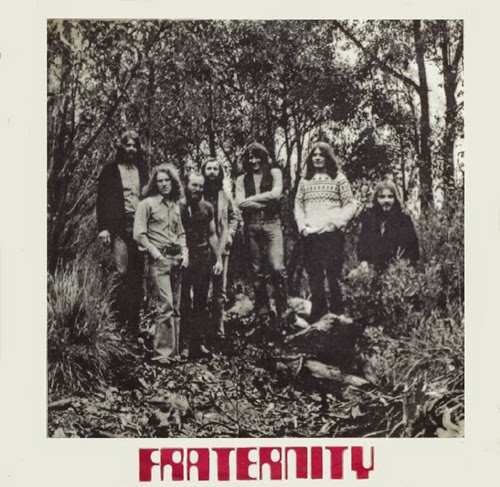 The group's next single "Livestock", "Why Did It Have To Be Me?" b/w "Cool Spot" was issued in January, but did not chart. Their second single became their only major hit -- it reached #1 in Adelaide and made the Top Ten in other cities, but for reasons beyond their control it faced strong competition from the original version by Blackfeather. As noted above, Fraternity had wanted to cover "Seasons of Change" for some time, and with the blessing of David Sinclair and John Robinson, they cut their own version, which was released in March 1971. It would probably have been a major national hit, because John Robinson had generously obtained an undertaking from Infinity not to release Blackfeather's version as a single. Predictably though, as soon as Fraternity's version became a hit in Adelaide, Festival reneged on its promise and rushed out the Blackfeather version as a single.

Two new members joined during 1971, expanding the band to a seven-piece. Harmonica player 'Uncle' John Ayers joined in May, and not long after that the group achieved another career peak, winning the 1971 Hoadley's Battle of the Sounds. Next on board was guitarist-pianist Sam See (ex Sherbet, Flying Circus) who was apparently approached to join Fraternity by Bruce Howe. Sam left Flying Circus at the completion of their Australian tour in September. Flying Circus had relocated to America earlier in the year and they were beginning to build up a following in Canada, where they recently toured, and they returned there after their Australian tour and it eventually became their permanent base.

Two more Singles were released after Sam joined -- "The Race" came out in October 1971 on Sweet Peach, and the same month their fourth single "If You Got It" came out on the Raven label (not to be confused with the present-day reissue company), evidently signalling the end of their relationship with Sweet Peach. 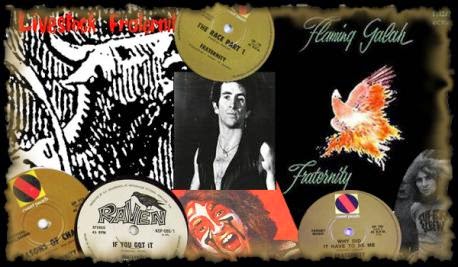 Now augmented by Ayers and See, Fraternity' cut their second album 'Flaming Galah', which came out on the RCA label in April 1972. It was a much rockier album that their debut and featured a distinctive twin-keyboard interplay between Bissett and See. Although songs like "Welfare Boogie", "If You Got It", "Hemming's Farm" and "Getting Off" showed the group moving into a bluesy hard rock style, there were only three new songs alongside re-recorded (albeit superior) versions of earlier songs.

By the time the album had been released, Fraternity were in the UK, having taken advantage of their Battle of the Sounds prize (a free trip to London). Unfortunately, like so many other Australian bands, the dream of 'making it' in the UK proved impossible to achieve. Basing themselves in Finchley, London the group slogged away in the UK and Europe from early 1972 to mid-1973, playing one-off gigs around England and one or two short tours of Germany.

As John Bissett recalled in an interview with the AC/DC website 'Back In Black', Fraternity's sojourn on the punishing UK music scene had the same effect on them as it did on so many other Australian bands:

Our wealthy and benevolent manager, Hamish, transplanted the whole Fraternity community to London. My dog Clutch even joined us after six miserable months in quarantine. In all there were 17 people and a dog living in a house designed for maybe 6 people. It was very cramped and communal and there was a lot of bickering as you can imagine. Each band member had a girlfriend or wife and I also had a young child and a dog. There were also the two roadies, Bob and Rob, Bob's wife and our tour manager, Bruce King. Hamish had also shipped our Fraternity tour bus to London from Australia. The Finchley residents were bemused by the mini greyhound bus parked in the narrow London street.

I remember London rehearsals being very gloomy, unproductive affairs. We had very little money so the booze and drugs supply was severely limited. The whole mood of the band went downhill in London – hag-sub reality began to set in. The party was over. We were not up with the play as far as sound production went. Our PA was inadequate and we lacked the know-how and experience of the UK bands. We supported Status Quo at our first gig. The audience was appreciative and kind but we could not compete with the gear we had.

Other problems inherent in the band became prominent. We had too many members to get a clear sound definition of individual instruments and we lacked good original material. We also had not established a clear musical and cultural niche or direction for ourselves. We were a strange type of country-rock band by this stage. We all tried to write new and better songs but to no avail. I was unhappy on piano but felt like a passenger on a bus that no one in particular was driving, and clueless and powerless to change anything. Things were briefly better in Germany. We focused more on rock for the German audiences and went over quite well. Bon introduced a song or two in German, much to the delight of the audience.

I was the first to jump ship and Sam See followed soon after. The rest (Howe, Jurd, Ayers, Scott and Freeman) carried on for a time as Fang but soon returned to Australia. 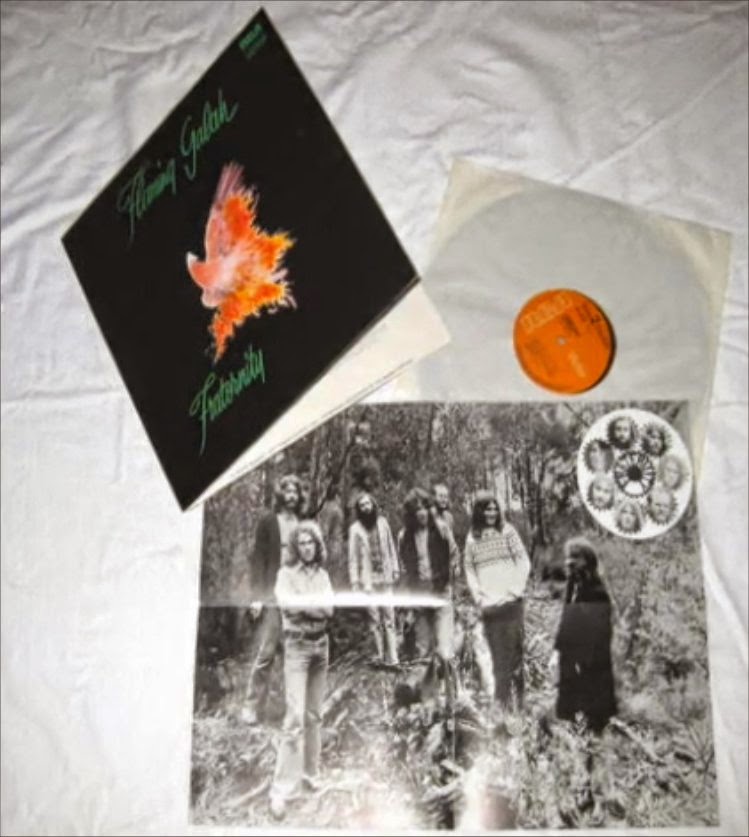 John Bissett was hired and fired from Mungo Jerry then moved into computing for several years. Sam See was contacted by Doug Rowe and headed to Canada to rejoin Flying Circus. The rest of Fraternity returned to Australia and briefly changed their name to 'Fang', but not long after they got back Bon (whose daredevil exploits were already the stuff of legend) was severely injured in a motor-bike accident that almost claimed his life, and he was forced to leave the group and spent many months recuperating.  He collaborated with a group of Adelaide musos, dubbed The Mount Lofty Rangers.

In July 1974 Vince Lovegrove introduced Bon to AC/DC at an Adelaide gig, while the band was touring as support for Lou Reed. They were about to ditch vocalist Dave Evans and Bon was offered his place, but Bon wanted to be the drummer so he turned it down, although he did sign on as their roadie. During a residency in Perth in September Bon 'subbed' as singer when Evans refused to go on; soon after that he was sacked, and Bon was again offered the job. This time he accepted, and the rest is history.

Meanwhile, Howe, Ayers and Freeman had put together Fraternity II in 1974 with Mauri Berg (guitar), John "Swanee" Swan (vocals) and Peter Bersee (violin). Freeman left in mid-1975, so Swan switched to drums and his younger brother Jimmy Barnes briefly took over the new lead singer, but he left soon after, rejoined his earlier band, Cold Chisel and of course went on to become one of the biggest Australian rock stars of the 70s and 80s. Swan left to join Jim Keays' Southern Cross, and later fronted Feather and his own band Swanee.

By late 1975 Fraternity had been renamed 'Some Dream'. Ca. 1978 it was renamed Mickey Finn, which comprised Howe, Ayers, Berg and Joff Bateman. By 1980 John Freeman had rejoined and a second guitarist, Stan Koritini, had been added and this lineup cut a self-titled album for the Eureka label. Mickey Finn released two Singles in 1980 and 1981 before fading from the scene. [extract from Milesago]
.
OK - this post is special because it not only features high quality recordings in both MP3 (320kps) and FLAC, but was freshly ripped from my superb vinyl which I found at the local flee market last week and scored for two bucks!. The only disappointment is that the inside Gatefold was a little roached from moisture damage, but the vinyl is Oh so clean !  A copy of Flaming Galah recently sold on eBay for $1,293 (Aus) - so who's the Flaming Galah now !
Full album artwork is included (thanks to Mick from Midoz for this) along with label scans from my vinyl.
This is certainly an album not to be missed - especially if you are a fan of Bon Scott / ACDC.
. 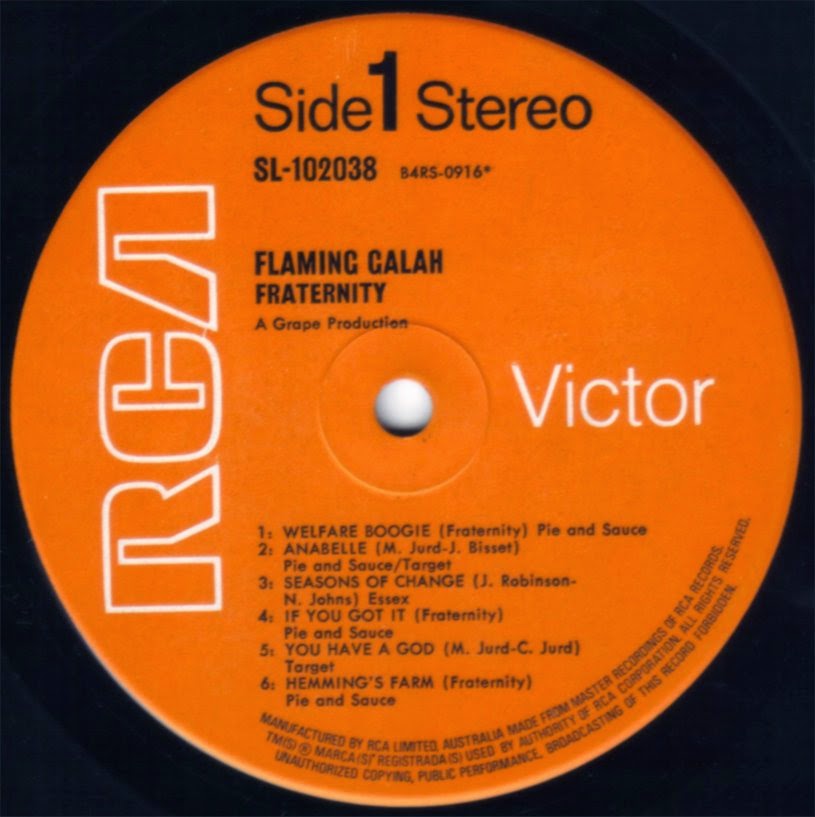 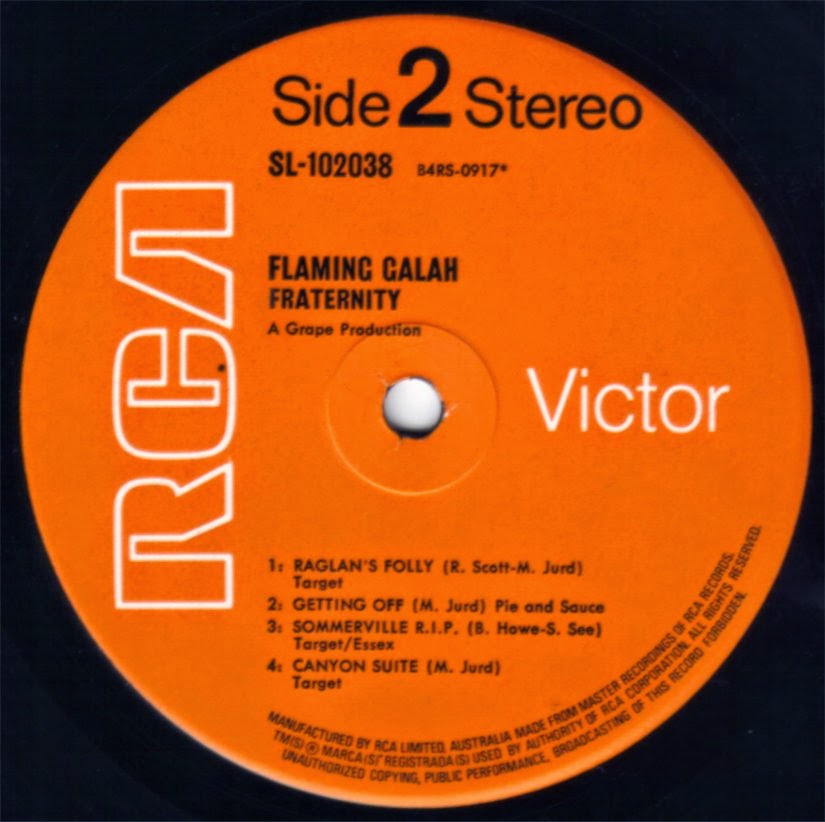