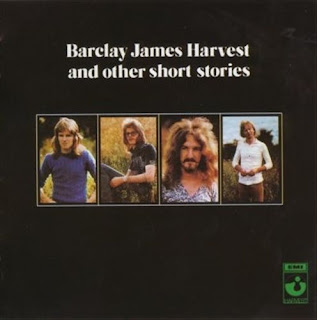 Barclay James Harvest is a British group, formed in early 1967 around Oldham, Lancashire area from the ashes of two separate choral groups. Wolstenholme and Lees meet one another at art school together, signing to EMI's progressive label Harvest the following year (EMI reputedly named their new label after them). They developed a symphonic style characterised by intricate keyboard-guitar interplays, and close vocal harmonies. They released their first album in the U.K.in 1969.
Line-up has remained intact since inception, as has music, which fits loosely into "flash-rock" categorization, leaning heavily on Wolstenholme's use of mellotron and keyboards. Barclay James Harvest quickly established a large and faithful following throughout Europe, an orchestra performing with the group on some gigs. Although not always favoured with critical approval, Barclay James Harvest have on a number of occasions (for instance, when they switched labels in U.K. to Polydor) appeared to be on brink of major commercial breakthrough.
In U.K., however, are established as consistently in-demand gigging band with relatively small but ardent following. Second, third and fourth albums, as listed below, first released in U.K. 1970, '71 and '72. Albums five and six both released 1974. Time Honoured Ghosts (1975) cut in San Francisco under producer Eliot Mazer, followed by Octoberon in Oct '76. 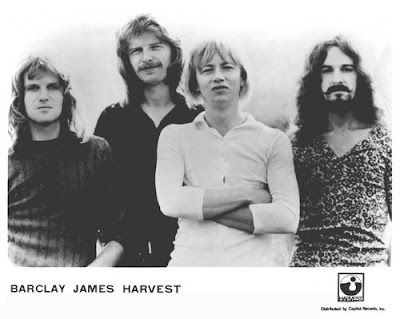 With a career spanning 20 albums over a quater of a century, they have continued to live in the shadow of other symphonic rock specialists such as Yes, ELP and Genesis.
Ignoring passing trends and rejecting gimmicky stage effects, they remained true to their own beliefs through Wolstenholme's departure after 1978's album 'XII' reduced their songwriting potential.
The melodic and often lightweight studio work belies their powerful and atmosphericlive performances as demonstrated by the 'LIve Tapes' album released on Polydor in 1978. 'A Concert For The People' (1982), recorded at an open-air concert in Berlin, drew a record crowd. British fans, however, remained indifferent.
. 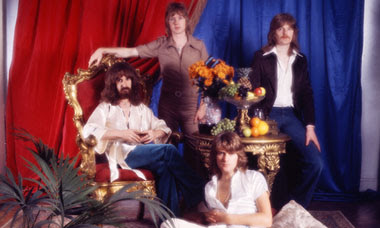 .
The band continued as a trio with regular guest musicians until 1998. One album, Welcome to the Show, released in 1990, was released under the abbreviated name BJH. However, because of criticism from fans, the full Barclay James Harvest name was restored, albeit with the inclusion of the BJH moniker.
In 1998, musical differences amongst members of BJH saw the band essentially split into two different groups, both of which retained "Barclay James Harvest" as part of their names. John Lees released an album mixing new songs and BJH classics, entitled Nexus, under the band name "Barclay James Harvest through the eyes of John Lees". Woolly Wolstenholme played in (and composed for) this band, subsequently resurrecting Maestoso to record and tour with new material, as well as back-catalogue favourites. Les Holroyd and Mel Pritchard teamed up to record under the name "Barclay James Harvest featuring Les Holroyd". Lees and Wolstenholme recently (2006/7) toured under the slightly modified band title "John Lees' Barclay James Harvest".
Mel Pritchard died suddenly of a heart attack in early 2004. Woolly Wolstenholme took his own life in December 2010, having apparently struggled with depression for many years.
The two derivatives of Barclay James Harvest continue to record and tour to this day, and enjoy ongoing popularity, particularly in Germany, France, and Switzerland. [extracts from the 'Ultimate Encyclopedia of Rock', 1994 and Wikipedia]
Album Review (by Dave Connolly)
'BARCLAY JAMES HARVEST AND OTHER SHORT STORIES' is the fourth album by gentle U.K. folk-psych-prog group Barclay James Harvest, and was eleased in 1971.
Like the work of Buffalo Springfield or the Moody Blues in the first go 'round, you'll need to take it on faith that the Baroque touches on Barclay James Harvest and Other Stories were effective for their time. The fuzzed guitars, Mellotron, bongos, heavy orchestration and dreamy arrangements may sound alittle stilted today, but strip them away (or simply acquiesce to enjoy them) and a very good collection of songs reveals itself. 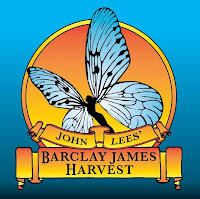 There are obvious nods to the Beatles ("Blue John Blues," "Medicine Man") and the Moody Blues (the lovely "Ursula"), but that's a fait accompli on any Barclay James Harvest album. Although the album doesn't really tell any stories (an optimistic acceptance of mortality comes into play on a couple of tracks), the band does aspire to bigger things on the aptly titled "The Poet." The only knock on this album (and it pertains to Barclay James Harvest in general) is that you wish they aspired to more. The classical arrangements are stunning, and when the band musters a big orchestral ending for a song like "Little Lapwing," you can't help but wonder how much better it would have been if they'd invoked it sooner. Musically the band is solid; Mel Pritchard's Ringo-isms on the drums are especially neat, while John Lees gets in some nice distorted guitar parts and Stewart Wooly Wolstenholme steals the show when the Mellotron comes into play. The epic "After the Day" closes things on a high note, ending with an explosion that announces all bets are off. Barclay James Harvest and Other Stories is itself a high note in the band's early catalog and worth a flyer for anyone interested in the band's oeuvre.
This post consists of an MP3 (320kps) rip taken from a friends CD and includes full album artwork along with some choice photos of the band in the early 70's. (NB. The live photos from their 1974 Reading Festival gig were sourced from ukrockfestivals.com with thanks).
I choose not to rip my vinyl, as it has seen better days. I purchased it 2nd hand some 30 years ago, and have really played it to death however I was lucky enough to source a CD copy for this posting. I particularly like the second side with the last three tracks being their swansong in my opinion. This album appealed to me for its wonderful symphonic and progressive rock style and I still enjoy what it has to offer more than 40 years after it's release date. Hope you enjoy it too.
.
Tracks Listing