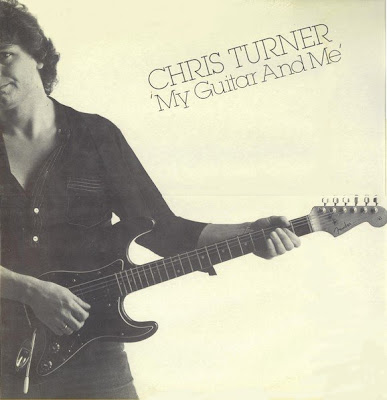 Chris Turner is a London born guitarist, who started playing in 1961 around the London rock scene at the Hofner Club. He appeared on the same bill as Bowie, Frampton and The Small Faces with Steve Marriot. His band also did shows with John Mayall, and Manfred Mann to name just a few. He also played the Mecca Ballroom Circuit with his band The Consorts until 1965.
The late sixties saw the’ Chris Turner Group’ and 'The Wranglers' emerge in Auckland, New Zealand where he toured the North Island learning his trade not only as a guitarist but also as a band leader. He did a stint with hit band 'Summer Wine' and 'The Soundelles', Aukland's only professional band at the infamous Oriental Ballroom.
In 1970, Chris moved to Sydney, Australia. He signed up with a package show called ‘The Action’ and set of on a tour of The Philippines and Vietnam, barely escaping with his life!
On his return from overseas, Chris again formed his own band and toured New South Wales and Queensland, one tour lasting over 18 months.
In 1973, his eight piece band ‘Drain’, which featured two 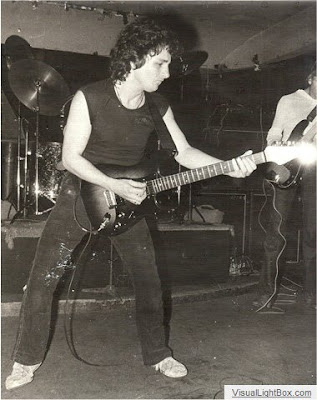 drummers and a horn section, worked around the Sydney hard rock clubs, including the world famous 'Chequers Night Club'.
In 1974, Chris was asked to join heavy rock band ‘Buffalo’, recording and writing the title track on the fifth album ‘Average Rock n’ Roller ‘. Buffalo did numerous radio and television spots and toured Australia with ‘Richie Blackmores’ Rainbow.
Throughout this time Pete Wells and Digger Royal (Rose Tattoo) were stable members of 'The Chris Turner Band' which could be seen every Monday night at the infamous night club Chequers from late till dawn.
‘The Chris Turner Band’ continued to work and tour throughout the late seventies with Chris taking time out to work with ‘Rose Tattoo’, F J Holden and the Easybeats’ Stevie Wright. Literally hundreds of musicians past through Turner's band as it relentlessly toured Australia.
. 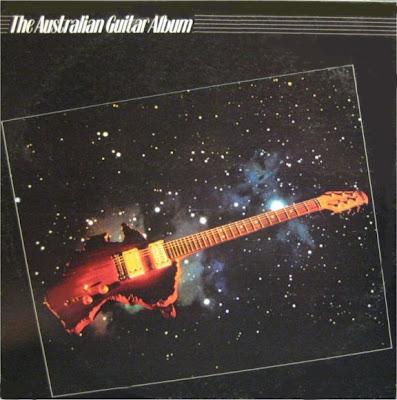 Chris was asked to record a track for ‘The Australian Guitar Album' (see left) and also featured on the ‘Concert Of The Decade ‘with F J Holden. His solo album, ‘My Guitar & Me' was released in 1980 and his band toured constantly. 1982 saw Chris release his only ever single "I’m Crazy" – his band continued to tour !
The following year, Chris teamed up again with La De Da’s veteran Ronnie Peel (Rockwell T James) to form the Scattered Aces. The ‘Aces’ released a single"Waltzing Matilda" / "C’mon Everybody" followed by the EP ‘Six Pack’, a rollicking good example of Aussie Pub rock.
Rose Tattoos’ Pete Wells augmented the line up along with Turner’s ex manic drummer, Paul Demarco ( Fred Zeppelin )
Turner and Peel surfaced with ‘Slightly Shady ‘and ‘The Chris Turner Band ‘continued!
Chris did countless sessions on radio and TV ads and produced the Lucy De Soto Album ‘Three Girls And A Sailor'
Together with Status Quo’s Alan Lancaster, Chris recorded ‘Exile’, a rock album featuring many of Chris’s friends. Chris did some recording with the Party Boys and was featured on the hit album ‘Hold Your Head Up”.
. 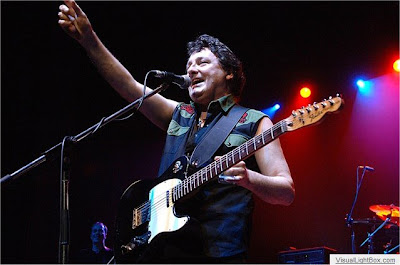 In the late eighties, Chris recorded and produced the BB Strutt album ‘Four Play’ and toured with the band promoting the product. Chris also worked his bands ‘The Tom Cats ‘,'The Wasted Seamen'and ‘The Wolf Tones’ around NSW.
Chris produced the Adam Carl Stephens album ‘Skybrain Surfing’ and was featured on the Pete Wells album ‘Orphans’ as well as playing on albums by Rick Veneer and Tony Ryan.
Chris established The College Of Contemporary Guitar in Sydney and underwent major hand surgery.
“Natural Born Trucker ‘– Truckin’ Bill n’ Doc Guitar was Chris’s next project, the album receiving national air play and the title track was included on a compilation album called “Trucking Towards 2000” which included many overseas legends.
Stacey Morris’s CD ‘The Sweetest Thing’ and Will Scarlet’s ‘Wanted It That Way’ were two more Turner projects together co-producing ‘Shadows To The Max’ for Max Paton.
Chris Turner’s current album – ‘Guitar Stories Vol. 1’ is an instrumental record with the ‘stories’ included on the twelve page slick.
Chris produced ‘Tribute To Roy Orbison’ with The Tee Jays and Robin Lee Sinclair This is currently sold out!
. 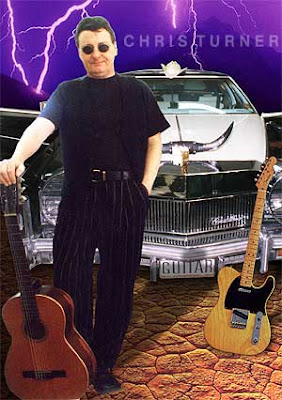 Chris Turner & The Wolftones were asked to perform at the ‘Gimme Ted’ concert at Fox Studios in March 2001. This was a benefit to raise money for fellow muso Ted Mulry who was suffering from cancer. Unfortunately Ted died before the money could be used and Chris Turner’s performance was mysteriously not included on the DVD!
Chris then released ‘No Bollocks – Just Rock!’ with The Wolftones, produced by Rose Tattoo’s Peter Wells. This album is Pub Rock at its finest and shows Chris at his rockin’ best. This album contains the notorious track "Have A Nice Day”, an underground hit for Chris.
.
In 2004, Chris completed a blues album with Pete Wells & Rob Grosser titled ‘Three Good Reasons For the Blues’ The Band is called ‘Rocks Push’ and was featured at The Manly Jazz Festival. A DVD of this band and the making of this CD are planned for the future.
He was also a featured guest artist on “Sydney Blues Live” CD with Tim Gaze and Rob Grosser and his version of “King Bee” is receiving a lot of airplay in the US.
Chris Turner is currently working live with The Blues Pirates and The Wolf Tones. He also works as a freelance guitarist and does solo spots whenever time allows. He is recording three albums at this time: The Blues Pirates – “Skullduggery”, ‘A Little Bit Country’ and ‘Guitar Stories Vol. 2’.
Chris Turner’s Blues Pirates were asked to open the show for the Pete Wells benefit concert, Rock & Roll Outlaw', held at The Enmore Theatre in September 2005. The show featured a cast of thousands including Rose Tattoo, The Angels, Lucy De Soto and Dave Tice (ex-Buffalo).
As of 2010, Chris continues to work and record with The Cave Men around Sydney. A Cave Men album is imminent [extract from Big-Rock.com.au]
.
Review 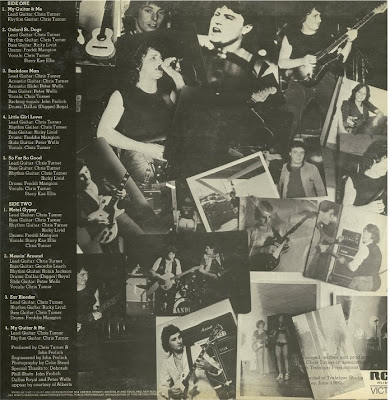 Released in 1980, this is the first solo album by Chris Turner who was the guitarist in
Australian rock bands Rose Tattoo and Buffalo.This great Australian blues/rock album also features Peter Wells, Dallas (digger) Royal and Geordie Leach all from Rose Tattoo. Fantastic guitar playing from Chris Turner as well as great slide guitar from Peter Wells.
The music on this album is similar to The Angels but lacks the strength of Doc Neeson's vocals. Having said this, Chris Turner can still belt out a tune and the lyrics to songs have a distinct Sydney flavor to them (ie. Oxford St. Dogs). All tracks are credited to Turner and he shows great diversity with his writing style, ranging from rocking 12 bar blues to laid back acoustic blues to pure unadulterated 'Boogie'. My favourite tracks would have to be "Oxford St Dogs" and "Ear Bleeder". Not a well known album, but a classic none the less. If you like guitar work, you'll like this album.
.
Trivia
Chris is a luthier (repairs stringed instruments) and has built guitars for many people. The Australian Guitar Album had a guitar shaped like the continent of Oz (sans tassie) on the cover. Chris built that as well as a white Playboy rabbit head guitar on a very early Australian Playboy cover.
Chris's skills as a guitar maker led to him developing an act (the Chris Turner Band) where he smashed up a surreptitiously donned replica of his strat at each show. He'd repair it (sometimes with a new neck) and then do it all again. I remember a show back in 1978, at French's Tavern in Oxford St when he shoved the head stock through the canite stage ceiling and walked offstage and it just hung there, feeding back, until the roadie got up there and turned the volume
knob down. Note: 'Ricky Livid' was an alias that Chris Turner sometimes played under [thanks to Phil Jensen at Midoztouch for this trivia]
Another piece of trivia [thanks to Ice at Midoztouch] - The cover of the AC/DC album "Let There Be Rock" shows some fingers on a guitar fretboard. The fingers belong to Chris.
.
This post consists of a MP3 (320kps) and FLAC rip taken from my vinyl and includes album artwork and label scans. As a bonus, I have included Chris's track from the Australian Guitar Album called "Rock And Roll Man". When I purchased this album as a teenager, I had no idea who Chris Turner was - I just liked the music when I heard it played at a party. This album is hard to find and sits along side my other Aussie Rock treasures.
.
Track Listing 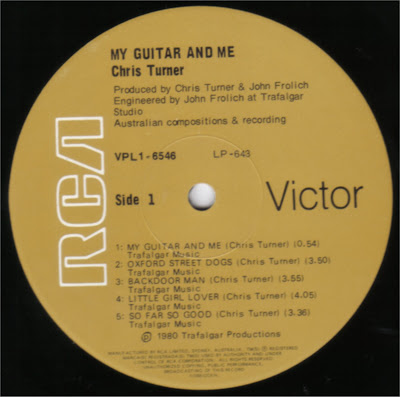