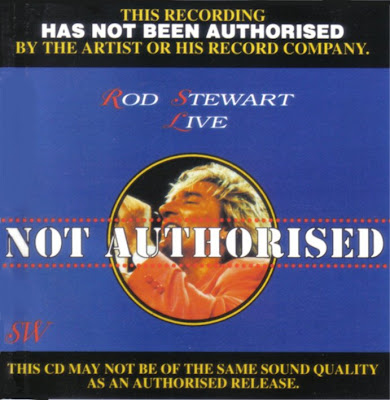 When Steve Marriott left the Small Faces to form Humble Pie in 1969, the addition of gravel-voiced vocalist Rod Stewart and guitarist Ron Wood, who had played together in the Jeff Beck Group, relaunched the band as the Faces. A ramshackle fusion of rock and blues with excellent songwriting by Stewart brought success with 'A Nod's As Good As A Wink' in 1971. This was outstripped by Stewart' s parallel solo career when 'Maggie May/Reason To Believe' from his 'Every Picture Tells A Story' album topped the transatlantic charts.
The Faces dissolved, Stewart relocating to the States and becoming a superstar with 1975's 'Atlantic Crossing'. The single 'Sailing' from this album was a UK Number 1 . Lane, who later contracted MS, was replaced by Tetsu. Then Wood joined the Rolling Stones (this was claimed by Stewart to have precipitated the break-up) while Jones joined the Who.
. 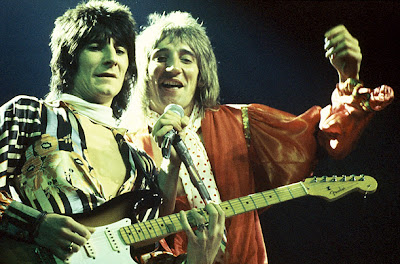 After the all-conquering disco chart-topper 'Do Ya Think I'm Sexy?' in 1979, Stewart cruised successfully through the Eighties, at the same time becoming a regular target for the gossip columns with his "Jack the lad" lifestyle. Occasional hits included Tom Waits' 'Downtown Train' (a transatlantic Top 10 hit in 1990) and in 1992 Tom Traubert's Blues'.
The Faces were: Rod Stewart - vocals, Ronnie Wood - guitar, lan McLagan - keyboards, Ron Lane - bass, and Kenney Jones on drums [Extract from The Ultimate Encyclopedia of Rock, p 99 Edited by Michael Heatley, 1994]
. 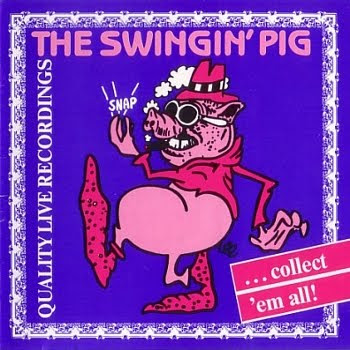 This AMCOS Australian release would appear to be the same recording as the bootleg "Real Good Time" (The Swingin' Pig) although track 4 "Fly In The Ointment" is actually called "Too Bad" (see stonesvikingrob.com). The cover of this Swingin' Pig bootleg is shown below.
Now after much researching, there appears to be a huge discrepancy regarding the location of this Swingin' Pig recording, as "Woodworks 1957-1975 The Rolling Stones Database" by Nico Zentgraf places Ronnie Woods playing with the Faces in November, 1974 in England (Newcastle, England, Odeon) on their British Tour (see www.nzentgraf.de). Many websites incorrectly site this concert from 1974-11-27 - Cobo Hall, Detroit.
Instead, this recording actually comes from "The Swing Auditorium at San Bernardino", California, March 7, 1975. The whole show was recorded by US Radio and was broadcast at a later date on the King Biscuit Flower Hour (see 7th March, 1975 entry at the-faces.com)
A far more complete version of this concert can be streamed at www.wolfgangsvault.com. It includes "Take A Look At The Guy", "Angel", and "I Can Feel The Fire". Plus, "I'm Losing You" is unedited, with Kenney Jones' thundering 3:30 drum solo is still intact.
. 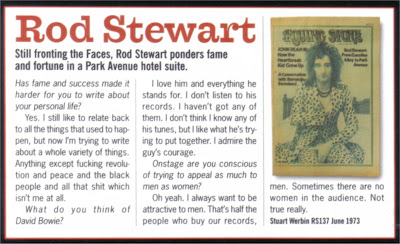 (Extract from Rolling Stone, May 2002 - 30 Years of Rock & Roll)
.
This post consists of a rip taken from CD (320kps) and includes full album artwork (for both bootleg titles). This bootleg is more than likely a copy of the 1989 Swingin' Pig release called 'Rod Stewart and the The Faces - Real Good Time'. The recording is excellent and should not be missed, particularly if you are a Faces fan.
.
Track Listing01. (I Know) I'm Losing You02. Bring it on Home to Me03. Sweet Little Rock'n Roller04. Fly in the Ointment [really Too Bad] 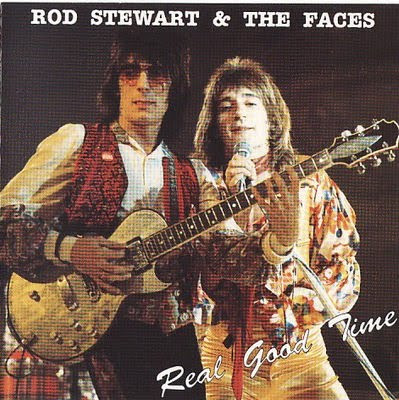