(Various Popular / Classical Artists 1971)
.
Before things get too serious here at Rock On Vinyl, I thought it might be fun to post a song / album at the end of each month, that could be categorized as being either Weird, Obscure, Crazy or just plain Korny.
. 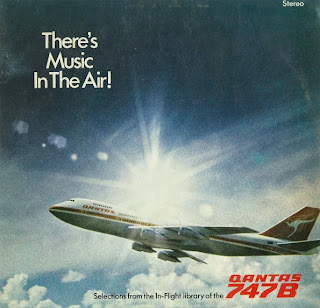 For this months WOCK on Vinyl, I am posting something completely different from the norm and consider this album to be very Obscure (and rare). Therefore, it fits the WOCK on Vinyl criteria perfectly. Firstly, a little bit of background information about the featured Boeing 747B Airliner and its association with the Australian airline Qantas
Qantas is Australia's largest airline and one of the oldest airlines in the world. Qantas was founded in Winton, Queensland on 16 November 1920 as Queensland and Northern Territory Aerial Services Limited by Paul McGinness, Hudson Fysh, Fergus McMaster and Arthur Baird.
In 1967 the airline placed orders for the Boeing 747. This aircraft could seat up to 350 passengers, a major improvement over the Boeing 707. Orders were placed for four aircraft with deliveries commencing in 1971. The later delivery date 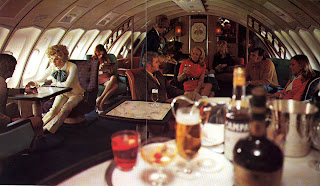 allowed Qantas to take advantage of the -200B version, which better suited its requirements. Also in 1967, Qantas Empire Airways changed its name to Qantas Airways, the name of the airline today (extract from Wikipedia).
.
In 1969, the world saw a new giant of a plane: the Boeing 747. Airlines around the world bought the 747, in droves. Qantas however waited. waited because Boeing already had a new 747 on the drawing board: the 747B. Boeing and Qantas worked...planning for a bigger upstairs lounge, experimenting with seat designs, reducing the number of seats to make more room or shaver bars, extra washrooms, bassinets. coat closets. 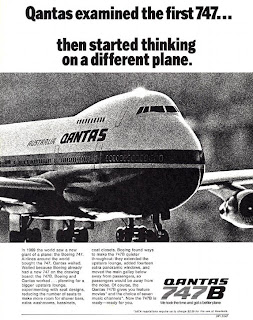 Boeing found ways to make the 747B quieter throughout: they extended the upstairs lounge, added fourteen extra panoramic windows, and moved the main gallery below away from passengers, so passengers would be away from the noise. Of course, the Qantas 747B gives you feature movies and the choice of seven music channels (of which some of their standard music selections are contained on this record)
.
The music on this album has certainly aged from the time of its release, and to be honest, it's not really my cup of tea. However, I would imagine that some of this music (a mixture of 50's - 60's classical and popular selections) might appeal to those of you who can remember flying in the first 747's and bring back some enjoyable memories.
If you think about it, air flight hasn't really changed that much since the first 747's got off the ground - there is still Business or Economy Class, Flight Hostesses still dress up in daggy outfits (although the profession is no longer limited to females) and we are all still completely amazed as to how these monsters actually get off the ground in the first place.
But one thing I do know... the In-Flight music selections in 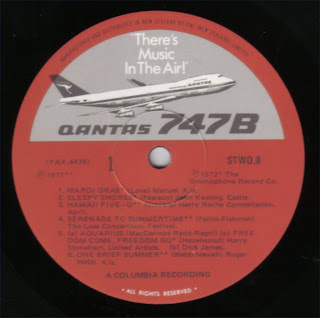 the current Jumbo Jets are a little more with the times !
.
If you are a collector of music, then there is probably very little here for the taking (except perhaps for the original Hawaii Five-O theme music or the theme to the 'Aquarius' rockshow), but if you are looking for some real nostalgia - then this album is for you. Oh, and I really dig the custom record label on this album.
Post consists of mp3 ripped at 320kps, taken from Vinyl and includes full artwork, including a wonderful gatefold picture of the 747B in flight.
So please, take your seat, put on your seat belts, extinguish your cigarette.... and its Up, Up, and Away we go!
.
Track Listing
01 - Mardis Gras (Manuel And His Music Of The Mountains)
02 - Sleepy Shores (John Keating And The London Symphony Orchestra)
03 - Hawaii Five-O (Harry Roche Constellation)
04 - Serenade To Summertime (Joe Loss And The Concertium)
05 - Aquarius / Freedom Come Freedom Go (Harry Stoneham)
06 - One Brief Summer (Roger Webb)
07 - Do You Know The Way To San Jose (Ron Goodwin & His Orchestra)
08 - Everybody's Talkin' (Harry Pitch)
09 - The Boy Friend (The Original Brasso Band)
10 - Dancing In The Sun (Pepe Jaramillo & His Latin American Rhythm)
11 - Pacific Paradise (Wout Steenhuis & The Kontikis)
12 - Gold And Silver Waltz (Semprini)
.
Qantas 747B Link (88Mb)  New Link 20/09/2018
.
Posted by AussieRock at 9:16 PM