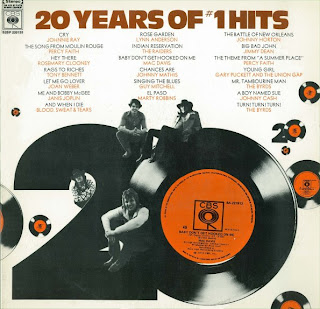 Columbia Records is an American record label, owned by Japan's Sony Music Entertainment, operating under the Columbia Music Group with Aware Records. It was founded in 1888, evolving from an earlier enterprise, the American Graphophone Company — successor to the Volta Graphophone Company. Columbia is the oldest brand name in pre-recorded sound,being the first record company to produce pre-recorded records as opposed to blank cylinders. Columbia Records went on to release records by an array of notable singers, instrumentalists and groups. From 1961 to 1990, its recordings were released outside the U.S. and Canada on the CBS Records label (for Columbia Broadcasting System, its parent from 1938 to 1988) before adopting the Columbia name in most of the world.
Until 1989, Columbia Records had no connection to Columbia Pictures, which used various other names for record labels they owned, including Colpix and later Arista; rather, it was connected to the original owner, CBS, which stood for Columbia Broadcasting System. Though Arista was later sold to BMG, it is now a sister label to Columbia Records through Sony Music; both are connected to Columbia Pictures through Sony Corporation of America, worldwide parent of both the music and motion picture arms of Sony [extract from wikipedia]
.
Twenty years of good music is exceptional. 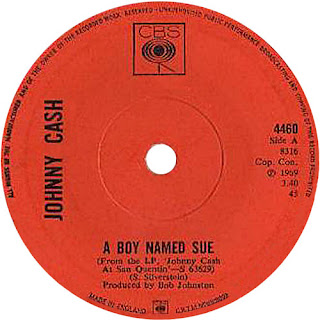 The selections included in this set began their birth and aging process two decades ago with the original release of Johnnie Ray's "Cry." Growing a little less mellow, but perhaps more relevant, culminating in the rock realism of Janis Joplin. The trademark performances gathered here represent important turning points in the artists' careers. The records document the times and the changes.
During the 60's the emphasis shifted from the single artist like Tony Bennett and Johnny Mathis to the group sound. Witness the musicality of Blood, Sweat & Tears and The Byrds. A new style was adopted. Composers were recording their own tunes. Johnny Cash's country roots evolved into "A Boy Named Sue." The responsibility for the success or failure of a record now rested with the artists themselves. The new and the old, bobbie-socks or bell-bottom blues, those were the good old days and perhaps still are. There will always be a place for the pure entertainment and enjoyment of music whether it be the late 50's or the early 70's. Listen and span the last twenty years of American musical history.
These albums offer music you can dance to, remember with, and look forward to over and
over again. Grow old gracefully with Twenty Years of #1 Hits [Diane Hyaft, Linear Notes]
. 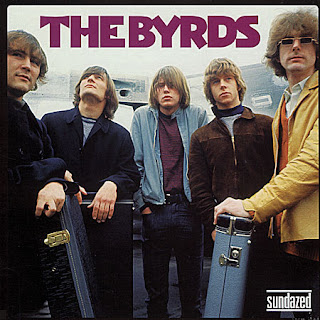 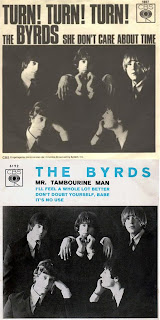 by critics to be one of the most influential bands of the 1960s. Initially, they pioneered the musical genre of folk rock, melding the influence of The Beatles and other British Invasion bands with contemporary and traditional folk music. As the 1960s progressed, the band was also influential in originating psychedelic rock, raga rock, and country rock.
"Turn! Turn! Turn!" was the third single by the American folk rock band The Byrds and was released on October 1, 1965 by Columbia Records. The song was also included on the band's second album, Turn! Turn! Turn!, which was released on December 6, 1965.
The Bob Dylan penned "Mr. Tambourine Man" single was released ahead of the album in April 1965, reaching #1 on both the Billboard Hot 100 and the UK Singles Chart.
.
. 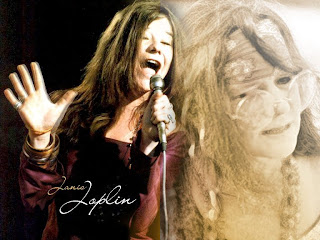 Janis Joplin
Janis Joplin (January 19, 1943 – October 4, 1970) was an American singer and songwriter from Port Arthur, Texas. She was dubbed the first queen of rock 'n' roll, and her voice is singular. She was rough around the edges, vulnerable and charismatic, and she paved the way for countless women in rock.
Joplin first rose to prominence in the late 1960s as the lead singer of the psychedelic-acid rock band Big Brother and the Holding Company, and later as a solo artist with her more soulful and bluesy backing groups, The Kozmic Blues Band and The Full Tilt Boogie Band.
.
"Me and Bobby McGee" is a song 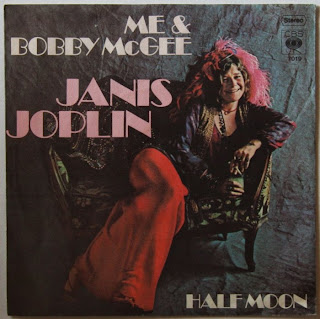 written by Kris Kristofferson and Fred Foster, originally performed by Roger Miller. Others performed the song later, including Kristofferson himself, and Janis Joplin who topped the U.S. singles chart with the song in 1971 after her death, making the song the second posthumous number-one single in U.S. chart history after "(Sittin' On) The Dock of the Bay" by Otis Redding.
.
. 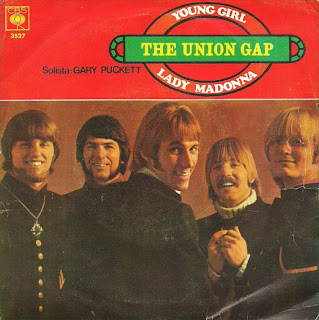 Gary Young and the Union Gap
Gary Puckett & The Union Gap (initially credited as The Union Gap featuring Gary Puckett) was an American pop rock group operating in the late 1960s. Their biggest hits were "Woman, Woman," "Young Girl," and "Lady Willpower."
Although the band never had a #1 record in the United States, "Young Girl" reached #1 on the UK singles chart, and #6 when it was reissued in the UK six years later. Controversial at the time and later for its risqué lyrical references to underage romance, Allmusic labeled the groups lyrics "bizarrely pedophilic".
"Young Girl" was the second million selling disc for the band, which it reached less than two months after its issue
.
Blood, Sweat & Tears 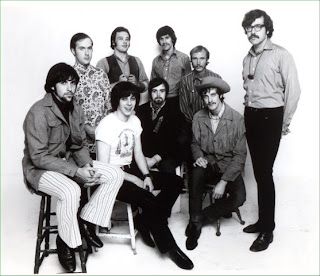 Blood, Sweat & Tears was an American music group, originally formed in 1967 in New York City. Since its beginnings in 1967, the band has gone through numerous iterations with varying personnel and has encompassed a multitude of musical styles. Founder Al Kooper conceived Blood, Sweat and Tears as an experiment in expanding the size and scope of the rock band with touches of jazz , blues , classical , and folk music. When Kooper was forced out of the band soon after its eclectic debut, Child Is Father to the Man, BS&T became increasingly identified as a "jazz-rock" group, although its music was essentially easy-listening rhythm and blues or rock with the addition of brass.
"And When I Die" is a song written by American singer Laura Nyro and is probably best known for its cover version by Blood, Sweat & Tears, which reached #2 on the U.S. Billboard Hot 100.
. 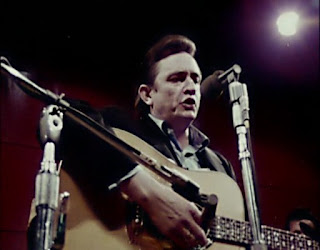 Johnny Cash
John R. "Johnny" Cash (February 26, 1932 – September 12, 2003), A.K.A. "The Man In Black", was an American singer-songwriter, actor, and author, who has been called one of the most influential musicians of the 20th century. Although he is primarily remembered as a country music artist, his songs and sound spanned many other genres including rockabilly and rock and roll—especially early in his career—as well as blues, folk, and gospel.
Cash felt great compassion for prisoners. He began performing concerts at various prisons starting in the late 1950s. His first ever prison concert was held on January 1, 1958 at San Quentin State Prison. These performances led to a pair of highly successful live albums, Johnny Cash at Folsom Prison (1968) and Johnny Cash at San Quentin (1969). 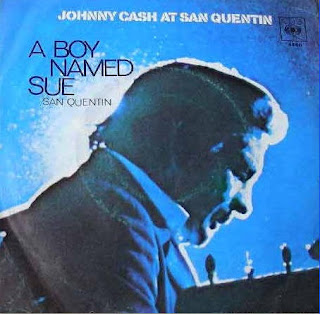 The San Quentin record included the crossover hit single "A Boy Named Sue", a Shel Silverstein-penned novelty song that reached No. 1 on the country charts and No. 2 on the U.S. Top Ten pop charts. The AM versions contained a couple of profanities which were edited out. The modern CD versions are unedited and uncensored and thus also longer than the original vinyl albums, though they still retain the audience reaction overdubs of the originals.
.
Here's another record sampler, this time from CBS records. The title implies that all 20 tracks were Number 1 Hits, however, I'm not sure if this is 100% accurate. For example, the Blood, Sweat & Tears hit "And When I Die" only reached #2 yet it was included in this compilation?
One notable oversight with this double album is the exclusion of any Simon & Garfunkel hits, yet they were one of CBS's most successful artist. Therefore, I have chosen to include their #1 hit "Sounds Of Silence" as a Bonus Track to fix this oversight. The post consists of a rip (320kps) taken from vinyl and includes full album artwork.
.
Track Listing01 - Cry (Johnny Ray)02 - The Song From Moulin Rouge (Percy Faith)03 - Hey There (Rosemary Clooney)04 - Rags To Riches (Tony Bennett)05 - Let Me Go Lover (Joan Weber)06 - Chances Are (Johnny Mathis) 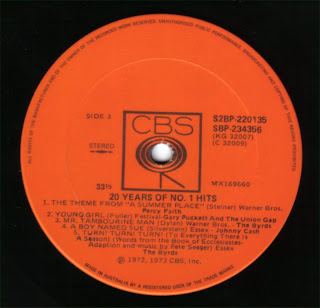