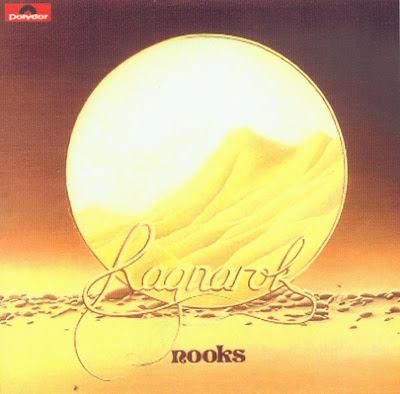 Founded Feb 1974, Auckland, formed from a North Island hotel circuit band called ‘Sweetfeet’
Ragnarok started playing at local hotels, including the Mon Desire in Takapuna where their first costume foray of hotpants and tights drew in very big crowds. They started a successful residency at Granny’s Night Spot (owned by Tommy Adderley) where the 1st album was created during ‘days off’.
Applying glitter, dressing loud and developing a song list of Pink Floyd, Led Zeppelin and Yes, they formed Ragnarok. They quickly established themselves as being the ultimate acid band of the mid-seventies. They were right into synthesizers, where their instruments featured guitar synthesizers, keyboard synthesizers and mellotron. They all shared the vocals, but were also very fortunate to have one of the finest female vocalists around at the time, Lea Maalfrid, as a member of the group
They recorded a self titled album ‘Ragnarok’ in 1975 at Stebbings Recording Studios in Auckland (See previous Post). The style of music (coined Cosmic Rock) along with their new costumes and makeup (designed by David Hartnell and Kevin Berkahn) was received extremely well throughout Auckland. Ragnarok was the first New Zealand band to sell out a concert through ‘pre-bookings’ at Auckland’s Her Majesty’s Theatre. They were also the first New Zealand rock band to incorporate the two drummer concept.
They started touring NZ in early 1975 to promote 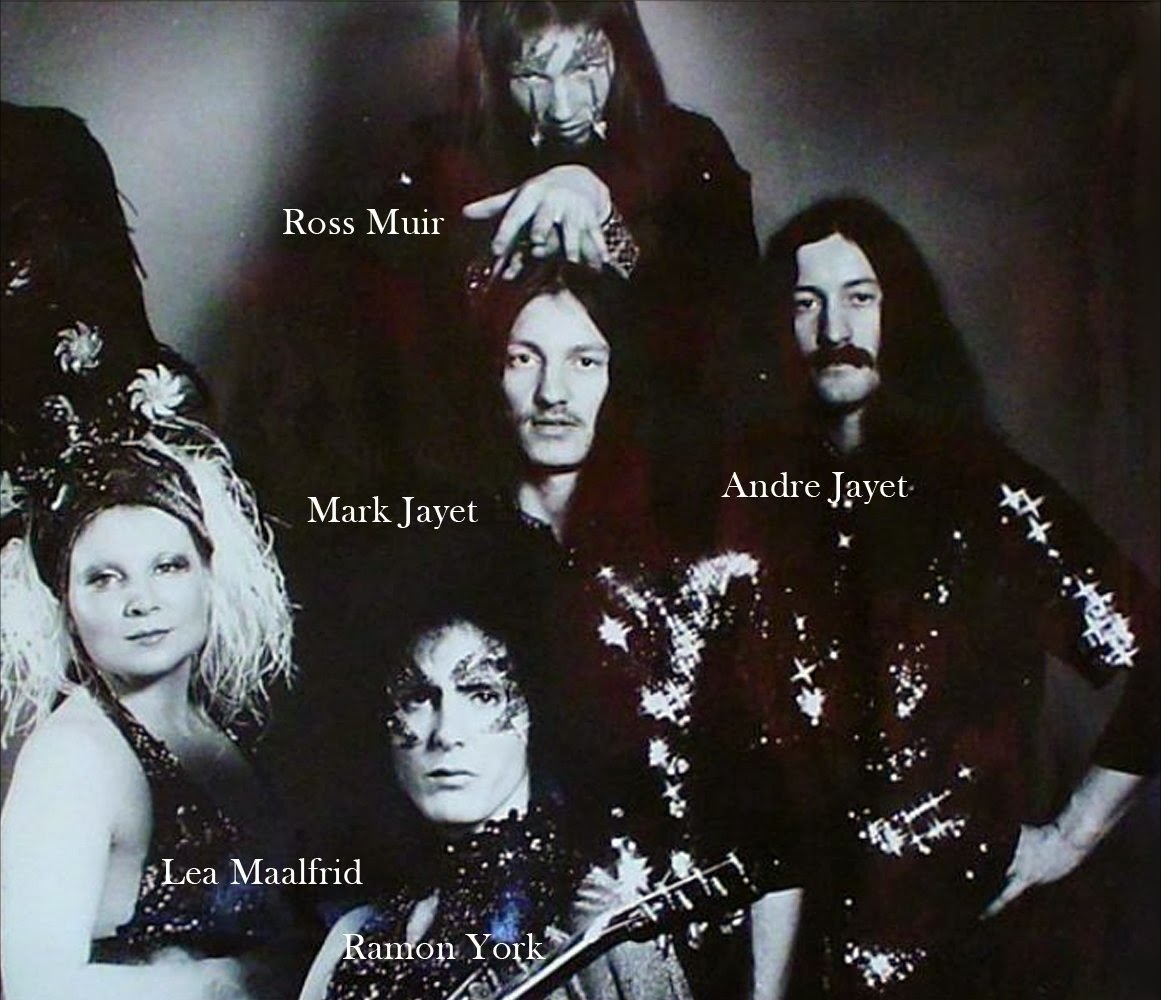 the album and were playing to packed theatres, hotels, taverns, clubs and schools. Lines of people could be seen waiting to enter prompting Ragnarok to perform Saturday afternoons as well. To satisfy demand two full New Zealand tours along with a small North Island tour were completed by November 1975. The touring was extremely tiring (working 6 nights a week) and it was this that prompted Lea to pursue a solo career.
Napier became the band’s second home, basing themselves in Napier, Hawke Bay in late 1975 where they prepared material for the next album. This album ‘Nooks’ was recorded in mid 1976 at EMI Studios in Wellington.
Promotion of this album included a three concert tour (Christchurch, Wellington, Auckland) supporting Jeff Beck with the Jan Hammer Band. Ragnarok also headlined the Otaki Music Festival but were delayed in the South Island because of ‘technical problems’ relating to the Cook Strait Ferry. Two hours late, their progress was being reported over the PA system to eagerly awaiting fans at the concert. Ragnarok had phoned the organisers from phone boxes to ‘report in’ – no mobiles in those days! Although arriving late the performance was well received, the band’s drama having been shared with the audience.

Occasionally Ragnarok would settle down to a residency from 4 to 6 weeks (Christchurch, Napier, Dunedin) so they were able to update their repertoire and concentrate on new originals for their 3rd album. Touring was relentless, giving the band little time to update or to improve on already successful performances. Most of this evolution came from their live performances. Time out to prepare a strategy for the future was not an option.
Eventually the continuous touring took its toll on the band and it was starting to show in their performances. The 3rd album never got to the studio and Ragnarok did their last gig in Havelock North at a local tavern in 1979 for many loyal Hawke Bay fans. It was a far cry from the glory days earlier in the decade. Their 5 year reign had ended where it had started, a small pub in the suburbs. Ragnarok featured on TVNZ’s ‘Radio with Pictures’, ‘Grunt Machine’ and ‘Pop Co’.
.
Review (Nooks) 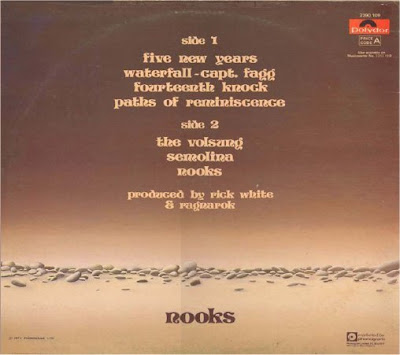 This album is a real symphonic gem from the mid-70s. Ragnarok were New Zealand's premier prog group, and this record stands up with the best. It reminds me a lot of Sebastian Hardie in its lush textures and excellent guitar playing. The vocals are good, but unobtrusive and perhaps a little lacking in excitement, but I'll take on-key over exciting any day. The band had two keyboard players, who are allowed to stretch out on a number of beautiful, pastoral ballads.
The opening song, "Five New Years" , is one of the strongest, and sets the pattern with the mellotron and synthesizer attack and the ponderous lyrics. The melody here and elsewhere is strong, but the atmosphere is the band's real strength, and they really lay it on thick. Next is the stunning "Waterfall/Captain Fagg". The first part begins with the incredibly silly line about the waterfall being at one with the river, yet it sticks. Then more cosmic interventions and a worthy showing on vocals, guitars and bass. We think we know where it's heading, but suddenly the band veers 180 degrees into the boogie of "Capt Fagg". It's even more preposterous than the gestalt waterfall, but it works even better. The impact is all the greater because it is totally unlike anything else on the album.
From here, "Fourteenth Knock" is a workout for drums and bass until the moogs carry the day, again very melodically. To change the pace, "Paths of Reminiscence" is an acoustic affair and the first indication of any sort of a mystical folky affectation. "The Volsung" evokes druids and other mythic woodland life even more, and is another personal favourite, eerie and tuneful.
Some of the synth work is spacey (aka Eloy or Pink Floyd) and between some songs you'll hear a variety of sound effects, including planes crashing into flushing toilets or waves lapping the beach with seagulls wheeling overhead. Overall, a unique symphonic outlook and not too bad.
(Various Reviews at http://www.progarchives.com)
. 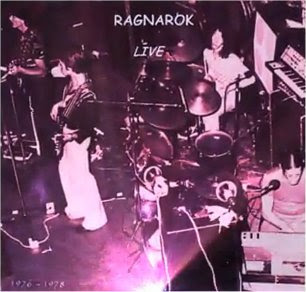 Review (Live On 1ZM Radio, New Zealand)
While Ragnarok's Live was often sold as an official release, it seems highly likely that it's actually a bootleg. It opens with a 'test tone', then a radio announcer giving some spiel about the band, with the audience cheering in the background; he even mentions some of their gear, including the Moog and Mellotron.
Although plenty of radio broadcasts have been released officially, this one seems unlikely; I don't even know for certain that it appeared in '77; I'm just going by the info I've been given. What I can say is that it must've been recorded in '76, as the announcer refers to their 'forthcoming' album, Nooks, which was recorded late that year. The first three tracks are all from their debut, and are slightly stripped-back versions, without the studio gloss, although "Butterfly Sky" features the same phased Mellotron as its studio counterpart. They betray their pub scene roots with a decent version of Rory Gallagher's "I Fall Apart", and their Pink Floyd and Zeppelin medleys, though, making the album well over half covers. Loads of 'Mellotron' throughout, (of course keys man André Jayet would've been largely silent, otherwise), mostly strings, but with choir on "Raga" and flutes on "Rainbow Bridge", with the highlight being on the Pink Floyd Medley. Ever wondered what Dark Side of the Moon would've sounded like had Rick Wright used a Mellotron? You haven't? well wonder no more. Ragnarok play from "Us And Them" to the end of the album, and as the cliché goes, it's absolutely mellotron drenched, mostly strings with a bit of choir, with the odd bit of synthesizer emulating the original.
The final track is a cover of "Whole Lotta Love" made famous by Led Zeppelin of course.My first thoughts when hearing this is who the heck are these guys? It doesn't sound like the same band! The heavy guitar,the loud and rough vocals.Unreal.They even do the experimental sounds section to perfection.This band is amazing and yes they can rock with the best of them if they want to. Check out the freaking guitar solo 7 minutes in! A nice little snap shot of how great this band was in a live setting [review from planetmellotron.com]
. 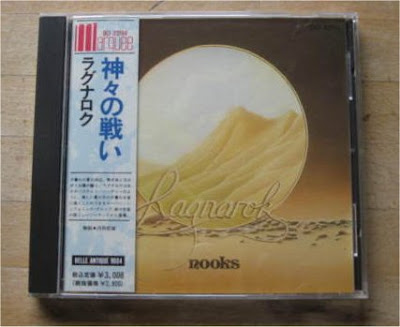 I have decided to make this a double post, as both these recordings were produced at the same time in Ragnarok's short career. These (256kps mp3) rips were sourced some time ago from the WWW (thanks to the original uploaders) and I have been able to track down some information regarding the 'Live' recording thanks to a forum post made by Andre Jayet (Ragnarok's keyboard player)
As a member of Ragnarok (mellotron/moog,etc), the band has never heard of or sanctioned this live album. We are not sure where the material was recorded, but obviously someone managed to secure a copy of our live recordings from somewhere. Other than Radio Concerts and some support gigs, the only other source of this material may have come from the person who purchased our 4 track TEAC tape machine with tapes that may have had these recordings on them. Are remastering both studio albums at the moment as well as some live takes at various concerts thru-out NZ. Hope this info is of help to your website and members . CHEERS Andre Jayet

Full album artwork is supplied for both albums, with thanks to WoodyNet for the Live album covers.
.
'Nooks' Track Listing 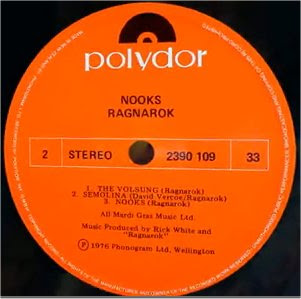