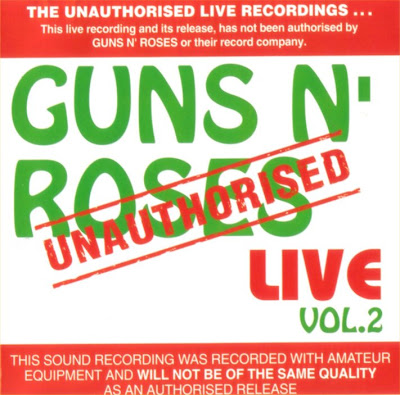 Guns N' Roses (sometimes abbreviated as G N' R or GnR) is an American hard rock band. The band formed in Hollywood, Los Angeles, California in 1985. Led by frontman and co-founder Axl Rose, the band has released six studio albums, three EPs, and one live album while going through numerous line-up changes and controversies since its formation.
Rose is the only consistent member of Guns N' Roses. The band has sold more than 100 million albums worldwide, including shipments of 43.5 million in the United States. The band's 1987 major label debut album,' Appetite for Destruction', has sold in excess of 28 million copies worldwide and reached No. 1 on the US Billboard 200 and is also the highest selling debut album of all time both in the US and worldwide. In addition, the album charted three Top 10 hits on the Billboard Hot 100, including "Sweet Child o' Mine" which reached No.1 [extract from wikipedia] 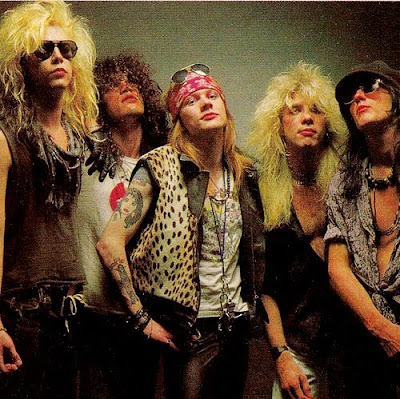 I bought this Guns N' Roses 'Unauthorised Live' recording a while back, when they were really popular in Australia, as few bootlegs existed on CD format at the time and the series is no longer available. In fact, I've found quite a few other titles since at garage sales and flea markets.
This is a classic example of 'don't judge a book by it's cover' - the cover might look pretty average but the recording is very good nonetheless. There are some drop outs, but overall the sound is clear and crowd chants in the background indicate that this is a soundboard recording.
The cover makes no mention of the origin of the recordings (although the Joker pressing was released in 1993), but thanks to the excellent website Guns n' Roses Bootlegs , I have been able to establish that the recordings were made in Pasadena, California in 1987. One hint about its origin is when Axl introduces the band and makes mention of the drummer 'Freddy Coury' filling in for Steven Adler that night, as Adler was unwell. This is clearly documented with the Pasadena concert.
The full concert has been released previously under various names: 'Stoned In Pasadena', ' GnR Unlicensed' and 'Bad Boys, Great Noize'.
This recording was taken from their concert held on Wednesday, Dec 30th (1987) at Perkins Palace, Pasadena, in California (see below)
. 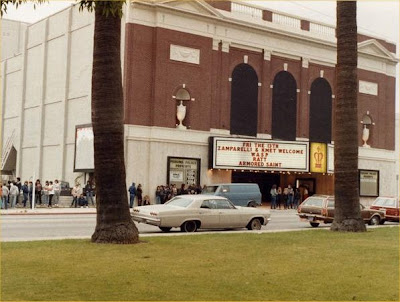 Axl is in full swing during this concert, dropping the F word just about every chance he can get and even introduces the first song in this set as "Welcome to the F*cking Jungle".
Unauthorised Vol 2. is the second half of this concert but unfortunately I have yet to source the Vol 1 CD release.
This post comes from a CD rip taken at 320kps and includes artwork from not only this release, but also the other bootleg releases. I have also managed to source 'Sweet Child Of Mine' from 'Stoned in Pasadena' to give this post a bonus it deserves. Let's face it, a GnR concert without "Sweet Child o' Mine" wouldn't be very sweet at all, now would it? 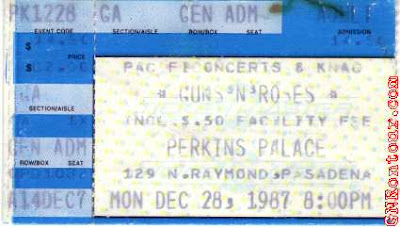 Posted by AussieRock at 8:26 PM