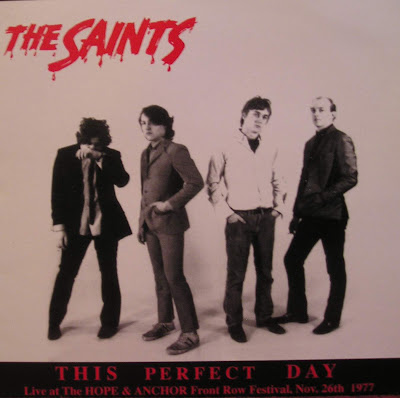 The Saints grew out of the Brisbane garage band Kid Galahad and the Eternals which featured vocalist Chris Bailey, guitarist Ed Kuepper and pianist come drummer Ivor Hay. They formed in 1973 and changed their name to the Saints a year later.
Like so many good things, The Saints began by accident rather than design.
Ed Kuepper, guitarist with Brisbane’s original punk heart-stoppers the Saints, had left school and was working in a Brisbane warehouse for Melbourne-based independent label Astor Records. The label operated from the 1960s through to the early 1980s, experiencing early success with pioneering Australian garage bands the Loved Ones and Masters Apprentices.
Working for Astor was a critical postgraduate education for Kuepper. Not only did he get his hands on slabs of deleted singles, it helped him unlock the mystery of the recording process. The Saints were already tearing up their neighbourhood with hot-shot high-energy rock & roll, but for the guitarist, everything that happened between the band’s sporadic live performances and his record collection was a mystery. [extract from wikipedia] 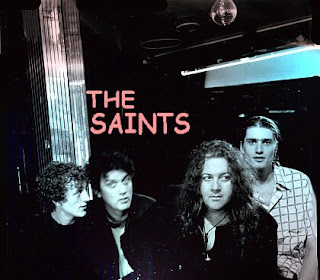 Among other duties at Astor, Kuepper was fortunate to be in charge of handling requests for custom pressings. He began to receive tapes – often from truckies who played a little C&W in their spare time. Independent recording was far from a new thing, in Queensland or elsewhere. But until the penny dropped in Ed’s mind, no Australian band before them had ever thought to do it themselves.
Those three magic words, Do It Yourself, provided the keys to the kingdom.
Really, though, there was no choice. The Saints weren’t necessarily miles ahead of their time in world terms – the Ramones were getting it together in New York, and when Kuepper first heard the band, he was famously disappointed for feeling beaten to the punch. But Brisbane ain’t New York. Even in Sydney, no record company was game to touch the equally reviled Radio Birdman. 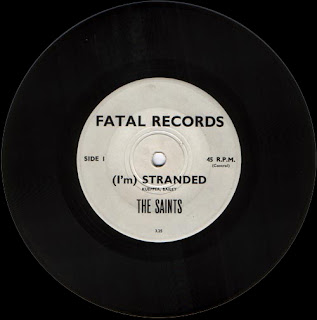 Emboldened, the Saints booked themselves into Bruce Window’s 16 track studio in West End. Two hours later, they emerged with three minutes of history. "(I’m) Stranded" was released on the band’s own Fatal Label, was sent around the world, and by September 1976 – before the Damned, before the Pistols and the Clash – the Saints found themselves a momentary cause celebre, thanks to a stunning review in London’s Sounds magazine. And then got signed by EMI which, for the band, is where it all started to go downhill.
The Saints' debut single '"(I'm) Stranded" (September, 1976) was voted Single Of The Week by British rock music paper Sounds.
In July, 1977 The Saints scored a Top 40 hit in Britain with "This Perfect Day". The band did not make the Top 40 in Australia until April, 1986 with "Just Like Fire Would".
In 1977 The Saints recorded cover versions of Connie Francis' "Lipstick On Your Collar", and Ike And Tina Turner's "River Deep, Mountain High" for the One, Two, Three, Four E.P. (October, 1977). 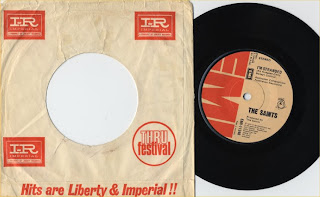 In 1978, the press reported The Saints' derogatory comments about the Australian pop scene, and in particular television music show Countdown. As a result, the group was banned from appearing on Countdown.
The cover of The Saints' album Prehistoric Sounds (October, 1978) featured a still from the classic 1951 B-grade science fiction film When Worlds Collide.
Kuepper, Hay and Ward left the band in 1978 but Chris Bailey continued touring and recording as The Saints with a revolving line-up of musicians throughout the 80’s. After releasing a couple of records under his own name, Bailey reformed The Saints in 1996. Once again without any of the other founding members but they have reunited occasionally to perform live.
The only constant factor in The Saints' tortuous history has been lead singer Chris Bailey, with much speculation over the shakey relationship between Bailey and Kuepper. [extract from Soundslike Brisbane.com] 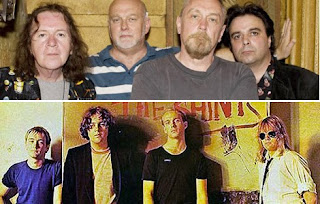 .In January 2009, musical journalist Bruce Elder interviewed Bailey in an attempt to clarify this speculation once and for all....
.
"ED, DO you hate me?" calls out Chris Bailey, singer with the legendary punk band the Saints. From across the room Ed Kuepper, guitarist with the band, replies quietly: "No, Chris, I love you." "He loves me and I love him," says Bailey. Kuepper adds: "The band didn't split up with a lot of personal animosity going on. It was more a case of moving apart musically which is sometimes presented as though that is not a legitimate reason." They are responding to one of the great myths of the Australian music industry. That the Saints, who, apart from one brief reunion about 18 months ago at the Queensland Music Festival, have been kept apart for 30 years only because Bailey and Kuepper hate each other's guts. It has never been true. Bailey recalls a night in late 1978 - "Back when you were going to become our manager, baby" - an offer the band made and I declined when we all sat in a curry house in the north London suburb of Hampstead. It was pretty much the end of the road for the band. Kuepper and Bailey were heading in different directions. EMI was showing a distinct lack of interest and their manager had returned to Australia. The future looked bleak. Out of that moment evolved Kuepper's remarkable career both as a solo artist 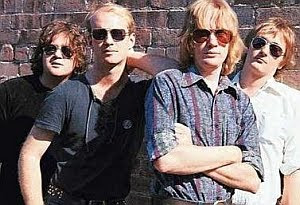 and leading such prodigiously talented "jazz punk" outfits as the Laughing Clowns. Bailey, who lives in Europe, has forged a double career as a self-styled solo "troubadour" and touring with a new manifestation of the Saints. Of the other members, the stories verge on the bizarre. Ivor Hay sells cardboard coffins and is the managing director of OnEarth, a company which promotes itself as "Australia's Only Alternative Funeral Casket Manufacturer". Bailey says: "It's not like you can tell he hasn't played for a while. He is absolutely astonishing. Ivor has always had great flamboyance and that hasn't deserted him." Bailey is less forthcoming about Arch Larizza saying enigmatically: "Archie's gorgeous. He's been playing non-stop. He's a virtuoso. Seriously, he really is. I had forgotten how well he played. Also a few years ago he turned me on to the ukulele." The reunion is a surprise to Bailey who admits that when first approached he thought it was "a wanky stupid idea [but] it has turned out to be a lot fresher and it's actually quite exciting. The personality blend of Ed, Ivor, Archie and myself is cool. Cutting aside all the bullshit. They actually can play. We're actually a half-decent rock'n'roll band. I don't think we're blemishing our copybook." So, why get back together after so many years? Bailey is wonderfully blunt: "Money."
.
This rip was taken from vinyl at 192kps and includes limited artwork (thanks to Bruce at madplace blogspot) The concert was recorded at a punk festival at The Hope and Anchor in November 1977, during their first tour of the United Kingdom. The audience, wanting their punk bands to look like a punk band, never really took to the Saints and the response on this record is lukewarm at best but the music is pure brilliance.
.
Track Listing 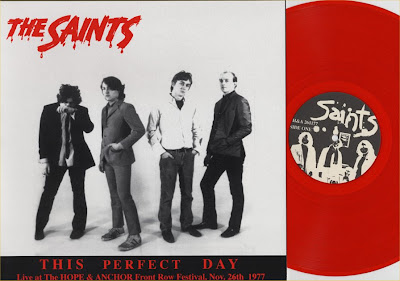