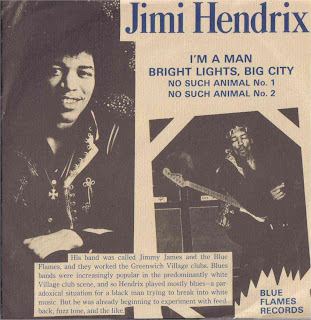 Jimmy James and the Blue Flames was an American rock band that formed in New York City in 1966. Comprising guitarists Jimi Hendrix and Randy California, bassist Randy Texas (occasionally replaced by Jeff Baxter) and drummer Danny Palmer, the band was together for three months before Hendrix left the country to form The Jimi Hendrix Experience in September.
Hendrix, under the name Jimmy James, formed The Blue Flames (originally as The Rainflowers) in June 1966. In doing so, he recruited 15-year-old guitarist Randy Wolfe after seeing him playing in Manny's Music Store on 48th Street. Hendrix was excited when he heard Wolfe playing, and so invited him to play with him at the Cafe Wha? that night. At the Cafe, the guitarists spent fifteen minutes in the boiler room, where Jimi taught Wolfe a few songs, namely "Hey Joe", "Like a Rolling Stone", "Wild Thing" and "Shotgun".
.
The Blue Flames' bass player was someone called Randy, who was from Texas. As the second Randy in the band, Jimmy dubbed him Randy Texas, and Wolfe adopted the name Randy California, which he held until his death. The drummer was one of Texas' friends, known as Danny Palmer. [For more details - see Interview with Randy California]
Jeff Baxter (of Steely Dan and The Doobie Brothers fame) was also known to play bass for The Blue Flames on a few occasions.
The band ended up playing six nights a week at the Cafe Wha?, earning a secure spot on the bill. California recalls that "the band made about $60 a night and Jimmy split it equally four ways", though Carol Shiroky (Jimi's girlfriend at the time) thinks differently, claiming the band used to get paid only $7 per night. The band split as Jimi was approached by Chas Chandler, who eventually formed The Jimi Hendrix Experience in England. Jimi apparently tried to bring California to England with him to form The Experience, but Chandler was against the idea as he believed Hendrix could be the only guitarist in the band, and California was too young anyway.
The rip was taken from Vinyl (Blue Flames Records) at 160kps and includes the EP cover.
.
Track Listing
01 - Bright Lights Big City
02 - I'm A Man
03 - No Such Animal Part 1
04 - No Such Animal Part 2
.
Band members
Jimmy James (aka Jimi Hendrix) – guitar
Randy California – guitar
Randy Texas – bass
Danny Palmer – drums
Jeff Baxter – bass (part-time)
.
Jimmy James And The Blue Flames Link (16Mb) REPOST
.
Posted by AussieRock at 12:37 AM