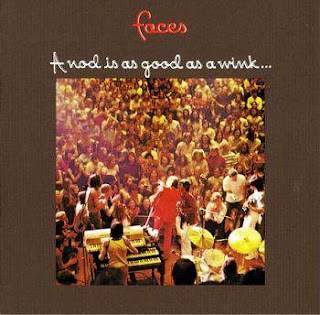 When Rod Stewart hooked-up with the remnants of The Small Faces in 1969 by hanging round their rehearsal rooms with similarly unemployed pal Ron Wood, he was not universally welcomed. Having been ditched by Steve Marriott, en route to super-group Humble Pie, the three remaining Small Faces were not keen to be anyone else's backing band. Yet overwhelming musical compatibility kept such worries in the background until 1971, when the band's excellent third album coincided with Rod's solo 'Every Picture Tells A Story'.
There has always been a subtle shade of difference between Rod Stewart albums and The Faces albums. Somehow on the latter, Rod has shared more of the spotlight with his cronies. This is definitely the case on Nod... In fact, Stewart only sings lead on two- 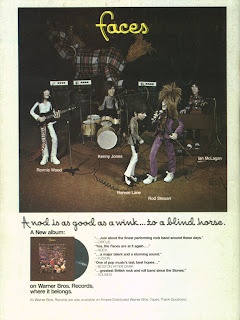 thirds of the tracks, letting Ronnie Lane step up to the vocal mike for the reminder. And a funny thing happens. Lane nearly pretty much steals the show. His voice is smooth and clear. He knows how to hold a note and draw the humor from a lyric, something he does quite handily on a little refrain entitled "You're So Rude." This is the age-old tale of a young man trapped flagrante delicto, and Ronnie works it for all it's got.
This is still very much Rod's show - it seems as if he must dominate the proceedings whether he wants to or not. Could be his scratchy set of pipes. Could be his effervescent personality. Maybe it's his breath. It doesn't matter. By now everyone's become accustomed to Stewart's extraordinarily appealing style, and from the opening track, "Miss Judy's Farm," on which he takes the love-crazy hero of "Maggie May" farther out into the pastures of raunch, to the closing number, the appropriately titled "That's All You Need," he is neatly in command. . 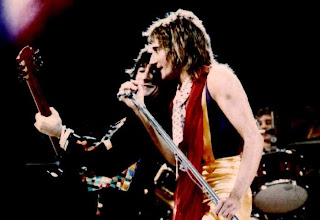 The material on the record is pretty evenly divided as far as songwriting credits are concerned. "Stay With Me," penned by Rod Wood and Stewart is a cockeyed masterpiece which Rod treats in a properly raucous and rowdy fashion. A nod (and a wink as well) go to Chuck Berry via a smartly moving version of "Memphis." An album of high level hi-jinks which should appeal to even the blindest of horses.
Sadly for the Faces, the follow-up, Ooh-La-La, is best forgotten, and their star waned as Stewart's rose toward the commercial apogee of Atlantic Crossing and stadium anthem "Sailing." The rest is history....


This Rip is taken from CD at 320kps and includes full album artwork. I have also included a bonus double live track "That's All You Need-HonkyTonk Woman" which was recorded by John Peel for the BBC in 1971).
.