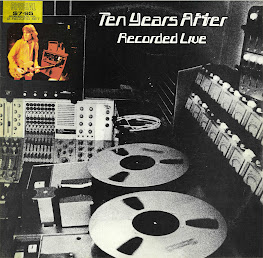 Recorded Live is the third live album by British blues rock musicians Ten Years After, which was released as a double LP in 1973.

This album, containing no overdubs or additives, was recorded over four nights from January 26-29, 1973, in Amsterdam, Rotterdam, Frankfurt and Paris with the Rolling Stones' mobile recording truck and later mixed from sixteen tracks to stereo at Olympic Studios in London. It was meant to be an "official bootleg" (such a term appears on the cover) and therefore no studio overtime or other corrections were made here, and the tracklist reflects the group's performances from January 1973, during the tour promoting the album "Rock & Roll Music to the World ".

The album made #39 USA & #36 UK on the charts, and features some of their best numbers. Standout track is the extended extemporisation on "I Can't Keep From Cryin' Sometimes" which sees Alvin detuning the guitar and retuning it mid-song. 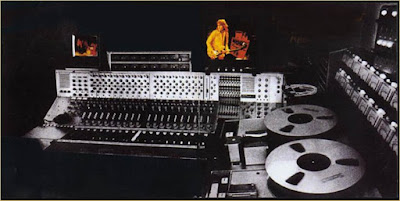 The cover of Ten Years After’s 1973 album Recorded Live (see above) depicts a giant reel-to-reel recorder, which certainly captures the era when this double-LP set was recorded. Approaching the end of their run — only one more album would come, 1974’s Positive Vibrations — Ten Years After were deep into the thick of ’70s arena rock, so everything they played on-stage wound up stretching well beyond the five-minute mark, sometimes reaching upward of 11 minutes. Everything on this double-LP places improvisation over groove — a sentiment that is accentuated on the 2013 expansion, which winds up running 21 tracks over two discs, adding bonus outtakes to the original double-LP set. The best parts here are the improvisations, particularly Alvin Lee’s long, languid guitar solos, but this album — either in its original incarnation or in its expansion — is a distinctly ’70s creation: it’s unhurried and indulgent, reveling in its slow, steady march to a virtuosic, never-ending guitar solo. 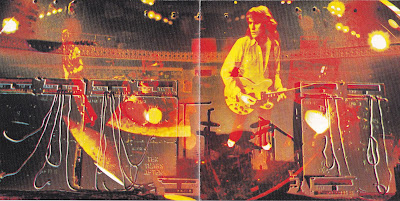 Once Ten Years After’s performance in the Woodstock film cemented their command of the concert stage, it was only a matter of time before Chrysalis would want a full live album from the band. Undead from 1968 doesn’t do them justice; five years later with over a half-dozen studio albums under their belt to choose from, 1973’s double Recorded Live set is really the definitive document of Ten Years After at their absolute best. 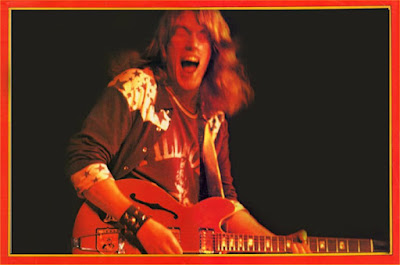 Album Review 1
They kick off with ‘One Of These Days’ (wow! but somebody cut down that ending jam, please!), only to continue with the unforgettable riff of ‘You Give Me Loving’: what a wise choice from their worst studio record so far, and I don’t even mind that Alvin messes up the lyrics because they were so convoluted in the first place. 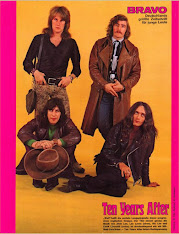 Later on, the band, as usual, breaks in some of the oldies, like ‘Help Me’ and ‘Good Morning Little Schoolgirl’. On the way, Alvin displays some cute little tricks, like showing his prowess at classical guitar (‘Classical Thing’), resurrecting the ‘Skoobly-oobly-dooboob’ ditty (‘Scat Thing’) and just playing the fool (‘Silly Thing’). The two highlights of the show are, of course, a terrific fifteen-minute version of ‘I Can’t Keep From Crying’, which is again transformed into tons of different things on the way, including even a few lines from ‘Cat’s Squirrel’ and even ‘Sunshine Of Your Love’ – sic!, and ‘I’m Going Home’. The former also was the central point for showing Alvin as a ‘guitar experimentator’ – in particular, he liked to tune his guitar and play it at the same time, which sometimes resulted in a truly awful, ear-destructive sound which I kinda like nevertheless. 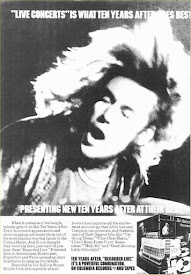 And the latter (‘I’m Goin’ Home’, that is) is predictably close to the Woodstock version, except that the various sections are interspersed in a different way and the drums are much more prominent. And damn the stupid audience that mars the opening chords with its silly applause! Otherwise, though, it’s simply a superb version: with all the ‘boo-boo-babys’ in place, and the old rockabilly classics medley in the middle. It does seem a bit worn off as compared to the Woodstock version, but you can excuse the guys: after all, the piece was like a stone around their neck, and it’s a wonder they were still able to do it with enough authenticity and patience.
For me, the only letdown on the album is the eight minute version of the Hobbit which features a rather long and dull drum solo by Mr Lee and I quite often find myself skipping the track when listening to this album. This live record, on the other hand, is instantly amiable and friendly – and it features lots of guitar jams, too. But these kids are so frantic, so full of energy and they love the stuff they’re playing so much you’ll be sure to be caught in the fun. This is no Yessongs, either – just your basic love for dat electro guitar sound. And no ‘supergroup’ hype, either – they just play and they don’t give a damn. I like it when a record doesn’t have balls. [extract from classicrockreview.wordpress.com] 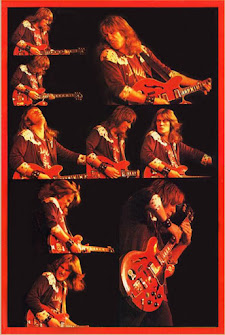 Album Review 2
(New Musical Express, July 21, 1973)
Considering the number of bands that have split recently, it's a wonder that Ten Years After are still around. Because listening to this, their first live album since their 1968 'Undead' album, it becomes clear that Ten Year After have progressed very little since the early days when the blues could be heard in just about every club in Britain. Back then, Ten Years After were one of the finest and even though a bit of flash, blues bands around. If you don't believe me, get a copy of 'Undead' and you'll doubt no more. There was fire and conviction in their playing, and they were a lot tighter, never allowing the self-indulgence which becomes evident on the sixteen minute plus version of "I Can't Keep From Crying Sometimes" included here.
Alvin Lee's guitar does all its tricks, and say what you like, Lee is a good guitarist, but it does get alittle long.. Unlike Cream, Ten Years After aren't that much of an improvising band.
Alvin and bassist Leo Lyons are really the only improvisers. In the past much has been written about Lyon's bass-playing, which just about keeps pace with Alvin. It's been said before, but Lyon's is one hell-of-a-dextrous bass player. 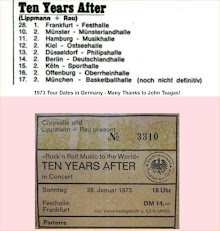 Naturally enough, "I'm Going Home", (ain't it about time he got there?) finds its way onto this album and it's not one of Lee's best version. This album album was recoded in Paris, Frankfurt and Amsterdam, and Chrysalis are pushing it as 'The Official Tens Years After Bootleg' and at a cost of just three pounds, it's good value if you want a record of what was one of our finest blues bands.
Right now, Ten Years After are in extreme danger of becoming stagnant. Even Alvin Lee has said he's felt that way. (Article by Steve Clarke)
This post consists of FLACs ripped from my near 50 year old vinyl and includes album artwork for both vinyl and CD formats. Note that early CD versions did not include the full concert, and were missing The Hobbit and the incidental short tracks (Scat Thing, Classical Thing and Silly Thing) which are all present here.
This live album was my first introduction to Ten Years After and being a highly impressionable 15 year old at the time, it simply blew me away.....I can't tell you how many times I've played Side 1 and Side 3. Their blistering version of "Good Morning Little School Girl" and the epic "I Can't Keep From Cryin' Sometimes" were definitely favourites.  Of course, I proceeded to hunt down all of their albums over time and am now very proud of my TYA collection.   Thought I'd share this one with you in the hope that I can pass on the excitement that I felt when I first heard this album. Note the special price I got this gem for (see cover), at the time $7.95 represented about 25% off the normal price of a double album - bonus!  All photos and Review 2 above were sourced from Alvin Lee's Website with thanks 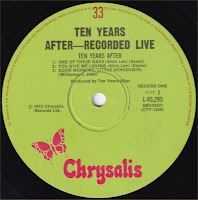 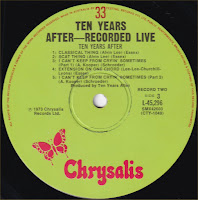