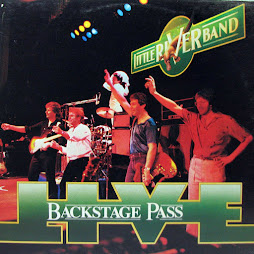 Little River Band (LRB) is an Australian rock band, formed in Melbourne in early 1975.
The band chose its name after passing a road sign leading to the Victorian township of Little River, near Geelong, on the way to a performance. Little River Band enjoyed sustained commercial success not only in Australia, but also in the United States. They have sold more than 25 million records and achieved 13 U.S. Top 40 hits, besides many music awards gained in Australia.

The band's original members were: lead vocals Glenn Shorrock, acoustic guitar and vocals Graham Goble, rhythm guitar and vocals Beeb Birtles, lead guitar Ric Formosa, bass guitar Roger McLachlan, and drums Derek Pellicci. Goble was the only original member born in Australia. The music and lyrics for most of the group's compositions were primarily written by Goble and Shorrock, with contributions from Birtles, Briggs and Pellicci. 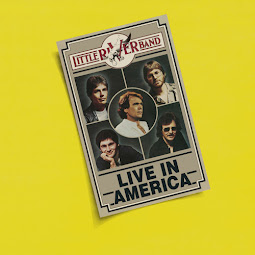 Just before LRB began touring abroad in the 70's, lead guitarist Ric Formosa, apparently not enthusiastic about touring outside of Australia, left the group in August 1976 to pursue other musical interests and was replaced by David Briggs. At the same time, the group decided to replace bassist Roger McLachlan, who left to join Stars and was replaced by George McArdle. However, Formosa remained in touch with his former bandmates and conducted and wrote string parts for several songs after he officially left the band. 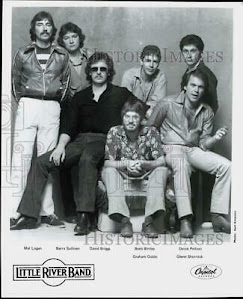 From 1976 through 1985, the group maintained a constant touring schedule which kept it in the U.S. for long periods of time and may have contributed to much of the constant shuffling of personnel. For example: The band's schedule was so busy that when drummer Derek Pellicci was severely injured in a gas grill fire in May 1978, the band brought in a substitute drummer (Geoff Cox) rather than cancel shows. Drummer Cox remained with the group through the summer of 1978 and even played alongside Pellicci after he came back until he was healed enough to continue on his own. A keyboardist, Mal Logan, was added in time for another U.S. tour in late 1978.
After finishing a U.S. tour in January 1979, bassist McArdle left after one final appearance with the band at the Nambassa Music & Alternatives Festival in New Zealand on 29 January 1979. He went on to take up Bible study, eventually pursuing a path as a minister. Barry Sullivan took over on bass until American Wayne Nelson, currently the group's lead singer, joined in April 1980. [extract from radioswisspop.ch] 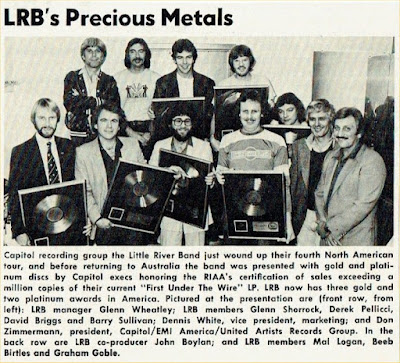 Live Backstage Pass - Album Review
(Juke Magazine 30th Nov, 1979)
If you're looking for sheer professionalism, superb stereo fidelity, as close to perfect harmonies and world-class performance on a live album, then this one is quite simply the best sound on a live album yet to be recorded in Australia. That doesn't mean the most exciting by any means. There is no rawness, exuberant energy or gutlevel feel (definitely low level sweating going on here), just slick, smooth showmanship.
No problem reproducing the studio sound (with a little help from Adelaide's Symphony Orchestra) on stage for LRB. In fact, apart from the applause that greets the opening bars of "It's A Long Way There" through the clapping responses to "Reminiscing" and "Help Is On Its Way", you wouldn't know the album was recorded live at all. 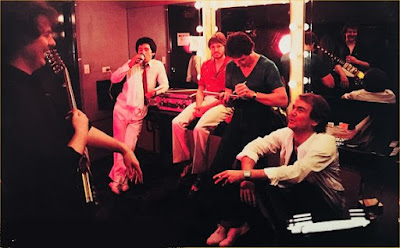 This says a lot for the combined talents of LRB, but it makes one wonder why they bother releasing a live LP all. There are no rearrangements, expansions of ideas in 'live' exceptional moments - though there are subtle changes in the orchestration and accents in the rhythm section (tight and tasteful). The orchestra - conducted by David Measham, who has worked with Rick Wakeman among others - is always understated, they're more for gloss apart from the grandiose intros to some of the big numbers. True to their current 'philosophy', most of the time LRB come across as a band rather than a production.

Shorrock's and Birtles' vocal work comes across superbly and McArdle's (absent from the cover) bass solo on "Light Of Day" is worth having. Briggs' guitar, of course, is technically proficient and masterful throughout, but it all tends to become monotonous, in style as well as tone, which makes the album sound a bit thin and toppy, compared to the studio cuts.
Four of the eight tracks are taken from the 'Sleeper Catcher' LP, which the Home Run tour, from which these live tracks were taken, was set up to promote, with three songs from the first LP and "Help Is On Its Way" from 'Diamantina Cocktail', all perfectly reproduced here.
On the positive side, the album showcases a truly world-class Australian band outclassing a lot of the OS competition. It will sell by the truckload and might recoup some of the loss they incurred in putting on such an ambitious and lavish tour here last year. (Review by Michael Smith)
LRB Home Soon From America
(Juke Magazine, 12th July, 1980)
The Little River Band will return to Australia on July 25 following its successful tour of America in support of the double, live album Backstage Pass which has so far sold 350,000 copies.
The band arrived in the USA on June 7 and undertook a heavy schedule of concerts in Detroit, St Louis, Witchita, Oklahoma and Tulsa, supporting Pure Praire League.
The band also played support to Foreigner and Checker Dome in St Louis and to Player at the Universal Amphitheatre in Los Angeles for three nights. Their last concert was on Sunday at the 13000 seater Memorial Colosseum in Portland. 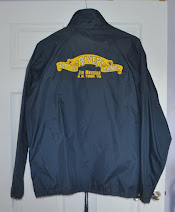 Little River Band arrives in Japan this week for five shows between July 15 and 22.
Prior to arriving in the States, the band spent two weeks touring Europe and in Munich they played before 40,000 people as support to Fleetwood Mac.
The trip was followed by a show at the Rainbow Theatre in London, the same venue they performed at on an earlier visit and failed to impress either the press or public. The scene was somewhat different this time around. The latest issue of the English rock magazine Lam carries this review "LRB are taking London by storm. 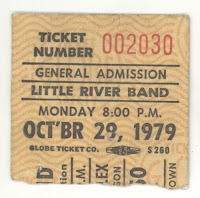 A record walk-up crowd witnessed pure, unadulterated Little River Band. Gone were any of the show gimmicks one normally expects from pop concerts. Instead it was the smooth professionalism of the group and the overall quality of the sound that carried the night".
LRB's latest single in America, "It's Not A Wonder" went into the high 40's in the trade charts before dropping out. No single is expected to be released there for some time.
In Australia, the single "Red Shoes" from the live album has been slow to move.
Once home, the band will rehearse material for their next studio album and a national tour will be arranged (by Graham Simpson). 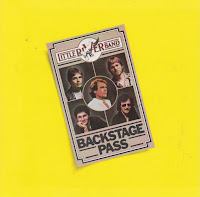 The two rips below were taken from my vinyl in FLAC format and the post also includes artwork for both vinyl and CD releases. I have also taken the liberty of including the CD artwork for the US release of Backstage Pass which includes both of these live albums as a double CD compilation (see left).
I have always thought that LRB have been one of the best bands to come out of Australia, but only up until the late 90's when Pellicci (the last member of the original band) left the band. All iterations of the band since have been imposters in my opinion and the opinion of many other Australians. So, enjoy this post from the 'real LRB' and don't accept anything less. Link below contains both LP's plus all artwork
LIVE Backstage Pass (1979) 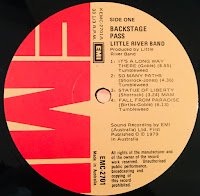 Recorded at a concert given by the Australian Broadcasting Commission in The Adelaide Festival Theatre, 1978. (Concert dates were 7th, 8th, 9th November, 1978)
Track List
01 It's A Long Way There
02 So Many Paths
03 Statue Of Liberty
04 Fall From Paradise
05 Light Of Day
06 Reminiscing
07 Man In Black
08 Help Is On Its Way 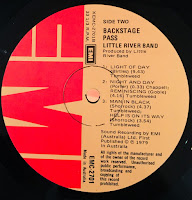 
Live In America (1980)
Recorded In The USA And Canada during their American Tour in 1979. Tracks taken from their October and November concerts
Track List 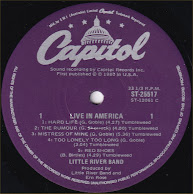 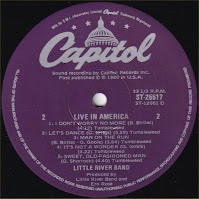