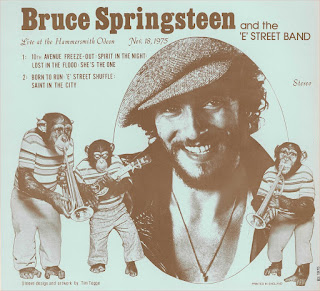 In 1975, Bruce Springsteen became one of the decade’s great success stories, but he remained plagued by self-doubt. While that year’s Born to Run is often perceived as his masterwork—the aural equivalent of the “rock and roll future” ad copy that’d been plastered above his face to boost sales of his previous two LPs—Springsteen was convinced upon completion that he’d produced a failure. The solution, he thought, was to shelve Born to Run and release a live album instead. His perfectionist tendencies in the studio and the high-pressure stakes of making a hit record amplified Bruce’s worst fear: that he, an artist steadily building his name on supposed authenticity, was in danger of being reduced to a product. But on stage, he was in control. From an early point in his career, Springsteen knew that nobody (no label, no management, no pull quote) could sell his music like he could. 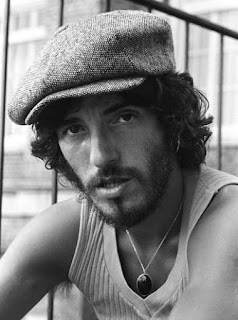 Ironically, it would be decades before the first full-length Springsteen show was released as an album. That show would be his November 1975 performance at London’s Hammersmith Odeon theater—issued as a film accompaniment to 2005’s Born to Run reissue, a stand-alone 2CD set in 2006, and a vinyl box for  Record Store Day. Among the most celebrated nights in Springsteen’s career, Hammersmith Odeon, London ’75 captures the potent combination of determination, ambition, and vulnerability that makes Bruce’s early years so fascinating. Taking place three months after the release of Born to Run and several weeks after he graced the cover of both Time and Newsweek, this show would be his first outside the U.S. Same goes for the E Street Band, now solidified into a sturdy six-man rock group, after stints from jazz musicians and a violinist. “Finally,” proclaimed posters splattered around the city (which Springsteen allegedly tore down in a fit of nervous rage before the show), “London is ready for Bruce Springsteen and the E Street Band.”

While many of Springsteen’s 24 recorded songs at this point were precisely about breaking out of your hometown, proving yourself to the world, and never looking back, his Hammersmith performance feels gloriously unrehearsed. At the 3,500-seat venue, Springsteen effectively separated himself from the crowd—turning his back to them, pulling his thick wool cap over his eyes, and literally crawling into a hole during the breakdown in “Spirit in the Night.” When he tries to make conversation, his storied ability of connecting to an audience is not on display: “So, how’s things going over here in England and stuff, eh? Alright?” he asks, before doubling over in laughter: “I never been here before.”

His unrefined energy carries the show. It took Springsteen six months to record “Born to Run,” but it takes him just four minutes to blast through it, a mere six songs into the set. The band proceeds with a shaky, sloppy spirit, landing miles away from the arena workhorse the song would evolve into. More practiced tunes like “4th of July, Asbury Park (Sandy)” and “It’s Hard to Be a Saint in the City” are amplified and energized. When the songs reach their climaxes, Springsteen backs off the mic and lets his band overpower him, with massive waves of catharsis from Stevie Van Zandt’s lead guitar and Clarence Clemons’ saxophone.

As a composer and bandleader, Springsteen began refitting his catalog to carry the load of increased expectations. “The E Street Shuffle” is slowed down to lament the innocence of bygone days, while a verse about a dead-end relationship with a waitress in “Sandy” is replaced with him whispering how “the angels have lost their desire for us.” From Roy Bittan’s austere piano introduction in “Thunder Road” to a proggy extension of “Kitty’s Back” that spans an entire side of vinyl, Springsteen’s catalogue feels big and dynamic enough to take on the world. As the show goes on, you can almost hear Springsteen realizing it. 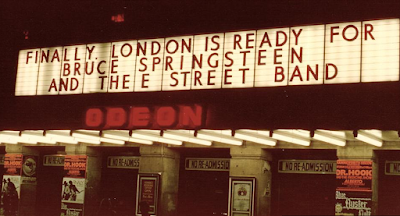 While Bruce and his band were ready for London, the feeling wasn’t entirely mutual yet. A Creem review of the show read disappointingly, with Simon Frith describing the E Street Band as being “pretty crummy in its technical range and subtlety.” He even took issue with Springsteen’s physical presence: “I mean, he’s so bloody small!,” he seethed, “This is the future of rock’n’roll??” Writing for Sounds, Vivien Goldman was sympathetic but skeptical: “There was an immense feeling of strain about this show, following a press and publicity campaign of unparalleled intensity.” An NME writer, meanwhile, concluded his review assuredly: “Bob Dylan can relax.” The audience seemed similarly impassive, occasionally roaring with excitement (especially for the roots-rock covers in “Detroit Medley”), but more often clapping in awkward patches, filling the silence with heckles like, “Oi, turn the guitars up!” 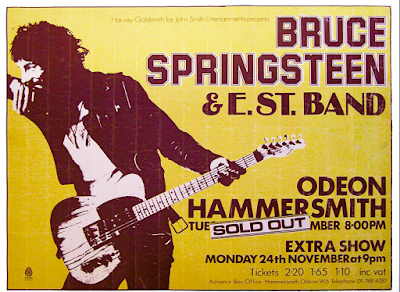 Springsteen took it all to heart. After all, this is an artist who selected his rock critic manager after reading his mixed review of The Wild, The Innocent, and the E Street Shuffle, calling out its poor production. Once Springsteen returned to the states, his setlists started including a cover of the Animals’ “It’s My Life,” a gnarly enactment of an artist taking control over his narrative. Bruce would evolve accordingly, turning the guitars up and sonically tearing down his label’s press posters with 1978’s righteous, unadorned Darkness on the Edge of Town. But for his desperate stand at the Hammersmith Odeon, Springsteen stood as far from home as he’d ever been, and—backed by a band swiftly ascending to the height of their powers—defined what he’d do for the rest of his career. For those two hours, his myth and his music were inseparable. [extract from pitchfork.com/reviews]
.
This post consists of MP3's (320kps) ripped from my classic Ruthless Thymes bootleg, a single album release featuring 7 of the 16 tracks played at the Hammersmith Odeon concert on November 18th, 1975.  Because there is no song separation (typical of these 'Swingin' Pig' type bootlegs), I have chosen to provide the rips as two files (Side1 and Side2) to retain the continuity of the concert.  Although the sound quality is OK it starts off a bit shaky, probably because the recorder was still getting their sound levels right. And so, this is definitely an audience recording and not soundboard quality. Front cover artwork along with some select concert photos are included.
. 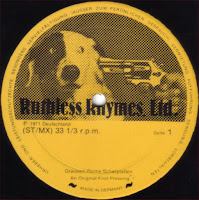 Tracklist
A1 10th Avenue Freeze-Out
A2 Spirit In The Night
A3 Lost In The Flood
A4 She's The One
B1 Born To Run
B2 E Street Shuffle
B3 Saint In The City
.
The E Street Band:
Bruce Springsteen - Guitar, Vocals
Roy Bittan - Piano, Vocals
Clarence Clemons - Saxophone, Percussion
Danny Federich - Keyboards
Garry Tallent - Bass Guitar