The band originated as a trio (Ted, Les and Herman) in September, 1972. Of course Ted had started as a soloist and apparently his role of bass player came about one night quite by accident when his backing group's original bass guitarist stormed off the stage. He simply picked up the instrument and took over. Ted began practising and became the group's permanent bass player. Herm and Les had both previously worked with Velvet Underground (Australian group).

Although the band was originally formed as a backing group (due to the inconsistency of bands providing Ted's accompaniment at his solo gigs), they quickly built up a following as a complete unit.

In December, 1973 the boys set off on a two month trip around the US and Canada. Back in Australia they completed their first album, Here We Are (which they had started just prior to going overseas), and it was issued in November '74. Just prior to its release they added Gary to the line-up in an attempt to increase their versatility.
In March, 1975 they released their first single, 'Sunday Evenings', which did nothing, basically because of lack of airplay. Then, midway through the year, radio personality Barry Chapman (from 2SM in Sydney) suggested that a track from the Here We Are album, 'Jump In My Car', should be released as a single. Eventually the record company agreed and the result was a number one hit and total sales of over 80,000 copies.

The success of 'Jump In My Car' stimulated new interest in the album and by May '76 it had gone gold. Early in the piece though one track on the LP, 'Dina', had caused some problems. It was a popular song on stage and one verse included a four letter word which had to be blanked out on the album.
The band's next single, 'Darktown Strutter's Ball' / 'She's For Me', made the top five in charts all around Australia and at the end of May, 1976 they released their second album entitled Struttin'. A track from it called 'Crazy' was lifted from the LP and it became their third hit.
To promote the album's release the group set off on their first national tour ('Struttin' Across Australia') and in the meantime a contract for world-wide release of their records was signed with Phonogram. Then in June they teamed up with Sherbet for their 80 day Australian tour.

Ted and the boys wasted no time in coming up with their third album Steppin' Out, which was the first record by the band to carry their new abbreviated name of TMG. It was released in October '76 and displayed a greater emphasis on melody and harmony than their first two albums. It sold rapidly, going double gold after only two weeks in the shops. Coinciding with its release the band set off on yet another tour around Australia. 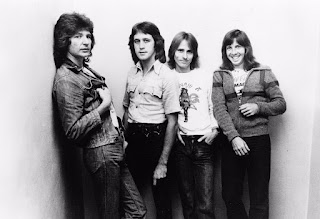 The title track from the album was released as a single and it charted in November "76. Then in January '77 a further song, 'Jamaica Rum', was lifted from the LP and it became the band's fifth hit single.

Over the next couple of months the rock papers began printing a series of rumours and denials regarding the band's possible split with EMI  Records. In April '77, the speculation ended when it was announced that they had moved to the Mushroom label, and officially changed their name to TMG.  Their first release for Mushroom was The TMG Album in June, along With a single from it entitled 'My Little Girl'. The album was still basically extroverted rock, but it did manage to capture the onstage excitement for which they were noted. Then in September they released what should have been a double-sided hit, 'Naturally'/'Sha La La La Lee'. However, it sold only moderately. 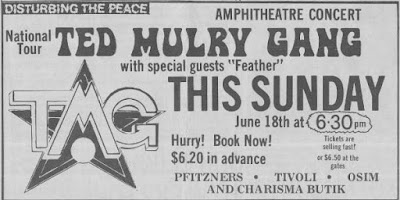 At the end of 1977, EMI released an album entitled Ted Mulry/ TMG's Greatest Hits (one side featuring Ted's solo hits and the other featuring the band's). Plans for 1978 included the recording of a' new LP in January and their first ever tour of New Zealand (spanning two months) starting mid-way through February. [extract from Australian Encyclopedia of Rock, Outback Press, Noel McGrath 1978. p211-212] 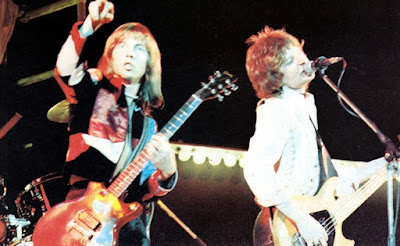 TMG
In April, 1978 the band set off on a three-month tour (supported by Feather) and the groups's steady climb to the upper echelons of the Australian rock scene finally paid off in November when they signed an American release deal with Atlantic Records. Their first issue in the US was a single featuring 'Heart Of Stone' and 'Disturbing The Peace'. A compilation album was to follow in March. 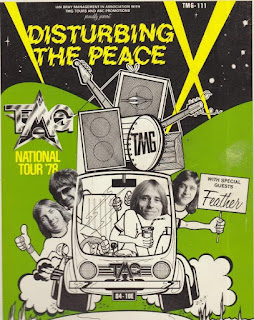 In Australia, the band released a single titled 'Lazy Eyes' on Mushroom (March '78). It was followed on June 5th by Disturbing The Peace album produced by Richard Lush and recorded between January and April. A single, 'Heart Of Stone'/'I Miss You' was lifted from the album and released in July, followed in November by a completely new single, '(You've Got The) Devil In You'.

To promote their recordings, TMG embarked on probably the most extensive tour ever undertaken by an Aussie band, covering all states and many remote towns, including Darwin, Alice Springs, Tennant Creek, Mt Isa and Cairns. Although record sales were not as significant in Australia in 1978 as in previous years, the band did manage to gain airplay in New Zealand, South Africa, Canada, New Guinea and throughout South-East Asia.[extract from Australian Encyclopedia of Rock 1978-79 Yearbook, Outback Press, Noel McGrath 1979. p46-47] 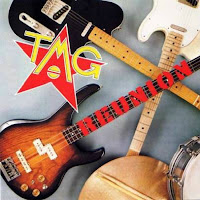 This post consists of 2 rips taken from vinyl, both in MP3 (320kps) format and features the Australian and US releases for their Disturbing The Peace album. Full album artwork and label scans are included for each release, the Australian release on Mushroom records and US release on ATCO records. The track listings between releases are different, with their hit single "(You've Got The) Devil In You" and "Too Bad" only appearing on the US release, while "Girl On The Stage" and "One Night" only appear on the Australian release.
This post was made in response to a request made by blog follower - Micko, and to make the differences between these two releases more publicly known.
.
Track Listings 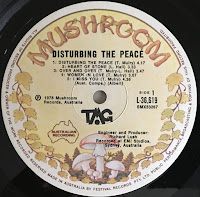 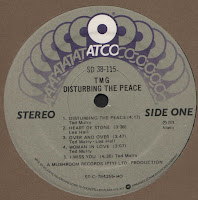 Posted by AussieRock at 9:46 AM