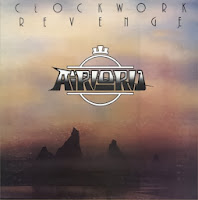 Airlord are one of the more original late 70s progressive bands. From the unlikely country of New Zealand, Airlord emerged with a pretty crazy bent on classic era Genesis. The vocals are most reminiscent of Gabriel, whereas the guitars play in a more hard rock style, with an occasional blazing solo. The keys (organ, synthesizer, Mellotron) and compositions aren't as elaborate or as complex as classic Genesis or Marillion, but Clockwork Revenge is a refreshing take on a classic idea. The album featured a nice gatefold cover (see below) with lyrics and graphics in the inner. Hopefully Aztec / Sandman will consider reissuing this one.
.
Airlord were one of the many New Zealand bands who headed for Australia to attempt to make their fortune; sadly, like so many others, they failed. Airlord had a fairly symphonic sound, although they never seem to go far enough over the top to really stand out from the crowd.
Airlord was formed in Wellington in 1976, played the pubs and flew to Australia the following year, recorded an excellent albeit ignored album, 'Clockwork Revenge', and disbanded in 1978. The group failed to secure a large New Zealand audience, largely because they performed original material. Airlord had to escape to Australia to earn a decent living, and although they were never a top draw card across the Tasman, their lifespan was a lot longer than had they stayed in New Zealand. 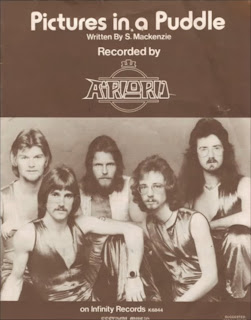 .
Before Airlord, Steve MacKenzie had teamed up with Reece Kirk to form a duo called Friends. They released two singles, one in 1974 and the other in 1975. Reece had also released a single by himself in 1972.
In 1979, after Airlord had disbanded, Steve MacKenzie and Alan Blackburn formed Machine with Tony Jax on drums and Steve Kulak on bass. They released one single in 1981 called "They Destroy Me" [extracts from sergent.com ]
.
This post consists of MP3 (320kps) ripped from Vinyl  and includes full album artwork (thanks to Midoztouch).  The quality of the recording is top notch with little or no surface noise.
The album opens with the sound of a wind up toy and then quickly jumps into a 'high energy piece' that is reminiscent of a Genesis classic such as Gentle Giant, featuring 'clown like' garble and rambling guitar & keyboard licks.  "Pictures in a Puddle" slows down the pace with its graceful vocal harmonies and is quickly followed by the symphonic masterpiece "Ladies of the Night" which is probably the best track on the album.
The remaining tracks on the album have their own highlights and as a whole, this album grows on you with every listen. I can't recommend this album enough if you haven't heard it before, but take note that this is the only album released by Airlord, so be prepared for that 'wanting more' feeling !