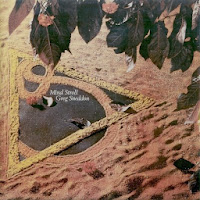 Australian composer and instrumentalist Greg Sneddon is a man of which not much is known today, but he has written himself into Australian history books due to one particular event: He assembled a group of backing musicians while he was recording the soundtrack of a musical called "Riff Raff", and following these recording sessions this group of musicians would later eastablish a solid career as Men At Work.

Prior to that Sneddon released a single solo album however. "Mind Stroll" was recorded in 1974 and released in 1975. A nice and varied example of keyboard driven, accessible symphonic rock, by some described as similar in style to Australian band Sebastian Hardie.


Greg Sneddon (Synthesizer - Arp) has been in the music industry since the early 1970’s, working in various bands (Alroy 1974 and Rainbow Theatre 1976), as a session man for the likes of Skyhooks (Living in the 70’s and Ego) and even the Comedy Company (Kylie Mole’s ‘I Go I Go’). Greg was also one of the founding members of Men At Work.
. 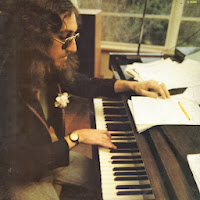 While studying economics in 1979 at university, Colin Hay met drummer Jerry Speiser and invited Speiser to one of the duo's informal jams at the Grace Emily Hotel. With a drummer on board Men at Work joined prog-rocking keyboard player Greg Sneddon to provide backing music for the amateur musical Riff Raff to which Sneddon had written the lyrics and music. For a short time Sneddon was an official member of Men At Work but multi-instrumentalist Greg Ham who provided keys, sax, flute and other instruments to the Men at Work sound replaced him.

Sneddon released a solo album in1974 called ‘Mind Stroll’ with a follow up single ‘Take It Slow and Easy / Minuet In E’ in 1975. Rare and essential mid 70s piano/synth driven melodic progressive rock, but was never picked up by the radios. With flavours of Rick Wakeman in his keyboard playing and vocals similar to Peter Gabriel, this album is still worth a listen, and a vital addition to any collector’s vault. One could say that this album was a launching pad for many oz progressive rock bands of the 70’, in particular Sebastian Hardie (aka Windchase).

Review 1
I'm in two minds about this album, first off it's an album by an exceptionally gifted youg Australian guy who displays great imagination and skill, but on the other hand you only get to hear him for a total of thirty minutes and 38 seconds. All of which makes you hold your breath, but Christ,  it's a bit steep to fork out nearly six dollars (full price for an album back in 1975!) for half an hour!
Greg writes all the material and plays (here goes) Acoustic Piano, Hammond B B3, ARP Pro Synthesiser, Mellotron, Clarinet, Spinnet, Fender Rhodes, tootles around with percussion, vocals and a Two Handed Plectrum, for which he composed a concerto.
The title track opens with a drifty chaotic Pink Floydian feel which soon gives way to the gentle voice of Mr. Sneddon singing lyrics a cut above the average love song
The strongest point on the whole album is the final cut on side two "Madman" which is an eight minute long ditty that posses an amazing number of changes and some superb synthesier playing and production. The lyrics on this one have been prepared with what looks like a great deal of thought to present inherent insanity:
"Madman to the rescue for a sandwich
Which he finds hard to find The Insides out"
I don't think Greg will be able to produce this album on stage unless he has two sets of hands as there is a fair amount of over dubbing (natch!). The voice of Dayle Alison blends naturally with Greg's keyboards most effectively on "Madman"
I can only recommend this record to you musically, he is streets ahead of any other solo performer in this land, but thirty minutes long just ain't long enough!  [review by Andrea Jones, RAM #7 May 31, 1975]
. 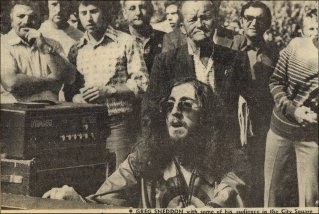 Review 2
A keyboard driven album, to me very reminiscent of Wakeman's early solo work. The two dominant elements to me are, on the one hand, a strong commercial soft-rock/pop edge, particularly to the fore on the ballad "Take It Slow And Easy", and the main themes of the title track, and "Concerto For Two Handed Plectrum"; on the other hand, busy keyboard solos (sometimes approaching Emerson territory, eg "A Spell of Destruction" and "Concerto"), and 'classical' flourishes (eg the main theme of 'Minuet in E", "Winter", the secondary theme of the title track). Layers of keyboards dominate the sound, with much use of the most voguish synth sounds of the day. Sneddon shares lead vocal duties with Dayle Alison, who has a lovely voice. Not a prog masterpiece, but a very interesting record, one that stands out among the minimal output of the symphonic or symphonic-influenced bands found in Australia during the 1970s [review by s175 at www.progarchives.com]
.
I gotta say I'm a sucker for anything keyboard related, and this album fits beautifully into this category. Although Sneddon was not a Rick Wakeman or Ken Hensley, he certainly had great talent on the keyboard and was well ahead of his time in creating a unique style of symphonic rock. It is just a shame that he never recorded more as a solo artist and could have easily joined ranks with the likes of Mario Millo to produce some great Australian movie soundtracks. One can only wonder what the pair would have dreamed up.
This post is a rip (MP3 at 320kps) taken from my cassette tape which still plays as good as the day it was released some 38 years ago.  Full album artwork for Vinyl, CD (thanks to Woodynet at Midoztouch) and Cassette are included and a scan of the RAM record review.
.
Track Listing