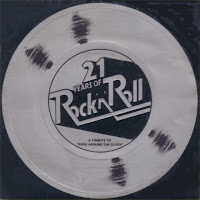 "Rock Around the Clock" is a rock and roll song in the 12-bar blues format written by Max C. Freedman and James E. Myers (the latter under the pseudonym "Jimmy De Knight") in 1952. The best-known and most successful rendition was recorded by Bill Haley and His Comets in 1954. It was a number one single on both the US and UK charts and also re-entered the UK Singles Chart in the 1960s and 1970s.

It was not the first rock and roll record, nor was it the first successful record of the genre (Bill Haley had American chart success with "Crazy Man, Crazy" in 1953, and in 1954, "Shake, Rattle and Roll" reached No. 1 on the Billboard R&B chart). Haley's recording nevertheless became an anthem for rebellious Fifties youth and is widely considered to be the song that, more than any other, brought rock and roll into mainstream culture around the world. The song is ranked No. 158 on the Rolling Stone magazine's list of The 500 Greatest Songs of All Time. [extract from wikipedia]
. 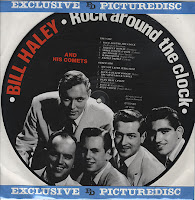 21 years of Rock and Roll, "Rock around the Clock" was released in 1977 to celebrate the 21st anniversary of the release of Bill Haley's "Rock Around the Clock," 2SM and its sister radio stations, 3XY in Melbourne and 4IP in Brisbane, put out a re-make of the song with a host of stars doing the vocals including: Glenn Shorrock, Shirley Strachan, John Paul Young, Daryl Braithwaite, Renee Geyer and Frankie J Holden.
.
The rear sleeve states:
'The record that launched the Rock 'n' Roll era became a hit in Australia in July, 1956. It proved to be one of the most fantastic hits of all time with collective sales estimated at over 22 million. 'Rock around the Clock' has been waxed in thirty-five different languages with over 140 versions globally'.


2SM/3XY/4IP with the ANZ Bank commissioned the cream of Australian rock talent to record this limited edition tribute to 21 years of Rock 'n' Roll. Hope you enjoy it."
.

.
The artists appear by courtesy of:
Glenn Shorrock - E.M.I. Records
Graeme 'Shirley' Strachan & Frankie J. Holden - Mushroom Records
John Paul Young - Albert Productions
Daryl Braithwaite - Razzle Records
Renee Geyer - R.C.A. Records
.
This is a rather Obscure 7" Single as it was only released in Australia, in relatively small numbers and therefore it earns a place in this month's WOCK On Vinyl. Perhaps it should be renamed to:
"WOCK around the Clock" ! Ripped from vinyl in MP3 format (320kps)
.
Track Listing
01 - Rock Around The Clock (Tribute)
02 - Spoken Word History Of The Song Rock Around The Clock
.
Rock Around The Clock Link (13Mb)
.
Posted by AussieRock at 8:41 PM