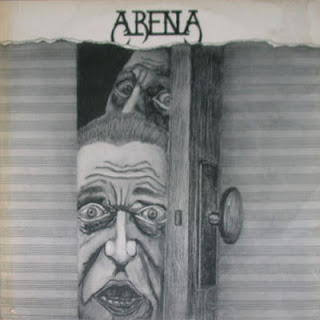 This is a highly sort after Australian Jazz funk issued privately in Melbourne. It includes the famous tune "The Long One" which was compiled on Ubiquity’s 'Heading in the Right Direction'. Could be described as the Australian Placebo.
Recorded in Melbourne sometime during the 70's (maybe 1976), this is one of those rare albums that hardly ever turns up on ebay and when it does, it goes for a small fortune. “Arena” was formed by Ted White and from what I gather this was their only release and the main reason this album was made was to test out the newly built “Crystol Clear” Studio’s in Melbourne, Australia.
.
After hearing there was a copy in town, and some running around Melbourne, I finally got a hold of this mythical Aussie holy grail piece at a reasonable price / trade. Arena is a 7-track progressive Jazz/Rock album by Melbourne musicians Ted White, Peter Jones, Graham Morgan, Bob Arrowsmith and Charlie Gould. The albums highlight, "The Long One" starts with a drum break and then heads into 6:32 minutes of funky madness. There are a number of other breaks and ill moments spread throughout this platter. Great listening and well worth the money and effort tracking this one down.
.
“The Long One” is the tightest cut on the album (sought after by collectors and beat heads for the dope drum break intro). It's a really Dope Jazz-funk instrumental and was included on the “Luv N’ Hate” compilation “Heading in the Right Direction” . The majority of the album is pretty dam funky with Samples and Drum breaks all over the place. Other stand out tracks include: "Scope", "Scrichell Cat” & “Keiths Mood”.
.

Their music is not dissimilar to that of Crossfire or Weather Report, however, it lacks the production and jazz hooks that made these bands famous.  You can preview Arena's music by taking a look at the following YouTube Clip.  . 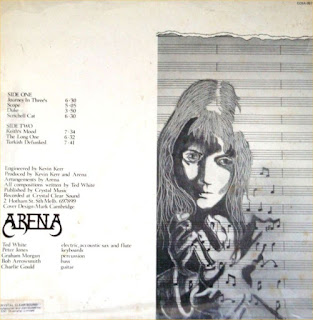 Although there is not a great deal of information for Arena, I was able to gather the following snippets of info on each of the band members:
.
Peter Jones
(Keyboards, Electric Piano)
Joined Mackenzie Theory is September 1973, played at the Sunbury 74 concert, and on their Bon Voyage album (a recording taken from their final concert at Dallas Brookes Hall, Melbourne)
For more info, see milesago.com

Ted White
(Lead Alto Sax / Reeds)
Ted has toured in South Africa and Hong Kong and has backed numerous Australian and overseas acts. He has played with names such as - The Bee Gees, Midnight Oil, Australian Crawl, Little River Band, Barry White, Sammy Davis Jnr, Village People, Dianna Ross, Gladys Knight & The Pips and Liberace.  Played at the Sunbury Rock Festival.
He arrived on the Gold Coast in 1963 playing various venues before becoming Musical Director for the Maori Castaways (Hi-Fi’s) and touring with them from 1964 – 68 going to UK, Malaysia, Thailand, Sweden and Finland.
Ted not only played with Arena in 1975-76, but he also wrote most of their material 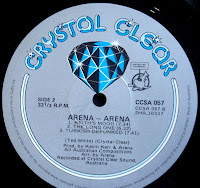 Graham Morgan
(Percussion, Drums)
Born in Melbourne Australia in 1937, Graham Morgan was educated at Melbourne Grammar School. He ventured to Los Angeles in 1962 where he studied under some of the best drummers of the time (Joe Morello, Murray Spivak).
Grahams outstanding career has spanned five decades and has taken him from playing on the first ABC television broadcast to recording a live album at Carnegie Hall with Cleo Laine and John Dankworth. He has recorded and played with numerous other artists such as John Farnham, Dame Kiri Te Kanawa, Clark Terry, Carmen McRae, Freddie Hubbard, Nancy Wilson, Melbourne Symphony Orchestra, and his own "Graham Morgan Jazz Quartet".
At GTV-9 Australia he held the position of staff drummer for over 20 years working on numerous shows including The Don Lane Show. At channel 10 (0) Graham worked with the Young Talent Time band for 10 years, The Ernie Sigley Show, Showcase and more.
His drumming can be heard on hundreds of filmscores and television/ radio commercials recorded during the 60's, 70's, 80's and 90's. He has earned himself the unique title of 'The Most Recorded Drummer in Australian History'
For mor info, see drumtek.com

Bob Arrowsmith
(Bass)
Played Bass for Bruce Woodley (of the Seekers) and for a long-running Melbourne revue band called the Roulettes. For other snippets of info, see milesago.com and mymusicrip.blogspot.com

Charlie Gould
(Guitar)
A session payer for many years, Charlie played with Beeb Birtles and Daryl Cotton in the highly successful Australian band 'Frieze' and earlier with the Melbourne group 'The Thunderbirds'
See also billyowens.tripodcom and Milesago.com

This post consists of an MP3 rip (320kps) taken from a clean Vinyl copy of the album. It includes limited album artwork and label scans.  This is a rarity not to be missed but best suits Jazz enthusiasts.
. 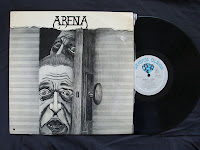