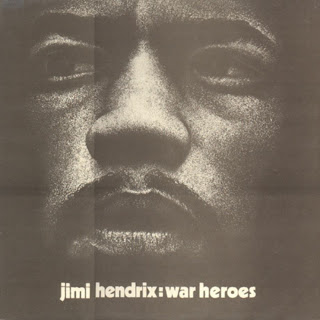 'War Heroes' was the third posthumous Hendrix Studio album to come out under Michael Jeffery's (Hendrix' manager) supervision.
Had it been tough for Eddie Kramer and Mitch Mitchell to complete the 2nd posthumous studio album 'Soundtrack of the film Rainbow Bridge" to a satisfying result, the compiling of 'War Heroes' was what Eddie Kramer called 'scraping the bottom of the barrel'.
With only two recordings that Hendrix had more or less approved during his life ("Izabella" & "Stepping Stone") and two older recordings which had not been released in the States yet ("Highway Chile" & "Stars That Play With Laughing's Sam's Dice" which would eventually turn up on 'Loose Ends' from 1973), Kramer -now fully assisted by John Jansen- once again went through all the tapes in the hopes to find useable pieces of music.
The collection they came up with did indeed not live up to the standard that was set with 'Cry of Love', 'Rainbow Bridge' & the live album 'In the West'. But for a more than average fan, 'War Heroes' does not disappoint. It has a few blistering instrumentals, that Hendrix may not have wanted to be released, but who demonstrate his fine talents on the guitar nonetheless. Only "3 Little Bears" and "Peter Gunn/Catastrophe" are throwaway's. 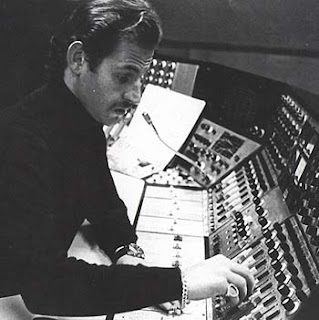 Apart from the fact that Kramer wanted to offer a glimpse of Hendrix working (and joking around) in the studio, he probably also had another motive for including these. Kramer realized that Michael Jeffrey and Warner Bros. would want him to compile more studio albums, and by using these two tracks he was able to back-up his argument that there simply were no quality studio recordings left in the vaults.
When Kramer delivered 'War Heroes' to Warner Brothers, he also made a silent statement by not delivering any background information on the songs for the sleeve. The gloomy front cover and the unexplained album title (was it supposed to be a link to 'Izabella') only added to the confusion.
The album sold a moderate 180,000 copies, and reached #48 in the US charts.
Together with 'Rainbow Bridge' & "In the West, "'War Heroes' was deleted from Warner's catalogue in 1975, after WB's chief Mo' Ostin decided that Alan Douglas was far more capable of maintaining the quality of Hendrix's posthumous discography than Michael Jeffrey and Eddie Kramer had been. A dumb and unnecessary move from Mo', as history has proven it. 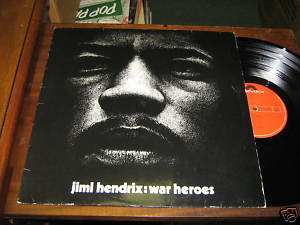 The fact that nearly all Warner executives at the time hated Michael Jeffery (who died in 1973) may have played a role in this decision. The 'Rainbow Bridge' album had been excusively licensed to Warner Brothers, and has been out-of-print in the states ever since, although the German division of Reprise started re-pressing the album on vinyl during the 80's.
Fortunately, 'War Heroes' and 'In the West" remained in print in the rest of the world, thanks to Michael Jeffreys' clever 1967 contracts . Polydor did the CD release of the albums in the eighties in Europe & Japan. It was later re-pressed in Europe (1991/1992) with a different catalogue number and different mastering. The sound had noise reduction and limiting -though not as severe as we know it by today's standards - in order to make the CD louder and cleaner.
The re-presses can only be clearly identified with by its number: 847-262-2
The original West-German 1988 CD (which was mastered from the same digital master as the Japanese P20P and P33P series) doesn't have any of this and is the source used here. 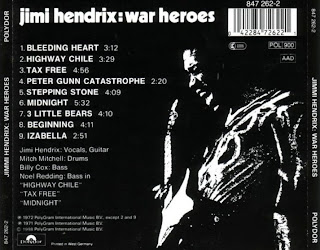 I purchased my vinyl copy of War Heroes from an import shop in the 70's, as the album was not officially released in Australia until the 80's. It is one of my prize possessions (a German pressing in mint condition) and was the first posthumous Hendrix LP that I bought. Of course, I now have all of them and can boast having 50+ Hendrix LP's in my collection. Favourite tracks are the instrumentals "Midnight" and "Beginning" (it's riff almost identical to the Stones' "Bitch") which demonstrate Jimi's ability to change key and time signatures at the drop of a hat.
The rip provided here was taken from CD at 320kps and includes full album artwork.
.
Track Listing
01. Bleeding Heart
Recorded with the Band of Gypsys including Juma Sultan on percussion on 12 December 1969 at the Record Plant Studio in New York City. Overdubs were added on 24 March 1970. Previously played by the Experience as a slow blues (a sublime rendition can be heard on Reprise's 'Concerts'), this version takes a more funky approach. Originally produced by Jimi Hendrix.
02. Highway Chile
Recorded with the Experience on 3 April 1967 at Olympic Studios, London, UK. This song reflected on Hendrix' restless time as a traveling musician on the Chitlin' circuit. In Europe it became the B-side of the "Wind cries Mary' single (released: 5 May 1967 in the UK) and later appeared on the Track/Polydor version of 'Smash hits', but wasn't released in the States until 1972 when 'War heroes' came out. This track only existed in mono until 2000 when EH released a newly made (but disappointing, IMO) stereo mix on the box set. Engineered by Eddie Kramer. Produced by Chas Chandler.
03. Tax free 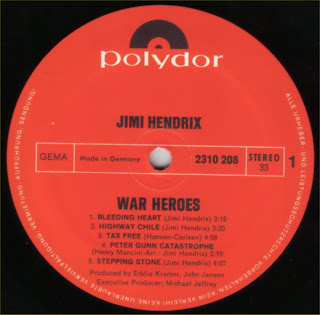 Recorded on 26 January 1968 at the Olympic Studios, London, UK and Record Plant, NYC, 1 May 1968. This was written by Sweden's Bo Hanssen and Janne Karlsson. Hendrix heard this instrumental while touring Sweden in 1967 and decided to record it. The Experience recorded five basic tracks, the fifth being successful. When production switched to over to the Record Plant Studio in New York, Hendrix worked on the track again there, trying to add some overdubs. The Experience added Tax Free to their set list during early 1968 and continued to play it live until early 1969. A live version can be heard on the now out-of-print "Live at Winterland" album. Originally produced by Jimi Hendrix
04. Peter Gunn / Catastrophe
Recorded mid-summer of 1970 at the Electric Lady Studios, NYC. 'Peter Gunn' was the first song that Jimi learned to play during his Seattle childhood days. 'Catastrophe' is a take-off by Jimi of the song 'Jealousy' popularized by Frankie Laine in late 1951. During the improvisation of 'Catastrophe' Jimi invented his own lyrics. This little ditty was added to the album by Eddie Kramer just to give a little insight into Hendrix's sense of humor, and is without a doubt the weakest selection. Maybe even the weakest Hendrix studio performance ever officially released. Engineered by Eddie Kramer. Originally produced by Jimi Hendrix
05. Stepping Stone
Originally recorded on 18 December 1969 with the Band of Gypsys at the Record Plant, NYC, and Electric Lady Studios, NYC. 1970. This recording was rush-released as a single with 'Izabella' on the B-side (Reprise 0905, Rel: 13/04/70), and quickly withdrawn again. Only a few copies of this single leaked out, making it a ultra-rare item. According to Hendrix: "Some of the copies out there have no low-end on them. I had to go out somewhere and tell the guy to remix it but he didn't. Sure, it matters..." The single contained a mix with Buddy Miles on drums. Jimi -who was still working on the recording- later opted to erase Miles' drums from the multitracks to be replaced by Mitchell's. However, the drums were never fully completed to Hendrix's satisfaction during his life and therefore it's a pity that Kramer and Jansen did not use the original mix with Miles' drums for this album. While being a far more technically skilled drummer than Miles, Mitchell failed to lay down the steady beat that this track really needs. The original mix can be heard on the OOP compilation 'Cornerstones: 1967-1970' and the 2001 EH release 'Voodoo child; The JH Collection'. Engineered by Bob Hughes 1969 at the Record Plant and Eddie Kramer at Electric Land Studios 1970. Originally produced by 'Heaven Research Unlimited' (aka Jimi Hendrix).
06. Midnight
Recorded by the Experience during October 1968 at the TTG studio's, Los Angeles, CA. These October sessions were booked to record the fourth Experience studio album, which never materialized. Later on in early 1969, the group cut a similar instrumental called "Trashman", that was eventually released (with lots of overdubs & editing) on the inferior Alan Douglas' produced 'Midnight Lightning' album from 1975. Engineered by Angel Balestier. Originally produced by Jimi Hendrix.
07. Three Little Bears 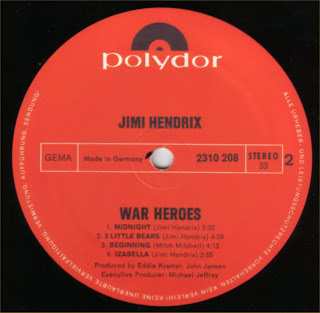 Recorded on 2 May 1968 at the Record Plant, NY. Another left-over from the 'Electric Ladyland' sessions. The first half of this extended jam was released on 'War Heroes'. The U.S. lp version had parts of Hendrix' frustrated comments censored by wiping them out or mixing them down very low ("Oh, fuck me" and "stop that shit, stop it"). In 1999, EH released the Jimi Hendrix "Merry Christmas and happy new year" EP, which made "Three Little Bears" available again. The complete extended version is only available on bootlegs - 'The Mixdown Master Tapes Vol 1-3', for example. Originally produced by Jimi Hendrix
08. Beginning
Recorded on 16 June 1970 and on 1 July 1970 at Electric Lady Studios, NYC. This instrumental had previously been known as 'Jam back at the house' and was developed during the Woodstock rehearsal sessions in the summer of 1969. It first appeared as a strongly edited live version on the 'Woodstock 2' triple album in March 1971. It's not very likely that Mitch Mitchell actually composed this track. It seems more likely that Mitchell was given this credit in an attempt to compensate him financially for his tireless dedication over the 1967-1971 period. This version is slightly edited as well, and a complete version can be found on bootlegs (ie Gypsy, Sun and Rainbows: Shokan) Originally produced by Jimi Hendrix.
09. Izabella
Recorded on 28/29 August 1969 at the Hit Factory, NYC, and featured the "Gypsy suns and rainbows" line up with Mitchell being replaced by Miles. It was released first as a B-side on a quickly withdrawn single (see "Stepping Stone" details). However, unlike "Stepping Stone" this recording was not further overdubbed, and appears here in a slightly different mix. The original mix can be heard on EH's 2001 release 'Voodoo child: The JH Collection'. Originally produced by 'Heaven Research Unlimited' (aka Jimi Hendrix)
.Band Members:
Jimi Hendrix (Vocals, Guitar)
Mitch Mitchell (Drums)
Billy Cox (Bass)
* Noel Redding plays bass on Highway Chile, Tax Free and Midnight
+ Buddy Miles plays drums on Izabella
..
War Heroes Link (80Mb) New Link 12/04/2020
.