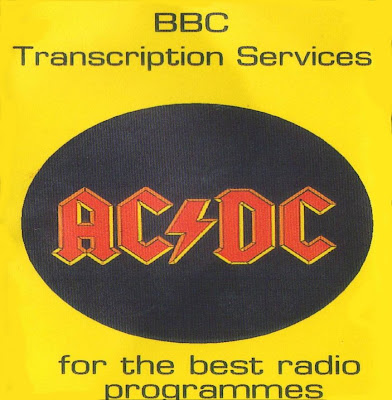 AC/DC are an Australian rock band formed in 1973 by brothers Malcolm and Angus Young. Although the band are commonly classified as hard rock and are considered a pioneer of heavy metal, they have always classified their music as rock and roll.
AC/DC underwent several line-up changes before releasing their first album, High Voltage, in 1975. Membership remained stable until bassist Mark Evans was replaced by Cliff Williams in 1977 for the album Powerage. The band recorded their highly successful album Highway to Hell in 1979.
Lead singer and co-songwriter Bon Scott died on 19 February 1980, after a night of heavy alcohol consumption. The group briefly considered disbanding, but soon ex-Geordie singer Brian Johnson was selected to replace Scott. Later that year, the band released their best-selling album, "Back in Black". And of course the rest is history, so I'm not going to bore you with the rest of their biography!
.As you are probably aware, there are literally hundreds of AC/DC bootlegs available for the hungry ACADACA fan, but few carry the stigma of the BBC Transcription Services LP which is a highly sought after bootleg.
According to a posting on the AC/DC Highway To Hell web site, these promotional only BBC transcription discs were issued to radio stations in 1976, 1978, and 1980. The originals are extremely difficult to find, as they were supposed to all be sent back to the company for destruction. Some of these didn't get sent back, and made it into circulation. There is only a handful of known copies in existence, and all have GREEN/WHITE Labels, (not black/white labels as found on Bootleg versions) and are valued $500 and up.
This 1980 bootleg (ripped from tape but also available on CD) is a combination of the 1976 and 1980 BBC transcription discs, as described below.
.

.
BBC Transcription Services CN 2647/S Released 1976 (with Cue Sheet)
Side 1: Live Wire, It's A Long Way To The Top, Soul Stripper, High Voltage.
Side 2: Max Merrit & The Meteors live.
This very first AC/DC promo-only LP features their famous London Marquee concert of July 76 on side 1 (although the BBC broadcast also included "Baby Please Don't Go", not on the album), and Max Merit on side 2. Watch for the counterfeit copy issued in the late 80's, which features Def Leppard on side 2, and has a black & white label. The original BBC Transcription discs have the green & white label, and were issued in a plain yellow sleeve.
Two other AC/DC BBC discs exist, one issued in 78 with the London Oct. 77 performance (one side only), and the other includes the London Hammersmith Nov. 79 concert (full album) issued in 1980. The later has also been heavily bootlegged. The originals are worth $200 and are extremely rare.
.
Concert Details
.
1976 UK & Europe Summer Dates
Mon. 26 Jul. 1976 : London, UK (Marquee)
Set list: (Exact set list unknown, but certainly included most of these tracks).
# Live Wire
# Rock 'n' Roll Singer
# She's Got Balls 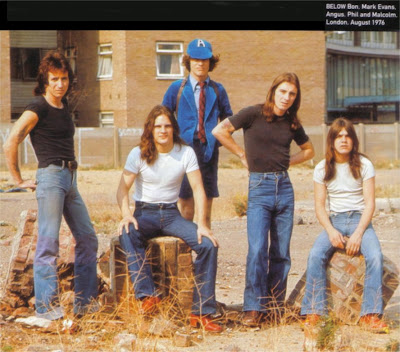 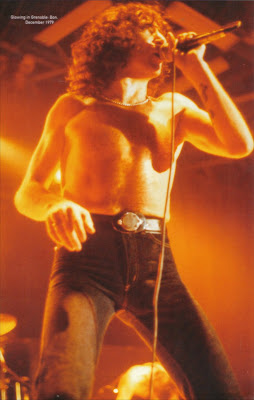 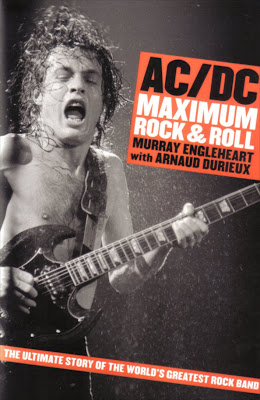 To help put the London Marquee Concert into context, I am including the following transcript taken from the recent AC/DC biography by Murray Engleheart and Arnaud Duriex called 'AC/DC Maximum Rock & Roll', which refers to these famous Marquee concerts.
.
The first day of AC/DC's European gig, London's Sun ran a full-page feature on the band under the headline 'Power Crazy!' Given a landmark residency at the Marquee had been secured for every Monday from 26 July until 23 August, the article couldn't have been more perfectly timed had it been paid advertising.Carson had secured the residency after he approached Jack Barry, who ran the legendary club.Phil Carson: 'The first time [at the Marquee a few weeks earlier], there were about 15 Swedish au-pair girls that somehow had heard of AC/DC — God knows why — and 20 or 30 other people, because people would go there anyway, because it was a rock club. But after the third week you couldn't get a ticket. That's how quickly they caught on. We still didn't sell very many records in the beginning, but they did something to a live audience, which they managed to keep doing all this time. And they built their own audience.'Before long, a line of fans began to assemble as early as five in the afternoon, all desperate to be among a sea of more than a thousand bodies compressing themselves into the sweltering 700-capacity club to see AC/DC blast away at nine. The situation got to the poi 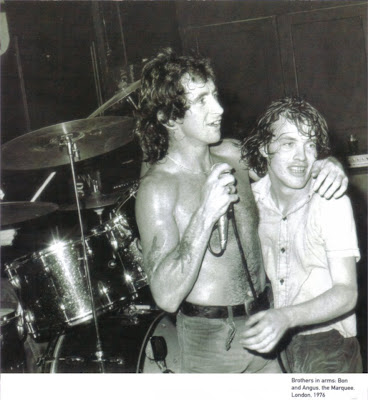 nt where the police had to control the crowd and local TV crews arrived to cover the mayhem. After the show, fans would emerge near naked after stripping down to try to combat the intense heat, which was many times higher than the scorching summer temperatures outside.The band were forced to do likewise, long before they got back to the Marquee's tiny dressing room. Angus would routinely end up playing in his underwear and even played completely naked on one occasion.'The place looked like a nudist colony by the time we finished,' Bon told Debbie Sharpe at the Melbourne Herald on 4 September 1976.The Australians smashed the Marquee's attendance record on more than one occasion and, towards the end of their stay, additional nights were put on in an attempt to cope with demand. Little wonder that Jack Barry was quoted as saying AC/DC were 'the most exciting band I've seen play at the Marquee since Led Zeppelin'.Michael Browning: 'I saw a documentary on the Marquee — which had been around for a while, admittedly — where 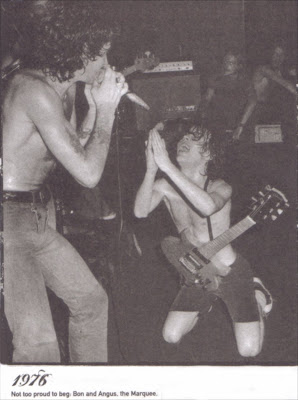 the owners were talking about bands that had played there and they totally excluded AC/DC, which I found extraordinary. They broke the house record there — what they had there was definitely historic. I've never seen a place as packed and I've never seen so much perspiration pouring down walls. It was literally like there was a hose around the top of the walls.'Among those who put themselves through the physically taxing experience of seeing AC/DC at the Marquee were, surprisingly, two former members of Creedence Clearwater Revival, who were on a reconnaissance mission.Michael Browning: 'The guys from Creedence Clearwater — the rhythm section — came down, because Atlantic were talking to me about those guys getting involved in the production with AC/DC.'The proposed alliance didn't get any further than the preliminary planning stage for unspecified reasons.Others who crossed paths with AC/DC at the hallowed club threw down a challenge rather than a business proposition. Their rivals for supremacy at the Marquee were Eddie and The Hot Rods, who had recorded a blazing seven-inch single called 'Live At The Marquee'.Hot Rods singer Barrie Masters recalls the battle for the famed venue.'With Hendrix and the Stones, it was the prestige really of the name the Marquee. To take the record in there was something else. We was close to the record a couple of times and we never did take it at first, and the guv'nor then, Jack Barry, kept winding us up. When we did finally take it we had a big celebration and a big drink-up afterwards, because we thought, great, our names will be in books and everything! Then literally it was only one week later and AC/DC took the record 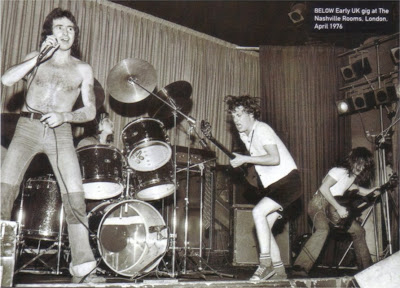 from us!'The crush was so much at the front there, especially towards the end of the set, it was just getting silly. It was so hot in there, it was absolutely unbelievable. People were just passing out and the ambulance people couldn't get in to get people out. So, literally, if people passed out or were hurt, people were just picking them up and carrying them over their heads. That's the thing at the AC/DC gig I remember; people being carried out!'Some of Angus' other antics at the Marquee did little to shut down the media headlines that tied the band to native Australian animals: like his special audience treat of stripping off and hopping around the stage like a naked perspiration- and snot-covered kangaroo, a trick he claimed he learnt from Bon.
.
This post (sourced from the www some time ago) consists of an MP3 rip (192kps) taken from cassette tape (some spooling problems can be detected in the first 2 tracks but are only minor) and includes limited artwork and all photos featured above (sourced from 'AC/DC Max Rock & Roll' with thanks).
.
Track Listing 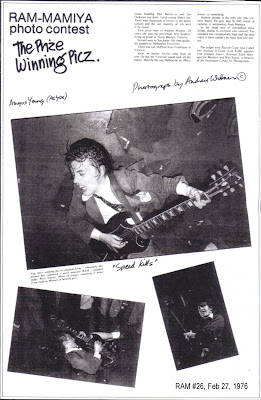 Posted by AussieRock at 7:14 AM