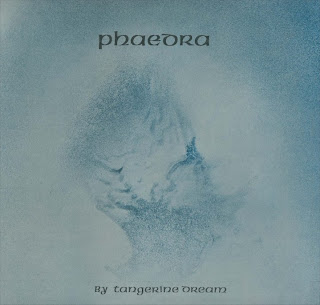 Tangerine Dream is a German electronic music group founded in 1967 by Edgar Froese. The band has undergone many personnel changes over the years, with Froese being the only continuous member. Drummer and composer Klaus Schulze was briefly a member of an early lineup, but the most stable version of the group, during their influential mid-1970s period, was as a keyboard trio with Froese, Christopher Franke, and Peter Baumann. Early in the 1980s, Johannes Schmoelling replaced Baumann, and this lineup, too, was stable and extremely productive.
.
Tangerine Dream's early "Pink Years" albums had a pivotal role in the development of Krautrock. Their "Virgin Years" and later albums became a defining influence in the genre known as New Age music, although the band themselves disliked the term.
.
Tangerine Dream released the album 'Phaedra' in 1974, an eerie soundscape that unexpectedly reached #15 in the United Kingdom album charts and became one of Virgin's first bona-fide hits. Phaedra was one of the first commercial albums to feature sequencers and came to define much more than just the band's own sound. 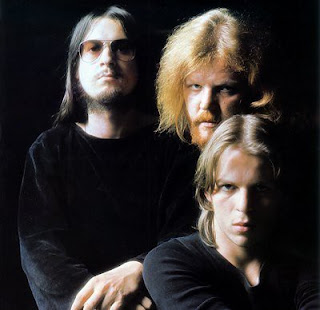 This album's name derives from Greek mythology and it was the opener for the band's international career in May 73. For most of the sequences, the Moog sequencer was used for the first time on a Rock & Pop record.
The creation of the album's title track was something of an accident; the band was experimenting in the studio with a recently acquired Moog synthesizer, and the tape happened to be rolling at the time. They kept the results and later added flute, bass-guitar and Mellotron performances. The cantankerous Moog, like many other early synthesizers, was so sensitive to changes in temperature that its oscillators would drift badly in tuning as the equipment warmed up, and this drift can easily be heard on the final recording. This album marked the beginning of the period known as the Virgin Years.[extract from wikipedia]
.
Phaedra remains Tangerine Dream’s most recognized and best-selling album today. Despite this, it also thankfully remains a challenging work to absorb, to the extent that I’m somewhat surprised it enjoyed the commercial success that it apparently did. In any case, we’re talking indispensable stuff with this one. With the move to Virgin and improved production, Phaedra represents peak work from this band –a classic of ambient and electronic music that sounds just as great today as it did back then.
. 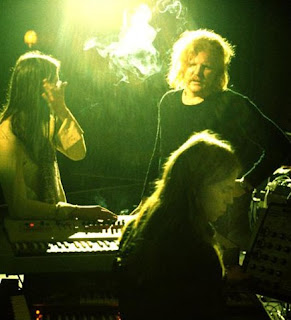 Album Review
The watershed album for Tangerine Dream, 'Phaedra' was their first release for Virgin Records, . If 'Zeit' was music recorded on Jupiter, then this was music recorded on Pluto, it is icy, distant, alien. The beginning moments of the title track always manage to bring shivers up my spine, as we are gently blown by a jet stream from up above, until slowly descending down into a mechanical throbbing like something you'd imagine hearing in a mad scientist's lab or in the shadowy corridors of an H.R. Giger painting. Gradually, this throbbing speeds up, until an angelic mellotron choir parts the waters. Soon over this, enter a wavering mellotron string lead, swirling in and out like quicksilver, and in the hands of VCS3 manipulation, almost sounding like a Moog at times. This early climax, perhaps the most incredible section of the title track, then hangs a sharp left turn unexpectedly into a new terrain of pulsing sequencing that would become the band's signature for the remainder of the 1970s. This similarly builds slowly to a peak, before screeching to a halt altogether once it reaches its top limits. Then the listener is left alone on an immense, deserted beach, with only synth-gulls and lonely mellotron to provide companionship. The haunting disorientation of the children's playground in the distance is the icing on the cake. On my remastered CD, this is placed as the beginning of the next track, "Mysterious Semblance at the Strand of Nightmares," and as I never owned the original LP I ass 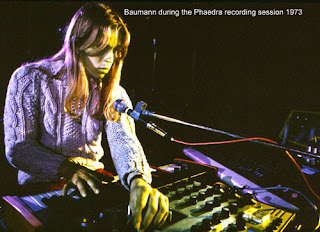 ume that's where it should be — but for me it will always be the close of title track.
.
"Mysterious Semblance" is pretty much Froese and one of the all-time classic mellotron tracks: ten minutes of pure, unadultered 'tron beauty. To date, the only other track I've heard yet that equals it as a mellotron showcase is Popol Vuh's "Aguirre." Despite its foreboding title, it is for the most part a soothing, peaceful piece, and one that can't help but evoke the blue and white upper-reaches of the sky, especially with the windy bursts of white noise that augment the mellotron's song. The two remaining tracks, "Movements of a Visionary" and the Baumann-composed, quiet-as-a-whisper "Sequent 'C'" are also quite strong.
.
Phaedra remains Tangerine Dream's most recognized and best-selling album today. Despite this, it also thankfully remains a challenging work to absorb, to the extent that I'm somewhat surprised it enjoyed the commercial success that it apparently did. In any case, we're talking indispensable stuff with this one. With the move to Virgin and improved production, Phaedra represents peak work from this band--a classic of ambient and electronic music that sounds just as great today as it did back then. [review by Joe McGlinchey]
.
I have vivid memorie 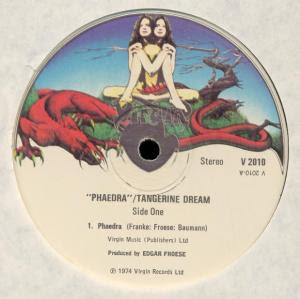 s of hearing the haunting sounds of Phaedra for the first time while attending a mate's party in my teenage years, when the party had died down and everyone was too drunk to dance. The sounds that came out of his pseudo-surround sound system (read: wall mounted speakers in garage) were something I'd never heard before and the almost 17min trip to another galaxy was profound to say the least. Tangerine Dream (or any other German band to be exact) were unknowns in Australia at the time, but Phaedra definitely changed this for ever. Needless to say, I couldn't wait to get my hands on a copy of this now legendary LP, especially as it also featured the novel Virgin label logo, which I'd never seen before either.
I now share this album with you in this post, an mp3 rip (320kps) taken from that very same copy which I have nurtured over the years. I am also including artwork for both LP and CD along with some select photos of the original lineup. The above photo of Peter Baumann playing at the time of Phaedra's recording was sourced from TangerineMusic with thanks.
So sit back, relax, and let the mirage of Phaedra sounds take you on a journey to far away mythological places and times.
.
Track Listing 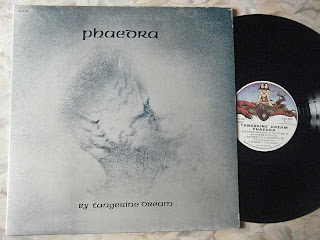