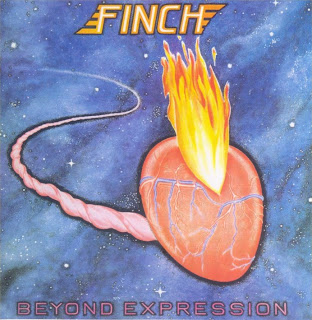 Foundation of Dutch progrock band Finch was laid by bass player Peter Vink and drummer Beer Klaasse (both ex-Q65 and The Kjoe). They were eager to play progressive music: Peter was impressed by the symphonic rock of Yes and Beer by the improvised rock of Mahavishnu Orchestra and Cream. After some sessions and failed efforts to find a good singer, the new band switched to instrumental music with this line-up: Peter Vink, Beer Klaasse, the 19 year old "guitar virtuoso" Joop van Nimwegen and keyboard player Paul Vink. With two Vink’s in the band the name became Finch, the English translation from this Dutch name. The EMI sub-label Negram was willing to invest in the new progrock band, in ’75 this resulted in the debut-album "Glory of the Inner Force" (worldwide sold 20,000 copies). New keyboard player Cleem Determeijer’s interplay with guitarist Joop sounded captivating and the first album was hailed by the music press. The single "Colossus" (’75) wasn’t successful but it’s now a hugh collector’s item. In ’76 the second album "Beyond Expression" was released, it was acclaimed as Album of the week by radio and the broadcasting company Veronica and known music 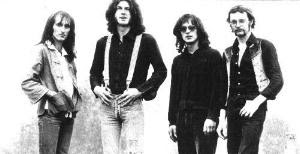 magazines were very positive. The future looked bright for Finch: sold out concerts, worldwide sales (15,000 copies) and in Japan Finch became almost as popular as other Dutch progrock bands Focus and Earth & Fire! Unfortunately Cleem was no longer able to combine the music with his classical study, he was replaced by Ad Wammes and, due to musical disagreement, Hans Borsboom replaced Beer Klaasse. This new Finch line-up released the third album entitled "Galleons of Passion" in ’77, it was not received very well though the sales flagged around the 11,000 copies. It turned out to be the band’s swansong until in ’99 the Dutch record company Pseudonym Records released a 2-CD, including fine demos of the "Galleons of Passion" album and exciting live material from ’76.Slightly less frantic and a bit

more challenging,
Finch’s second album rounds off some of the sharp edges, but it’s no less adventurous than the debut.The 20-minute “A Passion Condensed” will probably stand for all time as their defining masterpiece, its mood changes and structural layers revealing themselves after many attentive listens. Each passage merges easily into the next, showing Finch at the top of their game, each member completely dialed-in and making this huge piece work. The are times when one is almost tricked into thinking that it is Focus playing rather than Finch, so and so their Dutch counterparts have obviously been a big influence. In particular the interplay between Joop’s complex guitar work and Cleem’s keyboard runs is very reminiscent of work of Jan Akerman and This Van Leer.“Scars On The Ego” smashes through next, standing as their heaviest-ever track. Based around a riff that feels like pure epic metal, the middle of the song settles into a hypnotic cosmic caress before erupting in a fury of sparks and fire (thanks to the wailing punishment keyboardist Cleem Determeijer and guitarist JoopVan Nimwegen dish out to their instruments).While the title of third track “Beyond The Bizarre” would seem to indicate a wilder ride ahead, it is simply 14 minutes of typical Finch. It bounces between mellow and manic, highlighted by a joyous lightning-speed workout from the stringed instrumentalists.

About 2/3 of the way through the song they break into a cosmic interlude which sounds so much like a section from Yes’s ‘Close To The Edge’ that you’d swear you were at a Yes concert. But credit to Finch – 'Yes' are a band that anyone would like to be mistaken for. Beyond Expression is not as direct as their first album, nor as refined as their third, but this second album can probably be considered the most challenging and diverse of the three Finch albums. I intend to post the other two albums when time allows.
The only disappointment is the albums front cover – what were they thinking of. A fiery heart attached to what looks like an umbilical cord is not what I would describe as Beyond Expression – perhaps they should have called it Beyond Belief !
The rip included here was taken from Vinyl at 320kps and full album artwork is included.
.
Track List :
01. A Passion Condensed - 20:08
02. Scars On The Ego - 8:54
03. Beyond The Bizarre - 14:24
.
Band Members:
Cleem Determeijer (keyboards)
Beer Klaasse (drums)
Joop Van Nimwegen (guitars)
Peter Vink (bass)
.
Finch Link (84Mb) REPOST
.