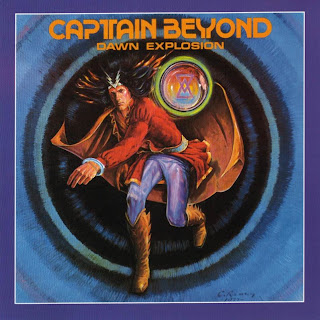 Captain Beyond has a rather legendary status in the ranks of hard '70s rock. Their fame is actually in the "cult status" category. Dawn Explosion, their third album, was a good disc, but really did not live up to the greatness of the first two releases.
The only personnel change is on lead vocal, where Willie Daffern has replaced Rod Evans, and though Daffern is a decent singer, he didn't have the presence or vocal force that Evans exhibited on their two earlier albums. Daffern started his career as a drummer and in this role he played on albums by Hunger and Truk, the latter a cult act among 70s hard rock konnoisseurs who released a very good album on Columbia in 1970. After his stint in G-Force post Pipedream he released a solo album on Rochsire and a couple with an act called ZoomLenz.
Larry "Rhino" Reinhardt's guitar riffs hard when the going gets tough and waxes melodic at the appropriate introspective moments, but other than one passable pop song ("Do or Die") and an amusing Jeff Beck-ish instrumental ("Oblivion"), the remaining tracks are not really up the standard of their first two albums.

Still, in showcasing the group's unique blend of hard rock, psychedelia, and progressive-type arrangements, there is still some strong material present. The hard-edged and frantic "Icarus" and the nearly ethereal, building mini-epic "Breath of Fire (Part 1 and Part 2)" can arguably stand up to most of the material on the other releases. Where they falter here is on such songs as "If You Please" and "Midnight Memories," which seem to be trying to reach toward accessibility, but come much closer to banality and mediocrity. 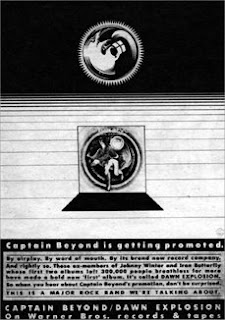 If you are a fan of Captain Beyond then you shouldn't pass up this final offering from a legendary band, otherwise, start with their first album which is far superior, and then if you are looking for another fix, then move onto their more recent LP's
Reinhardt and Caldwell reformed Captain Beyond in 1998 with Jimi Interval on vocals, Dan Frye on keyboards, and Jeff Artabasy on bass. Since then they have been performing at shows and have released a four track EP - Night Train Calling EP (2000).
The rip included here was taken from Vinyl at 320kps and includes full album artwork.
Note: CD reissues split "Breath of Fire, Part 1 & Part 2" into two tracks (subtitled "A Speck Within a Sphere" and "Alone in the Cosmos", respectively), and "Oblivion" into three tracks (with the preceding "Space Interlude" and succeeding "Space Reprise" being the sound effects and percussion that bookend the main section of "Oblivion")
.
Track Listing
01 Do or Die
02 Icarus
03 Sweet Dreams
04 Fantasy
05 Breath of Fire (Parts 1 & 2)
06 If You Please
07 Midnight Memories
08 Oblivion
09 Space Reprise
.
Band Members
Willy Daffern (vocals)
Lee Dorman (bass, vocals)
Larry "Rhino" Reinhardt (guitar)
Bobby Caldwell (drums)
.
Captain Beyond Link (78mb) REPOST
.
Posted by AussieRock at 8:04 PM