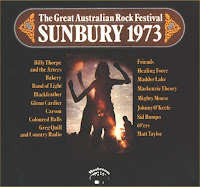 The word 'Sunbury' has etched itself into Australian rock music folklore. Forty years ago it was a farming town just 40 'miles' (70s speak) north of Melbourne, an hour's drive from suburbia into a gently rolling rural landscape. In 1972 and for the three subsequent years, during the late January Australia Day weekend the word 'Sunbury' became associated with a rock music festival on a farm out of the Sunbury township. Today suburbia lurks so close to the Sunbury Pop Festival site if you turned up Billy Thorpe's amp to its obligatory '11' you'd get complaints from the neighbours on the hill. But the site is still there, identified only by the rusted wire fence surrounding the area where the stage stood, and the foundations of the toilet block nearby, in front of Jackson's Creek. Behind the creek a steep incline, in front a gently rising hill, a natural amphitheatre. 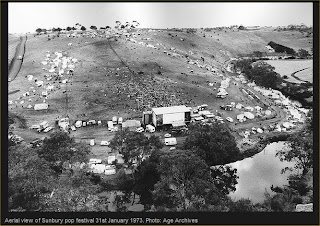 There had been rock festivals before and there have been rock festivals since. But Sunbury looms large as 'Australia's Woodstock' - erroneously. It could just as easily be called the first 'Big Day Out' -- held during the same weekend. Or a prototype of Meredith. Australia's real 'Woodstock' was held at Ourimbah in NSW on the Australia Day weekend in 1970. During the intervening two years 'the Woodstock nation' had been replaced by another generation of teenagers, another generation of music, another set of values The Beatles had been replaced by Led Zeppelin. But for the media those Woodstock images lingered. That's what they went to Sunbury looking for. That's what they came away with. That's what sticks in people's minds as 'Sunbury'. Those who were there remember the 'bonged out' sitting next to the underage drinkers and bikers collapsed in their own vomit after a night of shouting 'suck more piss' from the hill. The similarity between Sunbury and all festivals is the freedom to be young and free, to the soundtrack of the day's music. 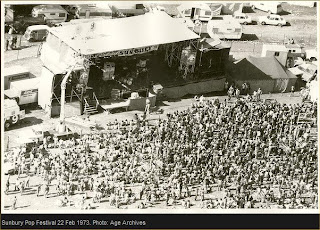 Australian music had shifted dramatically during those two years between 1970 and 1972, between Ourimbah and the year of the first Sunbury in 1972. In 1970 Australian music had struggled to be 'progressive' like the rest of the world. Our record companies weren't interested. Then during the last half of that year a record ban forced the Australian music released by the major record companies off radio airwaves, retiring many of the pop stars of the day. Music fans had to go 'out' to get their music fix. In Melbourne they found Daddy Cool and Spectrum north of the river. Chain and Billy Thorpe's 'new' Aztecs south of the river. In Sydney the music retreated to the Kings Cross nightclubs entertaining servicemen on 'r and r'. The first Sunbury festival tapped into that still very alive thirst for live music. Somehow Australian music had forgotten to look over its shoulders at overseas trends and musicians and their audience were happily following their own path. In January 1972 it led to Sunbury.
. 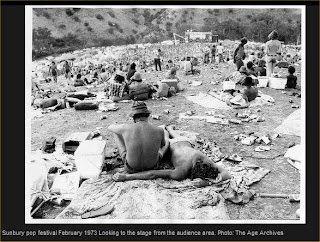 The festival had been organized by an unlikely 'hero', John Fowler, a middle-aged Channel Nine employee. While their children were smoking dope and drinking and dipping nude in Jackson's Creek elder Australians were watching John Fowler lighting the soundstage for their own addiction, 'In Melbourne Tonight'. Fowler and his advisers thought that the popular acts of the day weren't quite enough and for that first Sunbury Festival organised for the return of Max Merritt and the Meteors after just over a year in England. Ever competitive, Billy Thorpe would have made conquering the Sunbury hill his goal anyway. Having old rival Max top of the bill was an added incentive. Billy Thorpe and the Aztecs turned up the volume and made Sunbury 72 theirs'. Within weeks Billy released 'Most People I Know' and later that year a live album of the Aztecs at Sunbury became a national top ten. The only other Australian-made top ten album that year had been Daddy Cool's 'difficult' second album 'Sex Dope And Rock'N'Roll'

Sunbury 73 was set up as the most important event on the Australian music calendar. Clearly. whoever won the hill at Sunbury 73 was set up for the rest of the year. You had to be there.
A lot of people get the four Sunbury's confused. In their minds they've become one. But 1973 was THE one. In bygone years there had been a thing called the Hoadley's Battle Of The Sounds, where the bands of the day allowed themselves to be judged. The winners were kings for the year. Often the losers broke up to think of a way of winning the following year. That was the mood with which Australian music entered Sunbury 73. You had to be there. It was important to make an impression. It was the year the Sydney acts - Sherbet, Country Radio - descended on the festival, and Mississippi performed with a 35-piece orchestra. It was so important to be there, even pre-70s rock legend Johnny O'Keefe came, determined to stay in the game. And Michael Gudinski was there to record it for his just-formed Mushroom Records.
Of course Billy Thorpe was also there, returning just in time to top the bill after trying his luck in the UK. This was our chance to celebrate his return. There was no clear winning at Sunbury '73 but the points decision probably went to Thorpe. There were a lot of winners, a lot of sets went back to the traditional venues and found keen audiences for the rest of the year. [written by Ed Nimmervoli] 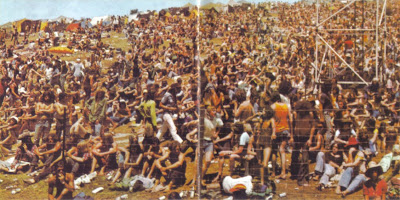 While Sunbury '72 was widely touted as the beginning of a new era, Sunbury '73 was the one that consolidated the festival's success. However it also marked a changing of the guard, with a number of notable bands -- Carson, Country Radio, Friends, Healing Force -- all splitting for good in the months following their Sunbury appearances. It was also the final Australian performance by Flying Circus, who had already been in Canada for some time. They returned specially for the festival, but were coolly received, and returned to Canada immediately after Sunbury, where they remained until they split some years later.
The Aztecs headlined again, reprising their huge success of the previous year and Max Merritt & The Meteors again returned from the UK to perform. One of the surprise hits of the festival was rock'n'roll legend Johnny O'Keefe; he was cheekily introduced as a "newcomer" by MC Paul Hogan, but despite an initially derisory reception, he won the crowd over and by the end of his set, as Ian McFarlane notes, he "had the audience of hippies eating out of the palm of his hand".


"Sunbury 1972 was the first, but the 1973 festival is often remembered as the best. It has a place in our music history, just like the vintage clips of the Easybeats performing 'Friday On My Mind' and AC/DC travelling down Melbourne city streets on the back of a tray truck while belting out 'It's A Long Way To The Top'."  - Steve Waldon, The Age 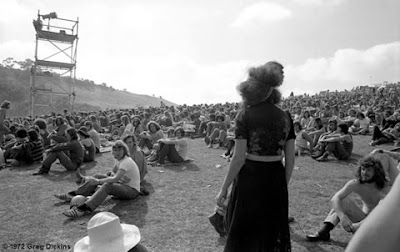 Like Sunbury '72, the performances were taped using a mobile multi-track facility; it is presumed that some film or video footage was made but it is not known how much of that (if any) still exists. The sound recordings were edited to become the inaugural release for the newly established Mushroom Records label, founded by Michael Gudinski and Ray Evans. With commendable hubris, it was the first Australian triple-album set ever released.
The fine performance by Carson (which would prove to be their last major concert appearance) was also released by EMI as the On The AirLP; this has long been out of print but it is scheduled for re-release on CD by Aztec Music. The other major recording culled from the festival was the extended early-morning jam session between The Aztecs, Lobby Loyde's Coloured Balls and Leo De Castro, which was released on the Havoc LP Summer Jam. This has recently been reissued on CD by Aztec Music. [extract from milesago.com] 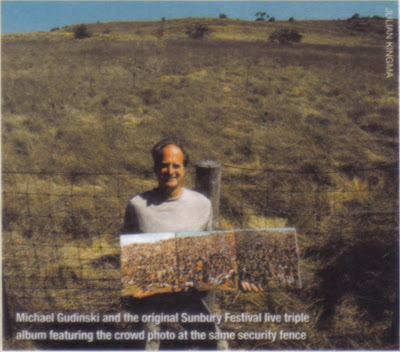 SUNBURY - THE VENUE
Owned by George Duncan, he generously offered the use of his property at no cost to the organisers, even going so far as allowing toilet facilities and rubbish bins to be installed on the property in later years of the festival. Which really makes sense, considering he’d have had as many as 40,000 people in his “backyard”. You don’t have to be a mathematician to know a crowd like that plus three days of food and booze equals a mess that would make even Keith Moon blush.

With the Duncans’ farmland providing a natural amphitheatre, the scene of the Sunbury festivals has since become an isolated area, far from the bustling hub it was during one of music history’s most famed events. Residential subdivision in the area has since limited public access to the site and redeveloped the landscape.

According to a document on the website of Hume City Council, little remains there now but there are still the remnants of the toilet facilities and bins, along with echoes of the event that linger to this day with “small artifacts such as items of footwear and drink can pull-rings” scattered over the area.
.
For more information on the Sunbury 73 concert, refer to the following websites:

hume.vic.gov.au
nla.gov.au
onlymelbourne.com.au
wikipedia.org
theage.com.au
.
It was the Sunbury 73 that got me first hooked on 'Aussie Rock'. My brother owned the triple album set originally (having being lucky enough to attend the festival) but I soon managed to talk him into selling it for a bargain basement price.  Being a young teenager at the time, I was listening to overseas artists like Robin Trower, Alice Cooper and Grand Funk Railroad. However, the bands and the infectious aussie rock that they played at this famous festival was the turning point in my life. I suddenly realised that there was 'real talent' in my own back yard.  And I've never looked back.
Bands like Madderlake, Chain, Carson, Blackfeather and the Aztecs have been a huge part of my passion for music and I owe it all to this wonderful recording, released on the legendary Mushroom label (thanks Gudinski) 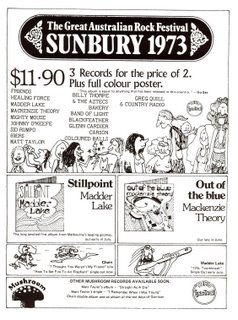 My only regret is that I was too young to attend the 73 Festival although I did manage to fulfill my long life dream to a point, by attending the 2010 Sunbury Backroad Festival, featuring Madderlake, Spectrum and Chain. See my review
If you haven't heard this Sunbury 73 recording, then you have really missed out on a vital chunk of Aussie Rock. Need I say more?
.
The post consists of an MP3 rip (320kps) taken from my cherrished vinyl copy, which is in relatively good condition considering the number of plays it has had. The artwork included (with CD2 and as a separate link) was taken from a CD release that was circulating on the web at one stage (possibiliy C/- of the Midoztouch Forum).
Some choice photos of the venue and crowd are also included.
As a bonus, I have included a recording of Mississippi's "Kings Of The World" which was also recorded at the Sunbury 73 festival but never made it onto the triple set (sourced through YouTube)

Note: There was also a promotional E.P released featuring 6 tracks taken from the triple Sunbury album set and is one of the items on my Holy Grail List of wants. I have yet to see it turn up on ebay, and can only dream of the day when I might find it! (see pictures below)
. 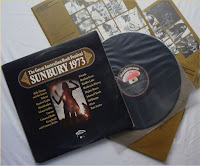 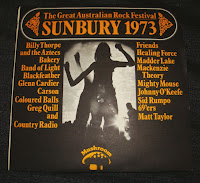 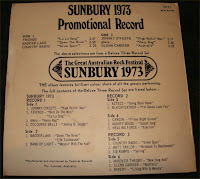 Sunbury Artwork & Photos
Posted by AussieRock at 11:35 AM