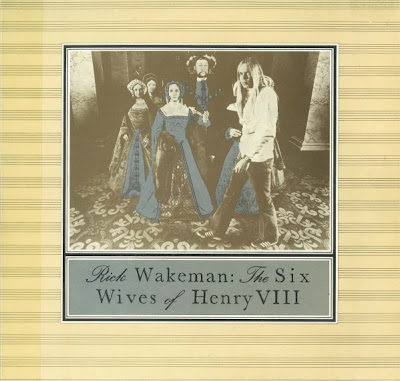 Rick Wakeman is an English keyboard player, composer and songwriter best known for his involvement with the progressive rock band Yes. Wakeman joined the folk group Strawbs in 1969 and played on three of their albums. He first joined Yes in 1971 to replace Tony Kaye, and left the group in 1974 to work on his solo career.
Wakeman began his solo career during his first run with Yes. His perhaps most known records being his first three, 'The Six Wives of Henry VIII' (1973), 'Journey to the Centre of the Earth' (1974) and 'The Myths and Legends of King Arthur and the Knights of the Round Table' (1975).
His debut studio album 'The Six Wives of Henry VIII' was released in January 1973 on A&M Records, prior to the release of YES's "Close to the Edge". It is an instrumental progressive rock album with its concept based on his interpretations of the musical characteristics of the six wives of Henry VIII. Wakeman decided on the concept in 1972 while he toured the United States with the rock band Yes. As he read a book about the wives on his travels, melodies he wrote the previous year came to him and were noted down. Wakeman plays a variety of keyboard instruments including piano, Minimoog 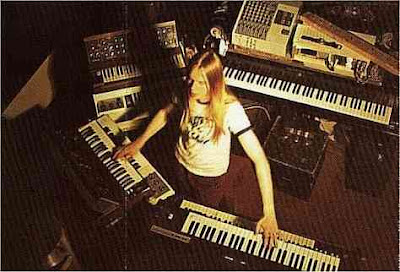 synthesiser, Mellotron, harpsichord and organ. Musicians from Yes and Strawbs, who he performed with prior to Yes, also play on the album [extracts from Wikipedia]
.
Review
Not only did this album help pave the way for progressive rock, but it also introduced the unbridled energy and overall effectiveness of the synthesizer as a bona-fide instrument. Many experts credit Six Wives of Henry VIII as being one of the first albums to bring keyboards to the forefront in an art-rock setting. Rick did get a little help from some of his Yes-mates, but essentially this album was his brainchild.
Six Wives gave Wakeman his chance to break away from the other instrumental complexities that made up Yes and allowed him to prove what 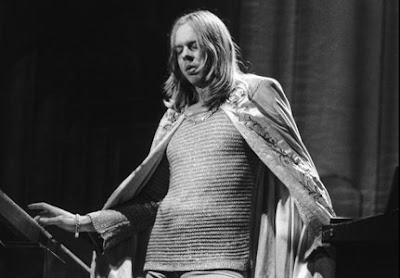 a driving force the keyboard could truly be, especially in full album form. More than just synthesized wandering, Wakeman astoundingly conjures up a separate musical persona by way of an instrumental ode to each of Henry VIII's wives through his dazzling use of the Mellotron, Moog, and Hammond C-3 organ. For example, Wakeman's fiery runs and fortissimo thwarting of the synthesizer throughout "Anne Boleyn" is a tribute to her feisty temper and valiant courage that she maintained while standing up to her husband. With "Jane Seymour," on the other hand, Wakeman's playing is somewhat subdued and gentle, which coincides with her legendary meekness and frailty, as well as her willingness to cater to Henry VIII. Wakeman's masterful use of his synthesizers is instrumentally stunning, as is his talent of magically shaping the notes to represent behavioral idiosyncrasies of his characters. Yes bassist Chris Squire lends a hand on "Catherine of Aragon," while guitarist Steve Howe and drummer Bill Bruford appear on a few tracks as well, as does former Strawbs member D 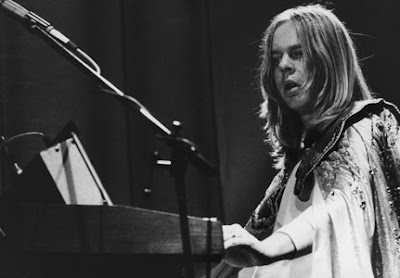 ave Cousins, playing the electric banjo. The Six Wives of Henry VIII unleashes the unyielding power of the keyboard as a dominant instrument, but also displays Wakeman at the beginning of an extremely resplendent career as a solo musician.
.
I have been a big fan of Rick Wakeman's since hearing his "Six Wives" album, buying most of his earlier 70s and 80s work and he was, along with Keith Emerson, one of my keyboard heroes, as a teenager. I found his music technically excellent and when playing with Yes his keyboard wizardry often complemented Yes’ more serious style with refreshing solos and inspired magical touches weaving their way through Yes' works.
This post consists of a rip taken from my 'treasured vinyl' at 320kps and includes full album artwork (with full inner gatefold depicting Ricks keyboards). I have also chosen to include rips of his Excerpts from Six Wives featured on Yes's triple live 'Yessongs' and live renditions of "Anne Boleyn" and "Catherine Parr" from his KBFH concert held in 1995 - absolutely brillant.
.
Below is a performance by Wakeman playing excerpts from 'The Six Wives Of Henry VIII' from Yessongs, 1973. 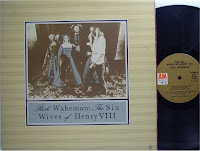