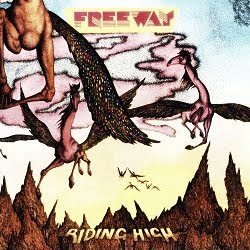 Not much is known about Freeway, a short lived quintet who sprang from Melbourne, Australia in the early 70's. Freeway's creative force was legendary Aussie guitarist Peter Laffy, who had also been a member of Fox. Another noteworthy member was Criston Barker, formerly of Ash and Hollywood. Freeway's lifespan was rather short, but their sole release, "Riding High" is an impressive one.
Produced by Jim Keays, "Riding High" is a breezy and smooth affair with plenty of piano, organ and female backup vocals fleshing out the sound. The band sounds unusually American and the performances here are flawless. Crunchy in all the right places with plenty of Allman Brothers style twin leads, this sounds 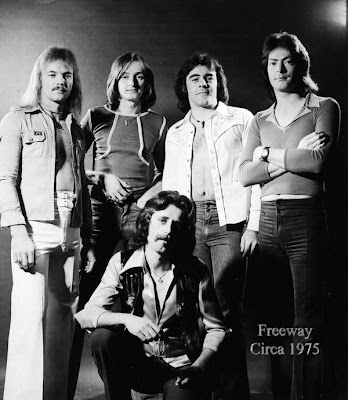 almost southern in places. In other places, the band explore high spirited R&B as well as hard rock. Surprisingly, this hodgepodge of styles is seamless and the overall vibe never deviates from one song to the next. Though its nothing revolutionary, the songs are well written and the production is crisp and clear.
Barker later joined Air Supply and currently plays with the 'Hepcats' while Laffy became a well-known television and radio host in Australia, as well as staying active with his own blues act, King Bees.
.
The following is an article taken from the 70's rock newspaper RAM #21 Dec-1975 , which featured Freeway in its Periscope column (specifically aimed at any new and promising bands)
. 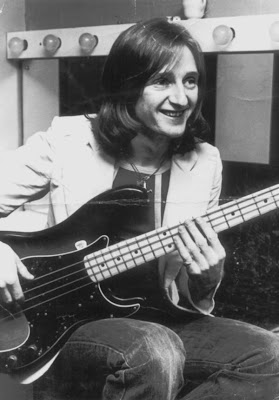 Freeway—Comparatively new band rides high, talks tough.
Melbourne rock group Freeway are currently riding high on a wave of success that is unusual for a comparatively new band. Freeway, a bloozy bawdy rollicking band of rockers have been playing together just on twelve months and now have an album ready for release at the end of November. The album, 'Riding High', is being handled by the Phonogram record company and will be released on the Philips label. A single from the album, also titled "Riding High", has just been released. This stint in the studio was the band's first venture into a professional recording studio. Your budding reporter was on hand to capture the historic moment when the band members left Armstrong's Studio 2 after having laid down the final track on the album.
First out of the studio was brawny vocalist. Frank Chic, covered with a sheen of perspiration and looking like he'd just done 15 rounds with an elusive microphone. "I work better when it's live," muttered Frank. "It's just a completely different thing when you've got your cans on and you're standing there just singing in an empty room ... there's no fucking vibe.' That's Frank... he's the type of singer who really feels at home when he's up on stage i 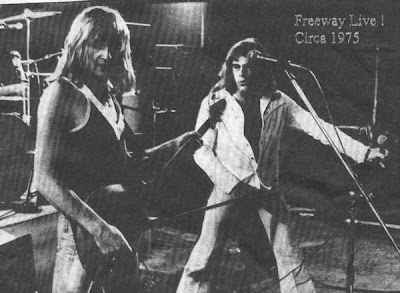 interacting with an audience. But Criston Barker, the band's bassist and co-songwriter had a different impression of the studio. "I dig working in the studio, I love it. It's an exciting experience. I really enjoy the live flash too, that s really good and a lot easier to get. You take the band high in a short space of time because of the spontaneity and audience adrenalin. That's the feeling we tried to create in the studio." To help the band achieve that spontaneity and to tide them over the hassles of a first ever recording, Jim Keays was co-opted as producer. Says Criston: "We all know Jim and it was good to walk into a studio with a guy we know. He's been into rock 'n' roll a lot and understands it, he's someone you can talk to and who knows your music."
Another friend 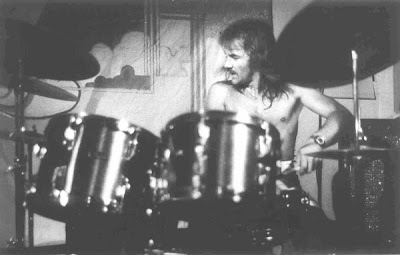 who helped out was Mr. El Mysterioso himself, Greg Macainsh, who blessed the band with his presence while overseeing the production of a song, "Sad Rock 'n' Roll", he had written for the band's first album. Criston takes up the story. "He came to see the band a few times and said he would like to write us a song. We learnt it in the studio the day we recorded it. We have now included it in our performances. Greg knew exactly what he wanted in the studio, he is great to work with." Apart from the Macainsh track, the alb

um was penned by Barker and lead guitarist Steve Welch. The songs reflect the title of the album. "Riding High" ... that's the philosophy of the band, to ride high; enjoy the good times, to rage and project that feeling to the audience. Criston explains: "It's out-of-the-bummcr music, it's up music. It's a statement against boredom." And that's the spirit of the band and the album — it's of scotch and bourbon and little bags of dope, and the road and the rock 'n' roll ladies — rock teasers, to plagiarise another of the song tides.
Criston pontificates: "The majority of bands being flogged left, right and centre are basically into the same sort of music, the bomp, bomp, bomp, all borrowed progressions, the sort of thing that's been done quite regularly over the past few years in Australia; we just don't want to be a band like that. We want to explore — new riffs new rhyming, totally original songs, we have high ideals of what we want to do, and it's working well."
.
This post contains a rip taken from Vinyl at 320kps along with album scans (sourced from Sunshine at Midoztouch with thanks). Unfortunately it does not include scans of the inner gatefold which I distinctly remember the LP having and featuring some great shots of the band playing live (I owned a copy as a teenager but have since misplaced it). I have also included a scan of the featured article taken from RAM along with several advertisements for the band and its album.
I would also like to acknowledge the photos that were sourced from Criston Barker's Myspace Page .