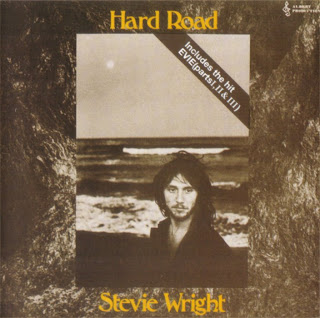 Stephen Carlton ‘Stevie’ Wright is an Australian musician and songwriter who has been called Australia’s first international pop star.
From 1965-1969 he was the lead singer for the Sydney-based rock and roll band The Easybeats, widely regarded as the greatest Australian pop band of the Sixties.
During his time with The Easybeats he was popularly and affectionately known as "Little Stevie". He co-wrote many of their early hits (including "Sorry" and "I’ll Make You Happy"), and was vocalist on their biggest hit "Friday on My Mind" (1967), which, in 2001, was voted the Best Australian Song of All Time and made the Top 20 in both the UK and the U.S. He was also renowned for his energetic stage performance which included acrobatic back-flips and mod dance moves.
After the break-up of The Easybeats in 1969, Stevie returned to Sydney from England. He spent a few months with a band called Black Tank which featured Stevie, Rory O'Donoghue (guitar/vocals, ex-The Pogs), Ken Firth (bass, ex-Tully) and Greg Henson (drums; ex-Levi Smith Clefs). That connection led to his later appearance with the 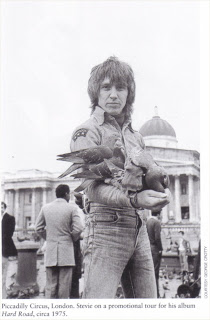 Aunty Jack team of Rory, Graeme Bond and Garry McDonald on the June 1973 ABC TV special Aunty Jack Rox On, where he performed four numbers -- "Gypsy", "Drug", "Hard Road" and "The Other Side" -- backed by the specially-assembled band all-star group Cool Bananas. By the time that special aired on TV, Stevie was well on his way back to the limelight.
In 1972-73 he won national acclaim for his performance as Simon Zealotes in Jesus Christ Superstar. He then achieved solo success when his old Easybeats band-mates Harry Vanda and George Young (now turned record producers) returned from the UK in 1973. He formed his own backing band, The Stevie Wright band for live performances in this time.
In 1974 Wright released the single "Evie (Parts 1, 2 & 3)". Written and produced by Vanda & Young, it became a hit — irrelevantly the only 11-minute song to chart at #1 anywhere in the world — and is now regarded as an Australian rock classic. Two Vanda and Young produced LPs followed: Hard Road and Black-eyed Bruiser. Wright, however, struggled with drug and alcohol addiction, which ultimately de-stabilised his new found success [Extract from http://www.legendsofrockfestival.com.au/]
.
"When Hard Road was released in April 74', Stevie spent many days at Alberts' King Street office doing phone interviews with hundreds of radio stations and newspapers around the country. His comeback was greeted with enthusiasm throughout the industry and 'Evie' was added to more and more radio station play lists. To everyone 's surprise, several stations actually played the entire 11-minutes. As George Young had predicted, the softer stations were happy to play Part Two.
. 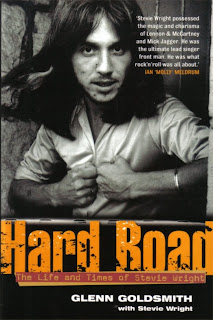 The Stevie Wright Band set off on a tour to promote the release of Hard Road. In the citrus-growing towns of Mildura, the same town in which The Easybeats had suffered their first rip-off ten years pior, Stevie and his band caused havoc and unexpectedly hit the headlines. According to a newspaper, the manager of the Sunland Motel saw the band members strip down to their jocks and parade in front of an open window in front of about a hundred teenage girls outside. The fans stormed the hotel and that at one point all of the band's six rooms were full of girls.
Stevie had been so young during his career with The Easybeats that as his comeback and success with Hard Road grew in Australia, he was able to engender himself to a new wave of young and hungry rock and roll fans. He was still only twenty-five. Much of his new fan base had little idea of who The Easybeats even were!"
'Evie' had reached number one in July and would remain in the charts for twenty-five weeks, making it one of the longest-charting singles in Australian history. The album Hard Road would peak at number five nationally and number one in Melbourne. Everyone at Alberts had hoped for a successful release, but no one predicted such a huge result. Sales were pushed along by an unrelenting touring schedule, much to the direction of Stevie's manager at the time Michael Chugg. [Extract from Hard Road by Goldsmith].
.
George Young’s brothers Angus Young and Malcolm Young went on to form AC/DC, for whom a couple of Steve Wright Band drummers also played.
The Easybeats reformed for a brief Australian tour in 1986, and Wright re-formed variations on the Stevie Wright Band during 1986-92.
In later years he suffered debilitating drug and alcohol problems which were further exacerbated by his self-admission to the notorious Chelmsford Private Hospital in Sydney; director Dr Harry Bailey administered a highly controversial treatment known as "deep sleep therapy" which allegedly cured drug addiction with a combination of drug-induced coma and electroshock. Many patients, including Wright, suffered brain damage and lifelong after-effects. The scandal was later exposed, but Bailey avoided prosecution by committing suicide. Stevie’s substance abuse problems spiralled out of control in the 1980s and ’90s and he came close to death on several occasions, but was pulled back from the brink by his wife Faye and by 2002 was well enough to perform as part of the all-star "Long Way To The Top" national concert tour. His biography, 'Hard Road' written by Glenn Goldsmith, was published in 2004 and is an excellent insight into what caused Stevie's downfall from stardom and how he currently lives from day to day with his drug / alcohol addiction.
Wright’s meteoric rise and fall has made him a frequent media topic and he has been the subject of at least one book . Born in Leeds, United Kingdom, Stevie Wright currently lives in Narooma (rural NSW) with his wife Faye.
On August 11 2006, Wright performed live at the Civic Hotel in the Perth suburb of Inglewood. His set consisted of five Easybeats songs and Part 2 of Evie. Some who attended say the gig wasn’t the most polished of performances but one had to give Wright full marks just for attempting the long journey to Perth and performing.
On February 10 2007, Stevie performed with Phil Emmanuel on Australia’s Gold Coast, in a concert celebrating blues music. [Extract from http://www.legendsofrockfestival.com.au/]
.
Rip was taken from CD at 320kps and includes full album artwork plus a bonus live track of Evie recorded at the Concert Of The Decade in 1979. I have also done a hot link for a YouTube clip of Stevie Wright performing Evie on 'Hey Hey It's Saturday' T.V show.
.
Track Listing 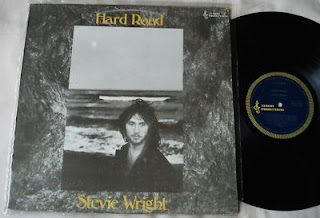