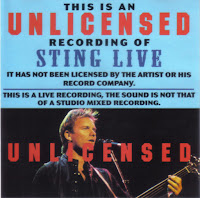 Gordon Matthew Thomas Sumner CBE (born 2 October 1951 in Wallsend, Newcastle upon Tyne, England), known by his stage name Sting, is an English musician, singer-songwriter, multi-instrumentalist, activist, actor and philanthropist. Prior to starting his solo career, he was the principal songwriter, lead singer and bassist for the rock band The Police. Throughout his career, Sting has incorporated distinct elements of jazz, reggae, classical, New Age, and world beat into his music.

His first solo album, 1985's The Dream of the Blue Turtles, featured jazz musicians including Kenny Kirkland, Darryl Jones, Omar Hakim and Branford Marsalis. It included the hit singles "If You Love Somebody Set Them Free", "Fortress Around Your Heart", "Love Is the Seventh Wave", and "Russians", the latter of which was based on a theme from the Lieutenant Kijé Suite, and became his first #1 solo hit. 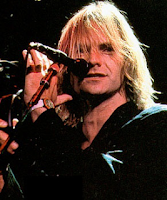 This post features an excellent soundboard recording made during his 1987-88 "Nothing From The Sun Tour" while playing at the Verona Arena, Italy on May 6th, 1988. The following is a review of the concert:

Concert Review
In a two-hour concert that delivered as much as he promised when he said ''Tonight's show is going to be a little long,'' Sting and band enthralled a sold-out crowd at the Arena Amphitheatre in Verona last night. It's amazing what a live show can do for recorded material. Nothing sounded stale. Early in this 'Nothing Like the Sun' tour (the title is from Shakespeare, clod), the band is having a ball.

Sting, in white linen jacket and no shirt, led off with 'Lazarus Heart' and 'We'll Be Together'. The show relied little on show and a lot on musicianship, although Sting knows the impression he makes.
Yes, being a well-dressed rock star. He loves it, he does. He climbed to the top of backstage risers and sat down. He waved. He waggled his fingers in a come-on to encourage more applause. He conducted the band. He presented beautiful profiles. He talked to the audience.
Besides charm and a voice that flies, Sting has the musical sense to pick excellent musicians for these orchestrally fat forays to the public: Tracy Wormworth, bass; Branford Marsalis, saxophone; Kenny Kirkland, keyboards; Delmar Brown, keyboards; Jeff Campbell, guitar; Mino Cinelu, percussion; and newly appointed Jean-Paul Ceccarelli on drums.

Kirkland and Marsalis, the only two holdovers from the last tour, led the flawless band through Sting's most recent compositions and gave life to the mostly stiff and lifeless album. The concert was full of surprises and bursts of instrumentation, spots of musical influences from jazz to popular song, and it was propelled by Cinelu's seductive and musical percussion.

'Englishman in New York', a theatrical little ditty that shows Sting's best songwriting abilities, segued into 'Sister Moon', which was languid. Not even languidness can shut up a rock crowd.
For 'Straight to My Heart', the former schoolteacher explained 7/4 time to his audience, and the band delivered it precisely. Kirkland had a great time. Marsalis was busy making bullfight music on soprano sax. 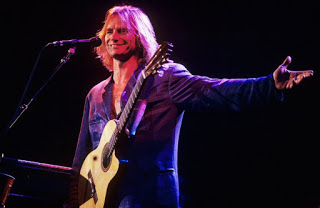 'Consider Me Gone' had keyboardist Brown, whose voice is surprisingly like Sting's, double-time scat singing his own high synthesizer notes. Brown was a dreadlocked jack-in-the-box. When he wasn't marching at the keyboard, he was popping up and down with glee.

'Rock Steady' was a nice bluesy tune about Noah. The reggae 'One World is Enough' walked into rock and ended in an exuberant twist. One of the prettiest songs, 'Fragile' led - with acoustic guitar by Sting - into Gil Evans' arrangement of  "Little Wing'" Campbell's Hendrix-like guitar reached out but didn't quite make it, though.
Slow spots had songs leading into overextended instrumentals. 'They Dance Alone', an anthem to the wives, mothers, sisters and daughters of Argentinian political desaparecidos, would have had more tingle if it hadn't led the second set. 'Still My Beating Heart' was boring except for the funky chorus. Encores brought 'Fortress Around Your Heart' and 'Don't Stand So Close to Me', during which Sting took his jacket off and revealed the best arms in rock'n'roll. 'Every Breathe You Take' and 'Message in a Bottle' ended the show.

Sting has loosened up and gone shopping. He had a world of musical ideas on his shopping list.
. 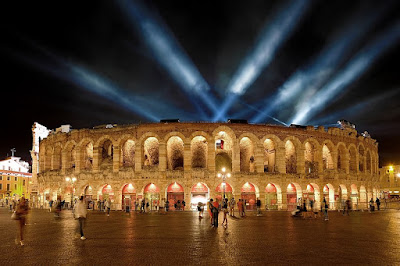 Verona Arena
The Verona Arena is a Roman amphitheatre in Piazza Bra in Verona, Italy built in the first century. It is still in use today and is internationally famous for the large-scale opera performances given there. It is one of the best preserved ancient structures of its kind. In ancient times, the arena's capacity was nearly 30,000 people. The stage for concerts and opera performances decreases the available places to a maximum of 15,000. It will be used as the closing ceremony for the 2026 Winter Olympics in Milan and Cortina d'Ampezzo. 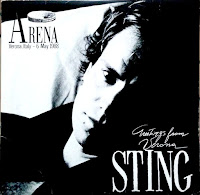 This post consists of FLACs ripped from my AMCOS CD Bootleg and comes with full album artwork. This recording is top notch and definitively came straight from the board, however it is only the second half of the concert (see full setlist). Other bootleg releases (ie. 'Greetings From Verona' and 'Message from Verona') are double CD sets due to the 2 hour setlist, however the quality of the first half of the concert is poor in comparison.  The only regret is that the 'Police' encore songs are not included here and that Sting did not sing "Roxanne" on the night.
.
Track Listing
01 They Dance Alone 10:53 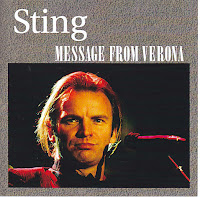