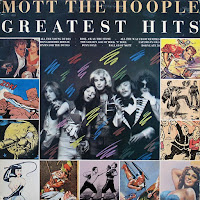 One of the major injustices in the past ten years of rock history is that Mott the Hoople never attained stardom. God knows they deserved it, and they certainly tried hard for it. Formed in the mid-sixties by Alien and Ralphs, the original Hoople crew consisted of Alien, Ralphs, Griffen, Watts, and vocalist Stan Tip-pens, who would shortly become their road manager before progressing to manager. Stan's on-again off-again vocal condition led the Hoople to audition new lead singers. At this point, long-time folkie lan Hunter showed up, a Dylanesque composer-guitarist who could honestly be described as a "croaker" as opposed to a singer. Hunter's raspy ramblings, however, struck a responsive chord within the group. He joined in '69, signalling the beginning of one of the most turbulent band careers in rock. 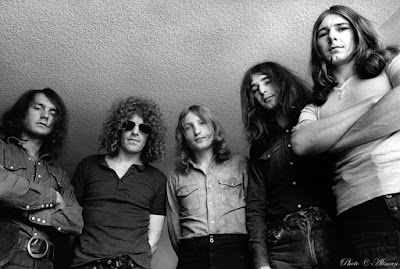 Producer Guy Stevens ushered the band into the studio and cut a series of quickly recorded, though classic, albums. MOTT THE HOOPLE, MAD SHADOWS, WILDLIFE, and BRAIN CAPERS quickly established the band as a schizoid, critically acclaimed troupe. However, on the sales level, Mott was the pits. This lack of sales, plus the constant vying between styles (Hunter's writing was a good 180 degrees away from Ralph's style) within the band, led to problems. In 1972, the group fragmented, but was brought back together by David Bowie, who produced the classic ALL THE YOUNG DUDES LP. The boys now had a new producer and a new label (Columbia replacing Atlantic).

A new Mott was sculpted from the glitter and glam prevailing in the early seventies. Hunter became the leader. Verden Alien left shortly thereafter. Bowie departed as a producer and Ralphs left the fold to form Bad Company in the middle of recording MOTT. Although Mott was certainly proving more successful on Columbia than they were in the old days, they were anything but superstars. Single after single stiffed in the States and Mott was growing frustrated.

Despite their rather tentative position in the rock pop polls, the band planned a coast-to-coast blowout of a tour for '73. Enlisting the aid of former Spooky Tooth guitarist Luthor Grosvenor (who, dressed in his Dale Arden stage costumes, called himself Ariel Bender), Mott the Hoople (regular blokes who liked a good drink every now and then) donned their best glitter costumes and, armed with oversized puppets, robots, flash powder, and dancing dolls, embarked on a killer tour. Although augmented by the excellent keyboard work of Morgan Fisher, the Mott the Hoople killer tour found Mott portraying the killee. 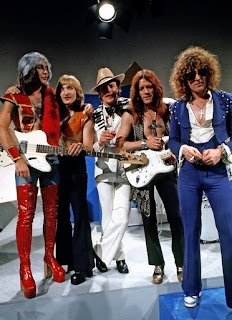 The outrageous stage antics detracted from the musical clout somewhat and negated any possible monetary profit. Several of the band members were clearly uncomfortable in their platform heels and Ariel Bender just didn't fit in on guitar. Soon Ariel was in the void and Mick Ronson was indoctrinated into the Mott realm of lunacy. The arrival of another dominant personality was too much for the group to bear. Although the band consistently performed exceedingly well on record during this somewhat erratic period, their personal lives were in turmoil.

Hunter left the band, entering a hospital after a stateside bout with total exhaustion. Ronson departed for an ill-fated solo career, and the remaining members of the band regrouped with newcomers Majors and Benjamin as simply Mott. The group got off to a shaky start but quickly picked up steam with albums SHOUTING AND POINTING and DRIVE ON. Hunter embarked on a critically acclaimed but commercially disastrous solo career. He was dropped by his label in 1977, as was Mott, who also severed ties with lead singer Benjamin. [extract from Lillian Roxon's Rock Encyclopedia, Angus and Robertson, 1978. p359-360]
.
Reviews
Mott the Hoople/Greatest Hits suffers a bit because this band, whose "Tales of the Near Great" stories made them sentimental favorites, produced only two albums of real worth after they moved from Atlantic to Columbia. One sees the breakdown of the group following the departure of guitarist Mick Ralphs in the terribly ill-fitting and annoying lead guitar work of Ariel Bender. Still, such gems as "All the Way from Memphis," along with a different take of "Roll Away the Stone" and two previously unheard cuts, "Foxy Foxy" and "Saturday Gigs," give this absorbing group a belated last testament.
- Billy Altman, Rolling Stone, 1-13-77. 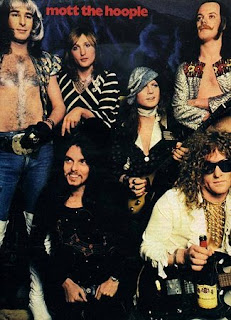 Now reorganized with new key personnel, Mott recalls its most successful period with writer/singer Ian Hunter on this collection. With David Bowie's song and production on "All The Young Dudes," the group came to stand for glitter rock. But its sound only took on glitter after mastering the elements of basic rock excitement. Best cuts: "All The Young Dudes," "All The Way From Memphis," "Roll Away The Stone."  - Billboard, 1976.

Hits my ass. Never heard "Foxy Foxy" on the radio, and never want to. But the other new one, "Saturday Gigs," recapitulates quite movingly a banal theme this collection fleshes out with real wallop: a band and its fans. Four songs is too much overlap with 1973's Mott, but this is the essence of Mott the Hoople as a group, which always needed Ian Hunter and always did more than back him up.   - Robert Christgau, Christgau's Record Guide, 1981. 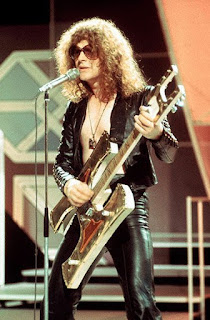 Mott is a bit of an anomaly. They began their existence as a hard rock band, but with the addition of Ian Hunter as lead singer and principal writer, they took on a Dylanesque coloration. However, it was their affiliation with David Bowie during his early-Seventies glitter period that provided them with "All the Young Dudes," a song that catapulted them to brief fame. Consummate borrowers from their better- and lesser-known rock brethren, Mott melded disparate elements into a dynamic, often humorous, sound that combined the bombast of early heavy metal with Seventies glitter, and just about everything else you or they could think of. In retrospect, Mott was a more potent band than originally perceived. Greatest Hits is a reasonable sampler, but is inferior to both All the Young Dudes and Mott. As an overview, thirty-eight minutes isn't long enough; too much quality material is omitted, such as "Ready For Love," "Sea Diver," and "Sweet Jane."  - Bill Shapiro, Rock & Roll Review: A Guide to Good Rock, 1991.
.
This post consists of FLACs and MP3's (320kps) ripped from my English vinyl pressing, and also comes with full album artwork and label scans.  Although the collection covers 6 years of the Hoople's recording career, there are a few essential tracks missing, namely "Sweet Jane", "One Of The Boys" and "Sucker", and so I have included these tracks as Bonus Tracks.
.
Track Listing 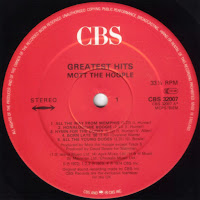 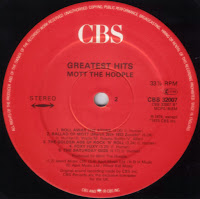