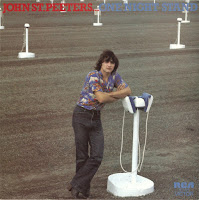 John grew up in Milan, Italy where he studied music and the piano from the age of eight. He migrated to Australia with his family arid they settled in Melbourne.
In his early teens he began appearing in talent quests as Johnny Lo Piccolo, playing the piano accordion, but as he grew older his music preferences changed. He later joined forces with two girl singers and they performed as John St. Peeters and the Sharrells. Then in 1974, he toured Canada, the US and South East Asia and in Djakarta he even hosted his own TV show.
Back in Australia he recorded a single for Crystal Clear called "You Know That You're Sexy" which made the charts in November, 1976.

Then in April, 1977 he moved to EMI Records and three months later he released his first single for the label, "Shiny Side Up". The song had been written by Mick Flynne (ex-Mixtures), who was back in Australia as Pussyfoot's protege and had been impressed by one of John's performances. Later in the year John released a follow up, "Fadin' Away", and was voted Most Popular New Talent in the TV Week Pop Awards. 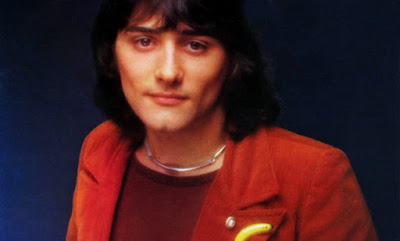 John rounded off 1977 with another single entitled "Love The Way You Move" and was voted ‘Most Popular New Talent’ at the TV Week King Of Pop Awards. [extract from Australian Encyclopedia of Rock: By Noel McGrath.  Outback Press, 1978 p275] 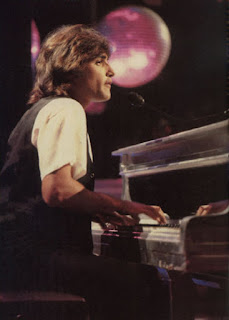 For John, 1978 was a formative year making a change of direction from a rock style to more sophisticated pop. Midway through the year, he switched from Crystal Clear to RCA. His debut single for the label was "Deep Inside Of Me" (which he wrote himself), backed by "Every Step Of The Way", and peaked at No. 22. on the Australian Charts. Spencer Lee, who has worked overseas with top acts including Neil Sedaka,  produced the record at his own studio (United Sound Studios) in Sydney. The single provided John with his biggest hit to date. According to Australian musicologist, Ian McFarlane, "By that stage, [the singer] had established himself as Australia's version of David Essex, with his good looks and sophisticated pop releases."

He  continued working with Spencer and, by November, they had completed an album scheduled for release early in 1979. (A follow-up single, "High Class Woman", issued before Christmas '78, was charting nationally by the end of December, reaching the Top 50
John formed his own band late in '78 and in November began touring, appearing mainly in clubs.

He followed with his debut album, 'So Many Ways' (1978), produced by Spencer Lee. In 1979 he formed the John St Peeters Band and toured the Australia club circuit. Its title track was issued as a single in April, which peaked at No. 13, and was also co-written by St.Peeters and Lennard. His second album, 'One Night Stand', and its associated singles unfortunately did not reach the top 40, which is a shame as I think it is a great album, and featured his biggest hit "Wonder World".
[extract from Australian Encyclopedia of Rock (1978-79 Yearbook): By Noel McGrath.  Outback Press, 1979 p335-336]


He appeared on teen pop music TV show, Countdown, from 1976, he co-hosted an episode in June 1978. He later reflected "The biggest thrill of all, though, was making it on the biggest television music show that existed during those years — Countdown, hosted by Molly Meldrum. What a fantastic experience that was." He premiered his single, "Wonder World", on the show in March 2nd 1980; and was the theme song for Simon Townsend's Wonder World, a children's variety TV series. Simon Townsend's Wonder World was a multi-award Australian children's television show that aired on Network Ten from 1979 to 1988.  John St.Peeter's Wonder World was heard 5 days a week during this period, amounting to over 2000 episodes and won 5 Logie Awards's. 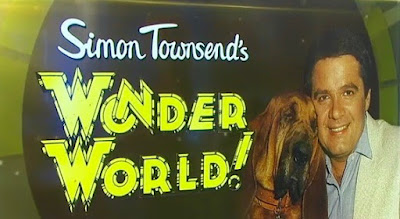 An interview with Simon revealed that the song was commissioned (written) for the show after Simon discovered the original theme "Afternoon delight" was about sex.? He was also the guest host on another pop music show, Sounds.

In January 1981. St.Peeters was touted as the host of a pilot episode of a pop music series for the Willard King Organisation.  He told Clay Adams of The Australian Women's Weekly, "I should hear shortly whether or not it will go ahead and if I'll be in the hot seat. Personally I hope the show does receive the okay as Australian television needs another pop music show at the moment."  From March to May 1984 and from February to April 1985 he was the host of The John St Peeters Show on TV's Channel 0/28.

After the mid-1980s, St Peeters concentrated on club appearances and corporate events.
For a complete run down on his musical career, the following YouTube clip is well worth a look.
John St.Peeters 60th Birthday Tribute 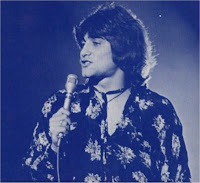 Feature Article - John St.Peeters
(Countdown Annual 1980)
A true veteran of the music industry at the age of twenty-three, John St.Peeters has been through every change in modern rock 'n' roll and managed to stay abreast - sometimes ahead - of most of them.
The age of Twenty- three ? Well, most people don't believe him, and that's understandable. After all, he has been part of Australia's music scene for fifteen years.
"I started when I was seven and I made my first appearance when I was eight", he said after compering an edition of Countdown. "Now I usually have to produce my driver's license  to prove my age to people. I'm like all those kids who started on Young Talent Time. Everyone think's they must be thirty or thirty-five because they've been around so long, but most of them are only early twenties".
A singer, songwriter and multi-instrumentalist, John St.Peeters has maintained the enthusiasm to keep stretching his talent. And he has achieved results in overseas countries such as South Africa which would be the envy of many of his peers. His Countdown appearance in July (1980), in fact was squeezed in between two tours of South Africa. 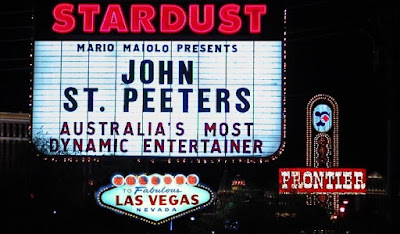 "We were over there for four weeks and they wanted us to stay on, but the last album 'One Night Stand' was due out in Australia so we had to reshuffle everything to be home when it was released", he said. "I actually did the single 'Love Is All We Need' as far back as last September when I was touring in Australia with Tina Turner. Her backing band worked on it with me. 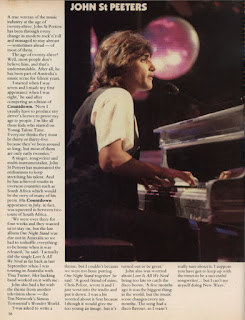 John also had a hit with the theme from another television show - the Ten Network's Simon Townsend's Wonder World. I was asked to write a theme, but I couldn't because we were too busy putting 'One Night Stand' together" he said. "A good friend of mine, Chris Pelcer, wrote it and I just went into the studio and I put it down. I was a bit worried about it first because I thought it would give me too young an image, but it turned out to be great".

John also was worried about "Love Is All We Need" being too late to catch the disco boom. "A few months ago it was the biggest thing in the world, but the music scene changes every six months. The song had a disco flavour, so I wasn't really sure about it. I suppose you have got to keep up with the times to be a successful songwriter - but I can't see myself doing New Wave !". 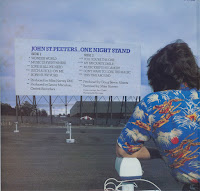 This post consists of FLACs ripped from my vinyl copy, sourced at a local flee market held every Sunday Morning at the Coburg Drive Inn (Melbourne).  There is a huge coincidence with this find, as the cover photography on this album depicts John St.Peeters at the very same Drive Inn where I found this album. The back cover shot (see right) with a building in the background matches the surrounding area at the Coburg Drive Inn, although the tree line has grown considerably over the past 39 years.    How eerie is that !
As usual, full album artwork along with label scans and associated photos are included. Hope you enjoy the show.
.
Tracklist 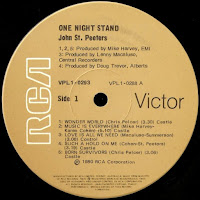