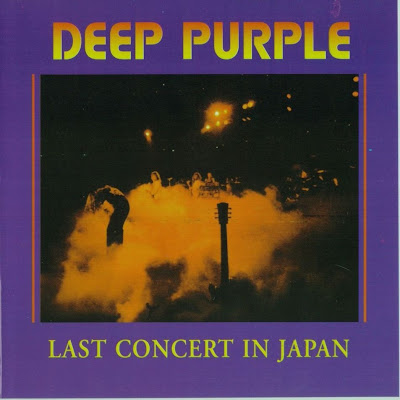 This album by Deep Purple was released in March 1977. It records the last Japanese concert of the Mark IV-lineup with Tommy Bolin. This album was recorded on December 15, 1975 at the Tokyo Budokan and was dedicated to Tommy Bolin. Tommy" Bolin was an American-born guitarist who played with Zephyr (from 1969 to 1971), The James Gang (from 1973 through 1974), Deep Purple (from 1975 to 1976), in addition to doing solo work.
In 1975, Bolin released his first solo record, 'Teaser' and plays on Deep Purple's 'Come Taste the Band'. In 1976 he released Private Eyes, his second solo record. The solo work on the songs "Post Toastie", "Shake the Devil" and "Bustin Up for Rosie" showcase his extraordinary skills. Tommy was diverse in his talents, and did not need to play a solo for every song, instead choosing to highlight the song instead of the guitar. He is a perfect example of a guitarist who does not overdo it, knows when to burn up the fretboard, and when to tame 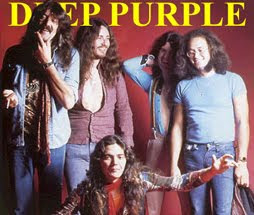 it down.
He was found dead from a heroin overdose on December 4, 1976 in Miami, Florida, (the day after opening a show for Jeff Beck), at the age of 25
This album's only real redeeming features are the live versions of "Wild Dogs" and "Soldier Of Fortune" which are not officially available anywhere else. I wouldn't really recommended this album for the casual fan, rather try On 'The Wings Of A Russian Foxbat', when Tommy was in much better form. The song order has been moved around for some obscure reason. See the actual set list below for comparison. One nice thing about this rip is that it has been taken from a Japanese Pressing, so the sound quality is nice and sharp and should sound better than the average pressing.
.
Actual full set list was:
01. Burn
02. Lady Luck
03. Love Child
04. Gettin' Tighter
05. Smoke On The Water
06. Wild Dogs
07. I Need Love
08. Soldier Of Fortune
09. Organ Solo/Woman From Tokyo
10. Lazy (including a Drum Solo from Ian Paice)
11. This Time Around / Owed to G
12. Tommy Bolin Solo
13. Drifter
14. You Keep On Moving
15. Stormbringer
16. Highway Star
. 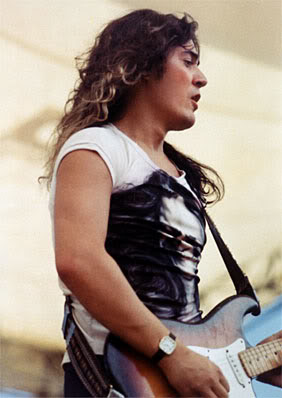 Review
I have witnessed many, many live performances from these guys, featuring as early concerts from mark II in 1973. This one was the last Mark IV concert in Japan. There are two versions for this live album. A short version called " Last Concert In Japan" which is the one we are talking about here and an extended one called "This Time Around" (see track listing above).
I can certainly recommend you this shortened one: it displayed less solos and average tracks than the expanded version.
Great tracks such as "Burn" and "You Keep On Moving" are the best that you can expect from this Mark IV live album. The Bolin song "Wild Dogs" is not bad at all, but can't compete with the great and earlier Purple Marks.
Effective and rhythmic version of "Smoke On The Water" is not bad at all. Even if the genuine live versions with Gillan are better (at least the great "In Concert at The BBC", this one is quite good by all means. What I don't like is that some songs are quite emasculated like "Woman From Tokyo". But the band has slowly trained their fans to this "feature": either extended versions of original tracks ("Space Truckin" for instance) or cut down versions like this one.
None of them are of my liking. This one is just a showcase for Jon Lord and is purely instrumental.
Unlike Mark II, "Highway Star" was now mostly closing their concerts. As I have already written some times, this is one of my top three Purple favorites. This Hughes/Coverdale version is rather average.
In all, this short version of the "last" concerts in Japan is quite satisfactory and of better quality than the longer counterpart, but I wouldn't recommend this album to Purple newbies. [review by ZowieZiggy, Progarchives.com 2010]
.
Japanese Pressings 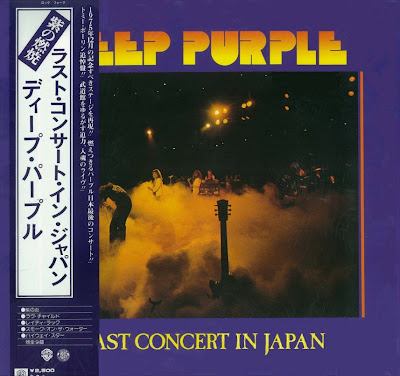 Japanese vinyl releases are premium quality pressings, much sought after by audiophiles and collectors alike. In the 1960s Toshiba pioneered top quality red vinyl pressings using their trademark 'Ever-Clean' process this utilised a special ingredient intended to prevent the build-up of static electricity on the vinyl. Japanese pressings are synonymous with quality - the vinyl shines like no other vinyl - everything about their releases feels special. When US audiophile label Mobile Fidelity Sound Lab first released their series of high quality pressings the records were manufactured in Japan. The sonic quality of Japanese pressings is considered to be among the best in the world and, in addition, they are beautifully presented, their covers usually printed on better quality heavy stock paper and often including a bonus lyric insert with dual language Japanese & English text. Nearly all Japanese LPs were issued with an 'obi' - literally translated this means 'sash' and is derived from the obi (sash) worn around the traditional kimono dress. This delicate paper strip, usually wrapped around the left side of the album cover, often contains marketing information and album content details, all printed in Japanese kanji and ~kana script. Obi designs can be as varied as the LPs they adorn, and some series of obi designs can be as collectable as the artists albums they decorate. 'Hankake' (3/4 l 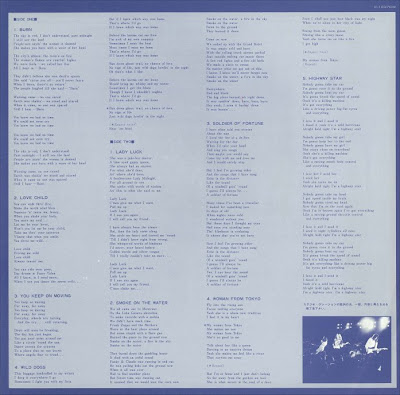 ength obis) are nearly impossible to find, and the 'Rock Age' series of obis are especially rare and valuable. Obis make a unique, attractive addition to the overall package and are becoming increasingly rare, especially on LPs from the 1960s and 70s. Their delicate and disposable nature meant that very early obis were routinely discarded, so that n

ow they can often be worth several times more than the record they accompany. In addition to Japanese pressings of regular albums there are numerous Japanese-only releases. Labels and artists often issued exclusive records timed to coincide with their Far East tour, or they re-released back catalogue albums with a re-designed obi, displaying revised graphics and other consumer information. Regardless of your musical taste, Japanese records make a stunning addition to any collection. Audibly and visually they present the collector with a feast of delights. Genuine mint condition records, complete with inserts and obi, are becoming rarer every day. Whatever the digital age throws at you there is still a valid opinion that says vinyl sounds best; with Japanese records you get top quality pressings, a tactile picture sleeve that looks stunning and you can sing along from the lyric insert (example above)
.
This post contains a rip (mp3 at 320kps) taken from my Japanese almost mint vinyl LP. I have also added 4 bonus tracks taken from an extended CD version of this concert. Full album artwork is included 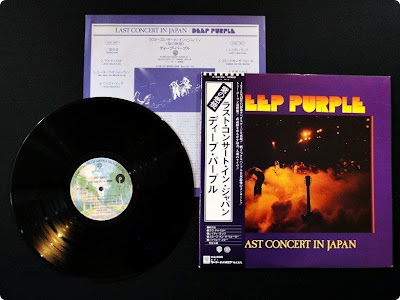