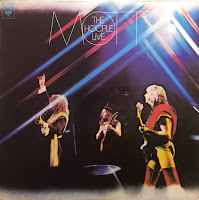 Mott The Hoople were always a crash-hot live band, and it took a while for technology to finally catch up and capture their live show. These performances go some way to redressing the balance, but are let down by other considerations.

CBS refused to release a double album, or even consider a "bonus" mini-LP (10-inch), so these magnificent performances were edited down to fit on a single LP. They also refused to allow any Hoople tracks to be included, which certainly affected the track selection of the Uris side, which were also presented out of real-time sequence for programming considerations. At over 50 minutes, it was still quite a long LP for 1974.

Although there are fans who do not like guitarist Ariel Bender's Ted Nugent-style noise making, this reviewer regards this as one of the best live albums ever made. While the Hammersmith performance included here captures that intangible "expect the unexpected" essence of the true live gig, there was always the feeling that the Broadway (Uris) side had something missing - tracks that have since surfaced suggest that the best tracks were left in the can. The Uris show was recorded by the syndicated radio show King Biscuit Flower Hour who recorded the second night (8th May 1974) of a week-long run, and about half an hour was originally broadcast back in 1974. This show was re-broadcast in 1988, and a few transcription CDs found their way into the collector's market. The following tracks were broadcast: American Pie/Golden Age of Rock 'n' Roll, Sucker, Born Late '58, One of the Boys, Marionette and All the Way From Memphis. The original master-tape was mixed in quadrophonic, and this (1988) broadcast sounds like one track front and one track rear from a quad master - there is an odd delay between the stereo channels.

There was another (20 minute) broadcast in 1989, and this found its way onto the Long Red unofficial release. The tracks broadcast this time were American Pie/Golden Age of Rock 'n' Roll, One of the Boys, Marionette and All the Way From Memphis. This time, it seems, they took the correct tracks off the master.

A couple of rarities from these shows have surfaced over the years. The 1980 compilation Shades of Ian Hunter included a live performance of Marionette from Uris. Sadly, it seems to have been mixed by someone less than familiar with Mott's work - all the power and majesty of the live performance has been lost. This reviewer much prefers the mix available on the aforementioned Long Red disc. 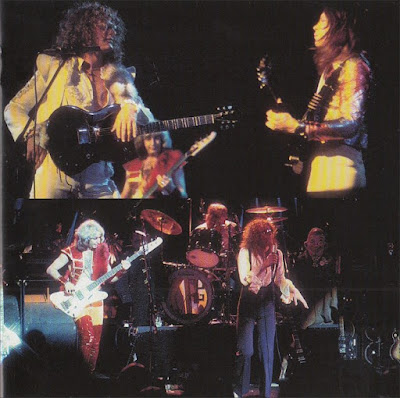 Another rarity from these performances surfaced in 1987. Castle's The Collection featured the full ten-minute version of Walkin' With a Mountain, complete with all the solos which were edited out of the official live album. It's not on the CD version - this was on the 2-LP version only. Who says vinyl is dead?!

In 1998, of course, we had the excellent 3-CD Anthology, which included American Pie/Golden Age of Rock n Roll and Roll Away The Stone/Sweet Jane, together with the Blowin' In The Wind coda to Hymn For The Dudes. 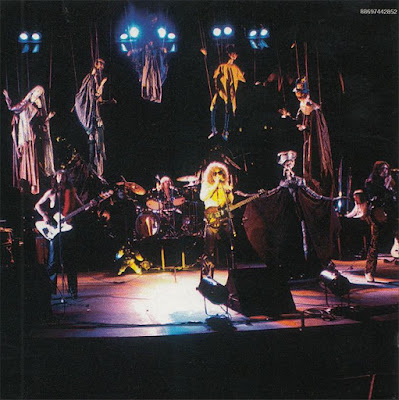 The CD packaging is OK (same as the LP), except that the date of the Uris performance is given erroneously as 1975. In addition, the date given on the original vinyl (7th May 1974) was that of the show reviewed in Creem, not the recording date. Sound quality of the CD is average.

It is a shame that CBS have yet to take advantage of the CD format and re-issue CD with additional material. The rarities I've mentioned above prove the material is there (and strong) for an extended CD of the Uris show, and I'm sure the same must be true of the Hammersmith show. [extract from hunter-mott.com] 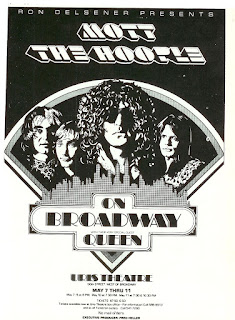 Broadway Show (Side A)
May 7, 1974. All the way from nowhere to the Uris Theatre in New York, where the ghost of Broadway tradition exchanged its top hat & tails for a pair of shades and a week long electric seizure. To my thinking, there could've been no better rock & roll band to open up Broadway's belly than Mott The Hoople. They earned the right to that much frosting on the cake with five years of diligently rendered services. And they further earned it by virtue and the fact that they could look all the pomp and circumstance full in the face and still giggle about it over in the corner: "Is That Really us?"
In retrospect, however, the Broadway aspect opf the situation comes up an also-ran; just another entry for Mr Guiness to note and file away. The deck was stacked with pop aristocracy on opening night, but the event was the string of performances that most of the gentry didn't bother to stick around for Nights when the people who'd been along for most of all of the ride could get down to the real celebration. 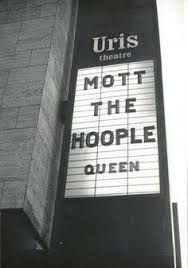 What was to celebrate? Five full years of ups, downs and somewhere-in-betweens that might be the story of any rock & roll band. But Mott the Hoople has not been just any rock & roll band. They may well be the consummate illustration of the old 'Do it yourself" principal of rock & roll: blue collar sensibilities and a mouth that actually works. Which meant that from the beginning Mott was always somehow nor special than any of the one-night superstars who measured their successes in the number of miles they could put between themselves and their audience.

Without any commensurate energy feedback from their audience, Mott's story would probably have lasted five minutes rather than five years. As you'll hear on these tales of two cities, the circuits were overloaded from both ends of the line, and this kind of artist-audience crossfire is about the closest you can come to a blueprint for rock & roll magic. It burns as brightly on "All The Way From Memphis" as it does on "Rock & Roll Queen" which says to me that this celebration is not of the past but the future.

Nothing stops here, least of all the changes, but one thing is certain the best is still ahead of us.
Now that's something worth celebrating! [Ben Edmonds - CREEM Magazine, October 1974] 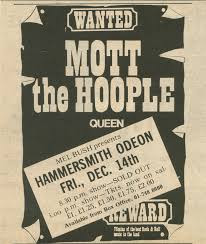 Hammersmith Show (Side B)
Mott The Hoople returned to London with a sensational show that puts them right back amongst the swashbuckling few who close their shows with pandemonium, fighting on stage and all the makings of a genuine riot, though in keeping with the Christmas generosity everything seemed to be smoothed out quickly afterwards and the group and the stewards and the hall manager, who had seemed on the brink of fisticuffs with each other at the end of the show, were later drinking amicably together.
The aggro started during the encore. Mott were just battering their way through a brutal, aggressive version of "Walking with a Mountain" with the regular crowd milling away upfront, when the Safety Curtain started to drop and a grey-suited gentleman who looked like the hall manager started purposely towards centre-stage, where Ian Hunter abd Ariel Bender were letting it all hang out for the benefit of the audience.

Stan Tippins, the group's road manager, remonstrated with him and was eventually compelled to propel him out of view, but in the meantime the curtain had sunk to shoulder height, and Stan, giving up his wild gestures at the band to pack the show in and call it a day. This mind you was the second house, thrust a burly shoulder under the curtain.
Roadies pored on stage to aid him, Hunter and Bender sounding as if they would play for ever were wailing and roaring away and ducked under and advanced up a cat-walk bridging the orchestra pit. The lieutenants took this as the signal to advance, and with the energies of the stewards divided, swarmed over the cat-walk, the pit, mingling with photographers, one actually breaking through to embrace Ian Hunter. 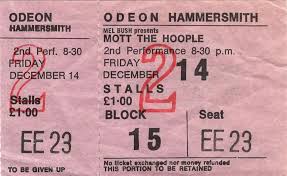 The situation got increasingly heated with punches being flung, fans hurled off the stage, and threats and imprecations hurled between Hunter, the stage crew and the theatre manager.
Apart from one girl whose leg was broken trying to climb a drainpipe into the dressing room, everything turned out OK and the post gig party went ahead as planned, with various celebrities standing around and congratulating the band, and for once Mott The Hoople were admitted to the party, which was all to the good as it was Buffin's wedding reception too.
He, his bride Paula and Stan Tippins were lurching around arm in arm and looking pleased with themselves, though their wedding cake, by some oversight, had not been supplied with a knife, with the result that most of it was used in bits as missiles, and eventually a well known photographer deposited it unceremoniously on the floor and jumped on it, to the applause and encouragement of several equally cynical and irresponsible parties. 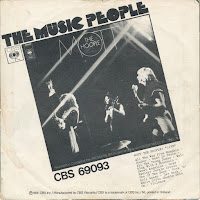 Mott delivered a set brightened by the genuine rush of adrenalin inspired by a real near riot. Not all their gigs are musically superb, but this was a real touch of the old Mott, the shambolic rebble-rousers. It's good that they're not falling into a cosy middle-age of success. It keeps you on the edge of your seat when you know such things can still blow up at a moment's notice. [Martin Hayman, Sounds Magazine Dec 1973]
.
This post consists of FLACs ripped from my treasured vinyl. Purchased in the mid 70's this album was my first introduction to Mott The Hoople and was played many a time at parties and in my many Uni abodes. Full album artwork and label scans are included.  It was interesting to note while researching for this post, that Queen were Mott's support act at the time.  If only those Mott fans new how lucky they were to be watching such an epic double live act, at that time.  Hind sight is a wonderful thing, hey !
So glam up ya stereo and turn the dial all the way to 10 - 'cause Mott The Hoople are back.
.
Tracklist 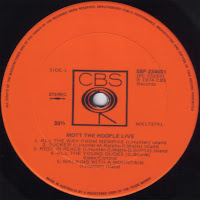 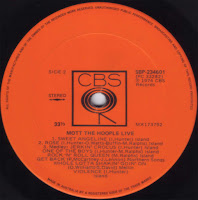