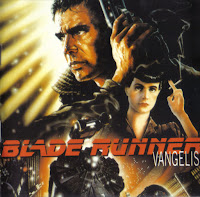 I decided to do a double post today, which focuses on my two favourite Vangelis's albums, both of which are soundtracks to movies.

Firstly, 'Blade Runner' which I saw at the movies when it first premiered in 1982 blew me away from the opening scene (where Harrison Ford is seen flying through the streets of L.A in a 'spinner') to the final credit listing at the end of the movie which features the sound of Acid Rain falling. And what about the lazy, haunting sax solo (by Dick Morrisey) in Love Theme, backed by Vangelis's superb electric piano and symphonic accompaniment. And of course, I like anything Sci-Fi based. 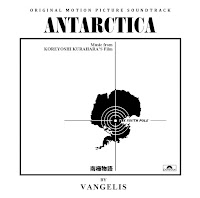 The second Soundtrack 'Antartica' took my interest more because I was working as a research assistant at the time at Melbourne University in 1982, for the Antartic Botantical Research dept.
It was was my dream to visit Mawson over the  summer period the following year, however the government pulled the pin on all scientific research at the end of 1982 (monies went into Mining instead), so I never did get there. So the closest I could get, was to see a newly released movie called Antarctica in 1983, which featured some amazing photography of this icy dessert landscape.
Of course it also featured a some awesome sound affects to enhance the visual experience, and was pleasantly surprised to learn during the credits, that Vangelis was once again behind this musical culinary delight.
.
Vangelis - Blade Runner (1982) 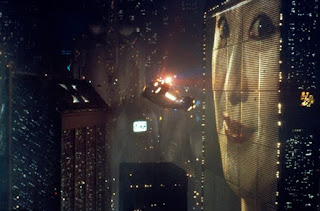 In the 21st century, a cyberpunk vision of the future is introduced, man has developed the technology to create replicants - humanoid androids with short, fixed lifespans - which are illegal on Earth but are used in the off-world colonies. In Los Angeles, 2019, Deckard (played by Harrison Ford) is a Blade Runner, a cop who specializes in terminating replicants.

As a failsafe, replicants were designed to have only a four-year life span to prevent them from having enough time to develop complex human emotions. These replicant mutineers, lead by Roy Batty (Rutger Hauer) return home to find their makers, hoping to find the key to extend their life span, in the remaining underworld where only misfits remain.

Deckard is forced to come out of retirement when these four replicants escape from an off-world colony and come to Earth. Before starting the job, Deckard goes to the Tyrell Corporation and he meets Rachel (Sean Young), a Replicant girl he falls in love with. The city in which Deckard must search for his prey is a huge, sprawling, bleak vision of the future. Man's obsession with creating a being equal to himself has back-fired. This film questions what it is to be human, and why life is so precious.


Vangelis’ soundtrack for Blade Runner remains one of the relatively few soundtracks to establish an enduring reputation as fine music in its own right. Vangelis, by mid-1981 when he was first invited to view a rough cut of footage from Blade Runner, was at the peak of his fame as a solo artist, following a half-decade long run of successful albums. On 29th March 1982, a month prior to submitting his compositions for Blade Runner, he would crown his career as a creator of movie soundtracks (which began as far back as 1963) by winning an Oscar for his work on Chariots Of Fire. His work on Blade Runner took place in the midst of a truly auspicious moment for the Greek composer, and he fully lived up to the expectations placed upon him. 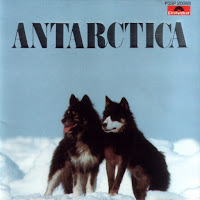 Vangelis - Antartica (1983)
Antarctica is a soundtrack album by the Greek electronic composer Vangelis, released in 1983. Vangelis had recently written music for Chariots of Fire and Blade Runner, before he released this haunting soundtrack. It is the score of the 1983 Japanese film Antarctica ("Nankyoku Monogatari", lit. "South Pole Story") directed by Koreyoshi Kurahara, and was nominated by the Japan Academy for "Best Music Score".

In 1958, a Japanese expedition to Antarctica led by meteorologist Kenjiro Ochi (Tsunehido Watase) and doctor Akira Ushioda (Ken Takakura) leave their exploration base, abandoning their loyal team of sled dogs. When the scientists who are supposed to replace them have their mission canceled, Akira and Kenjiro are worried their dogs will die. A year later, the scientists embark upon a dangerous expedition to rescue their faithful animal companions. 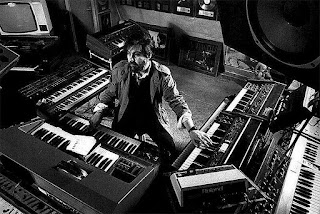 Synthesisers of "Theme from Antarctica" conjure cold and desolation, but also a bright landscape not lacking in beauty. "Antarctica Echoes" has minimal melody showing the vastness of the landscape. "Song of White" is cold-sounding, while "The Other Side of Antarctica" has a sinister sound. "Deliverance" is the theme that plays at the end of the film when the handlers on the first expedition
find corpses of seven dogs, that eight of the dogs broke loose, and two of the dogs, Taro and Jiro, return alive. [extract from Wikipedia] 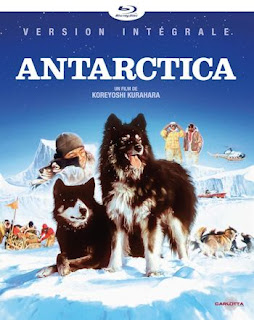 Review / Storyline
This 1983 soundtrack to the obscure and ultimately rather touching movie directed by Koreyoshi Kurahara (1927 – 2002) was only released world-wide some five years later. The film was apparently based on a true story and a big success in Japan at the time, where in 2001 it was released on a double DVD set that unfortunately lacks English subtitles. However, the story line is easy to follow and this movie is as much about that story as it is about the often breath-taking shots of Antarctica and its wildlife.

Across the opening titles we hear Life of Antarctica, a dramatic piece that uses sequencers, various layers of harmony and flute-sounds to set up an atmosphere of adversity. It is used for this purpose at a few points throughout the movie. The actual story develops as follows: about halfway through the film, a team of Japanese arctic explorers is forced to abandon camp due to extreme weather circumstances. Those circumstances make it impossible to take along the full complement of dogs, who are left behind chained to a rope. This is especially hard on their two caretakers, who had developed an emotional bond with the dogs, after having been saved from trouble by them during one of their treks across the continent. This trek, made by 3 men and the dogs pulling a sleigh across the icy mountains, provides the first opportunity for the music to fully play its part. A couple of short ambient non-album pieces are introduced here as periods of intense activity alternating with periods of rest plus shots like a beautiful sunset are accompanied by tracks such as Deliverance and Memory of Antarctica.

Of some 20 dogs left behind, 7 eventually manage to break free to start a long battle for survival. They initially bond together, but fatal events and various injuries make the group split up and become smaller and smaller. There are extended scenes showing the dogs trying to find food (frozen fish in the ice, the occasional bird), running across the ice (Kinematic) and witnessing some amazing sights.

One of those, the strange magnetic phenomenon of Aurora Australis (or Aurora Borealis, as it'd be called in Canada, where the film was mostly shot) has an ambient piece which would have been worthy of inclusion on the album. Some sad scenes show the dogs come to an end in different ways. Here the contemplative music of Antarctica Echoes and Memory of Antarctica is often used.

Meanwhile back in Japan the two caretakers keep wondering about the fate of their dogs and be depressed about their having been so powerless to do anything about it. When summer returns to the white continent, two dogs have somehow managed to survive the ordeal.

Eventually an opportunity comes along for the two men to return to the camp and at least put their minds at rest. As expected, they find most dogs dead but are then happily reunited with the two survivors to the majestic sounds of the Theme, which also covers the end-titles. That theme, the opening piece on the album, is a magnificently orchestrated blend of harmony and percussion. Its drawn-out melody is trademark Vangelis - using only a few notes and achieving harmonic resolution by the simplest of means it's got class written all over it due to its spacious arrangement. I've heard it being used for a TV-documentary about ocean sailing as well, it evokes that sort of feeling of heroism very well.The album's own overall effect is one of virtuosity, an inspired Vangelis at a high point in his musicianship.

There is some, but not much additional music and alternative versions in the movie that are not on the album, on the other hand none of the fully worked out pieces on the album are heard in their entirety in the movie.

This post consists of FLACs ripped from my 'mint / pristine' vinyl (both titles) and includes full album artwork for both Vinyl and CD formats.  The rip of Antarctica is particularly impressive, as my copy is a Japanese Pressing and it is well known fact that Japanese pressings are the best in the world, in terms of their quality (from cover to vinyl). I hope you enjoy these soundtracks as much as I do.
NB>  Another movie worth looking out for (with a similar story line to that of Antarctica) is called 'Eight Below' and although the soundtrack is not credited to Vangelis, you would be forgiven in thinking that it was. 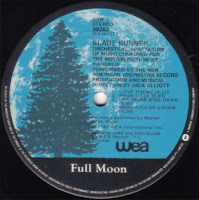 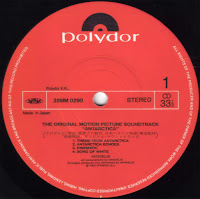 Personnel
Vangelis – composer of all instruments