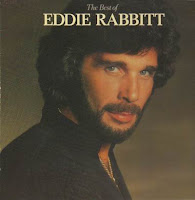 Eddie Rabbitt was one of the unsung pop-hybrid singer-songwriters who moved country music closer to a fusion with the pop and rock genres. The most successful country performer during the Urban Cowboy years, with a string of chart-topping singles, gold and platinum albums and sold-out tours, he shared a rare gift with Neil Diamond: the ability to make middle-of-the-road songs sound exciting. Like Diamond, he first gained prominence as a writer, Elvis’ Kentucky Rain and Ronnie Milsap’s Pure Love, being just two successful examples. Rabbitt’s songs profess love and romance as the common denominator and in the hits Suspicions, On Second Thought and I Love A Rainy Night he displayed a strong melodic sense with plenty of creative ideas to go with it. The classic honky-tonker, Two Dollars In The Jukebox, is one of those commercial jingles that tingles in your mind, a powerful mix of country music roots with a progressive approach. In comparison to Waylon, Willie, Hank Jnr., and his other contemporaries, Eddie’s songs were more gentle. He preferred a smooth, image-projecting style to the gut-wrenching bluntness of the Outlaws. 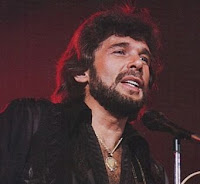 He continued to write for Presley and signed with Elektra Records in 1974 after writing Ronnie Milsap’s Pure Love. As a performer he overcame a somewhat thin and reedy voice by overdubbing himself in three-part harmonies, a process he called the ‘Eddie Rabbitt Chorale.’ After three charted singles, Rabbitt scored his first No. 1 with Drinkin’ My Baby (Off My Mind) in 1976. The hits soon came in a torrent: "I Love A Rainy Night", "Every Which Way But Loose" (from the Clint Eastwood movie of the same name), a duet with Crystal Gayle on "You And I", and the r&b influenced "Suspicions". At the peak of his career, in the early 1980s, he notched five No.1 singles in a row followed by a No.2 and two more No. 1s. That string included his "Drivin’ My Life Away", which was featured in the 1980 movie Roadie. 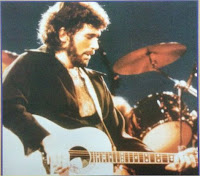 With his special brand of music he helped to blur the distinctions between country and pop songs, making the music more accessible. For a four-year period from 1978 through to 1982, he was outselling every other country act, including such heavyweights as Kenny Rogers, Willie Nelson, Waylon Jennings and Dolly Parton. Yet he did not pick up one major CMA award and seems destined to be overlooked in years to come when the history of country music is re-written and re-written by journalists who will decry his commercial success.  [extract from alancackett.com]

In 1997, Rabbitt signed with Intersound Records but was soon after diagnosed with lung cancer. Following a round of chemotherapy, he released the album Beatin' the Odds. Sadly, Rabbitt died on May 7, 1998, in Nashville from lung cancer at the age of 56. 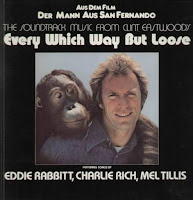 Every Which Way But Loose
Was the title song of the 1978 Clint Eastwood comedy. Although best known for uncompromising tough guy roles such as the cynical police inspector Dirty Harry, Eastwood could also play it for laughs. In this film, Eastwood plays Philo Beddoe, an easy-going trucker and a great fist-fighter.  With two friends - Orville, who promotes prize-fights for him, and Clyde, an Orangutan he won on a bet - he roams the San Fernando Valley in search of cold beer, country music and the occasional punch-up. But he is literally floored by a dainty little country and western singer, who gives him the slip when she realizes he's getting too serious. Phil, Clyde and Orville set off in pursuit, pestered by a bunch of wacky bikers. 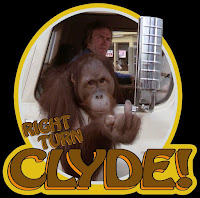 The bright new star of “Every Which Way but Loose” was the orangutan named Clyde, and he had quite a repertory. He could kiss human actors, smile bashfully and make obscene hand gestures. He could fling up his arms and fall over in a faint, in a game of bang-bang-you're dead. He could even steal scenes just at the right time - "Right hand turn Clyde" says Beddoe, and down go a dozen bikiers in a wonderful domino effect.

The title track was written over the phone in double quick time by Milton Brown, Steve Dorff and producer Snuff Garrett, even though they knew virtually nothing about the film. This appears to have been no obstacle at all because the team capture the spirit of the film's side plot, a romantic entanglement with a free spirited young woman who gets under Beddoe's skin. It was then that producer Garrett commenced his search for a suitable Country / Western singer to deliver the song, and Eddie Rabbitt got the gig.

After Rabbitt made a few changes to the song, it was released on the Elektra Label prior to the film's nationwide premiere.  In the week of Dec. 23, 1978, this song went straight into the Country chart at #18, the equal highest debut on the Hot Country Songs list, and remained as Rabbitt's most popular release.
.
This post consists of MP3 (320kps) ripped from my recently acquired vinyl which was still in mint condition, even after 40+ years.  I would like to say that I had found it on 8 Track format (see right), so typical of many Country & Western releases but not to be.
The associated Clint Eastwood movie was what introduced me to this talented artist and have since enjoyed listening to his music along with other Country music.
Album artwork is limited to the LP release and after unsuccessful searches for CD covers on the web, I suspect this particular best of collection has never been released on CD format.
.
Track Listing
01 Drinkin' My Baby (Off My Mind)  2:23 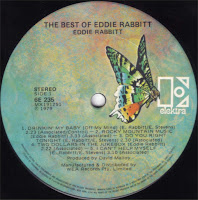 Posted by AussieRock at 9:40 PM