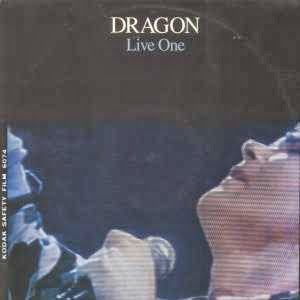 Led by the late, great Marc Hunter, Dragon were a premiere live act in their heyday, and also released a stack of classic singles. As Australian rock historian Ian McFarlane writes, ‘Dragon were one of the most popular and notorious acts on the Australian scene … the band earned a reputation for fierce live shows, arrogant behaviour and a decadent lifestyle.’ Ah, real rock stars. But these larrikins created incredibly well-crafted pop/rock songs which, if anything, sound even better today than back in the late 1970s. Among the highlights of this compilation you will find Magic, Rain, Cry and their hit single April Sun In Cuba.

MARC & TODD HUNTER BACK TO BONDI
(External Combustion by Glenn A. Baker, Horwitz Grahame, 1990. p68-69)
Glenn writes: This piece, which appeared in the 4 November 1989 issue of The Australian Magazine, was the culmination of almost a decade of various chronicling of the band, which has long been in my personal top ten. Parts first appeared as the notes which graced both a 1983 CBS 'Best of album, Are You Old Enough?, and a Dragon songbook. Other sections were borrowed from a European biography I wrote for the band during their short stint as Hunter. 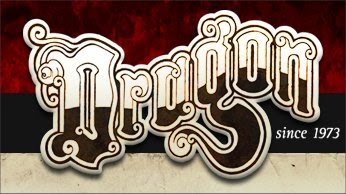 This version came together when BMG Records commissioned me to prepare an interview for the Bond! Road album, which necessitated a lengthy discourse with Todd and Marc in their Kings Cross management office.
Marc and Todd Hunter devote considerable energy to convincing people that they can't bear each other. Largely, the labour is wasted. It only takes a few minutes in their presence to recognise the benign nature of their sibling rivalry and feel the palpable empathy that flows between them. When this complementary pair earnestly tell you how opposite they are, you can only nod politely and stifle your smile.

Certainly there was a time when their blood ran in each others veins as acid, when they pulled so far apart that it seemed unlikely the rift could ever be healed. Like so many rock'n'roll siblings — the brothers Gibb (Bee Gees), Wilson (Beach Boys), Fogerty (Credence Glearwater Revival) and Davies (Kinks) among them — the Hunters did much of their growing up in public and passed through bitter phases of assimilation. But long after their heads had been turned and their hearts hardened by the rock'n'roll sycophants they came back to the security of each other. It just made sense.
"We're so totally different in any problem or any view," insists Todd. "We just come at things from a completely different direction, and end up at the same place." Marc essentially concurs: "We work so well now because we anticipate what the other is going to do...". "Anticipate and loath it in advance," interrupts Todd. Marc persists. "Musically we are totally opposed, and our polarisation results in a creative tension. Todd likes things in a certain way and 1 like them a certain way and whoever's in the middle is almost like a buffer. That's how our ideas get sort of mutated into a distinctive sound, without us even being aware of it at the time." 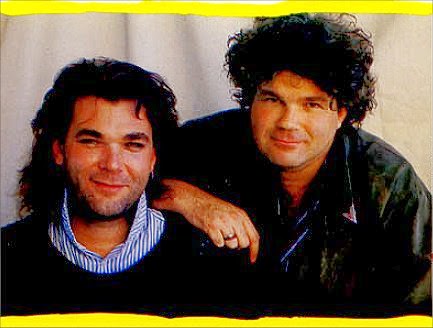 The Hunters have been seriously making music together, with some notable gaps, since 1973. That was the year that Marc joined elder brother Todd's aggressively experimental 'head' band Dragon; the vehicle through which the pair are still reaching an appreciative audience 16 years down the line. Those years have taken Dragon through the full spectrum of the 'rock'n'roll crazies', weaving them in and out of obscurity, fame, disillusionment, overindulgence and acclaimed accomplishment, finally depositing them in the rarely occupied elder statesman category of Australasian rock.

"The good thing about Dragon," contends Todd, "is that we've always been a bit unfashionable. That means you can enjoy periods of great success but not go out of fashion a year later. You just become a sort of hideous fact of life." That statement is concluded, like so many of Todd's, with a short, nervous laugh, sort of an apology for the transparency of the self deprecation.
Dragon may well be familiar, but it's the sort of familiarity achieved by bands like Genesis, the Angels, Pink Floyd, Mondo Rock and the Grateful Dead. The band seems to engender warmth and trust in the hearts and minds of those who have grown up with their passionate, full-bodied, fluid pop. "We've tried to take our audience with us" reveals Marc, "by staying true to the idea of pop music that we had when we first started playing. I guess we have always tried to do the best we could in that particular field and I would imagine that the people who liked us for that reason still have cause to like us. We're obviously getting better at what we do and we're still enjoying it — we couldn't keep doing it for 16 years if we didn't — but we still really don't give a shit about the fads, fashions and trends of rock music. To us, it's still pop music, that's always been the prime attraction. I like the idea of making basically disposable music which, through fluke or artistry, can last for a long time and become a part of people's consciousness. Pop doesn't receive enough honour. It can sometimes be a high art form." 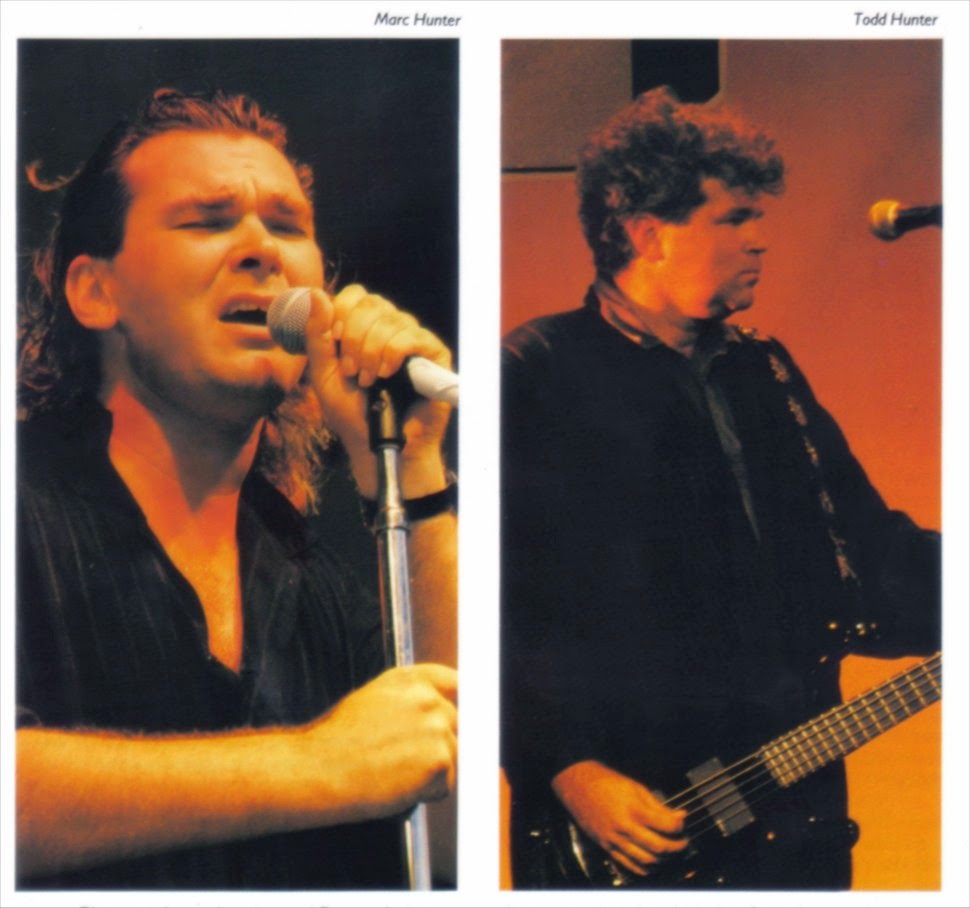 The late 70s era of Australian contemporary music was dominated by Dragon's fire and ice. They arrived after the mega-platinum pop burst of Sherbet, Skyhooks, TMG and Ol'55 and reigned almost supreme until the rise of deliberately working class bands like Cold Chisel.'Australian Crawl and Men At Work, they were a union blessed with charisma, arrogant energy and an incisive yet disdainful rock vision. Their deftly structured music teetered between sweet lyricism and thinly veiled near-satanic sexuality, often projected from a chilling confrontational stance. They employed no gimmicks and made no promises. How one found them on a given night was basically how they felt that day. Thankfully, each performance was imbued with its own rare ingredients of mood and motivation, and there was rarely a truly poor one.

Through the brittle, tensile exhilaration of their early hits — This Time, Get That Jive, April Sun In Cuba and Are You Old Enough? among them — Dragon dominated the Australian charts for three intense years, from 1976 to 1978. In commercial terms they were unstoppable, the medals couldn't be minted fast enough — Band Of the Year, Album Of The Year, Most Popular New Group. They collected a stack of gold and platinum record plaques, toured America twice and, inevitably, collapsed under their own awesome weight. "We were incredible" boasted Marc Hunter during a 1986 interview. "I don't necessarily subscribe to that vision of Dragon as a dark. malevolent, destructive force but there used to be this composite energy that reared its head whenever we were together. I still don't know what it was or what caused it but I do know that it remains in the spirit of our music.
There are those who witnessed Dragon during their first peak who do subscribe to the impression that Marc dismisses. Those who saw him select sweet young things from the front rows at outdoor concerts and mock rape them on stage. And those who saw the loss of two members of the band from drug-related deaths. It is not something that the Hunters hide, nor is it something they choose to dwell upon. When Marc and Todd reunited at the end of 1982, after four basically lost years, they declared: "We're united in a common purpose and there's something seductive about that. We hadn't done what we set out to do — the drugs, drink and dissipation sidetracked us. We were too tired, we'd lost contact with reality."

Brothers Of Rock
INXS's Farriss brothers, Pseudo Echo's Leighs, Split Enz's Finns and Dragon's Hunter Brothers....Australian Music is like one big Family Tree. Chrissie Camp asks five sets of siblings (starting with the Hunters) about that special Brotherly Chemistry.
.
TODD:
"The hardest thing to take about Marc is that he is such an incredible extremist. If he's feeling down, he is so down you can't believe it, but if he's up, he's incredibly positive. That can be wearing, but there's a million good things about him too.
We don't argue much these days. We used to in the '70's when we were much younger and it was more of a crusade type thing. We had huge fights. we came to blows often, but now it's great. We can finally see each others point of view even if we don't agree with it.
Our parents were very musical. Our father Stewart played sax and he'd say 'right,family band time' and the whole family would harmonise. That's a South Pacific sort of thing, island harmonies 'cos our mother is Fijian. We grew up listening to huge Maori choirs too, so Marc's and my harmonies happen completely automatically. We've never worked on it, it's instinctive for us.
I think our relationship has helped the band because there is a bond there that has made things stronger. I mean you couldn't get two more different people anywhere than us. On any issue we approach it from completely opposite degrees and I think the music benefits because of that. We're the only remaining members of Dragon, so I guess we've been the glue that keeps it together. Who's the boss?
Whoever is shouting the loudest!"
. 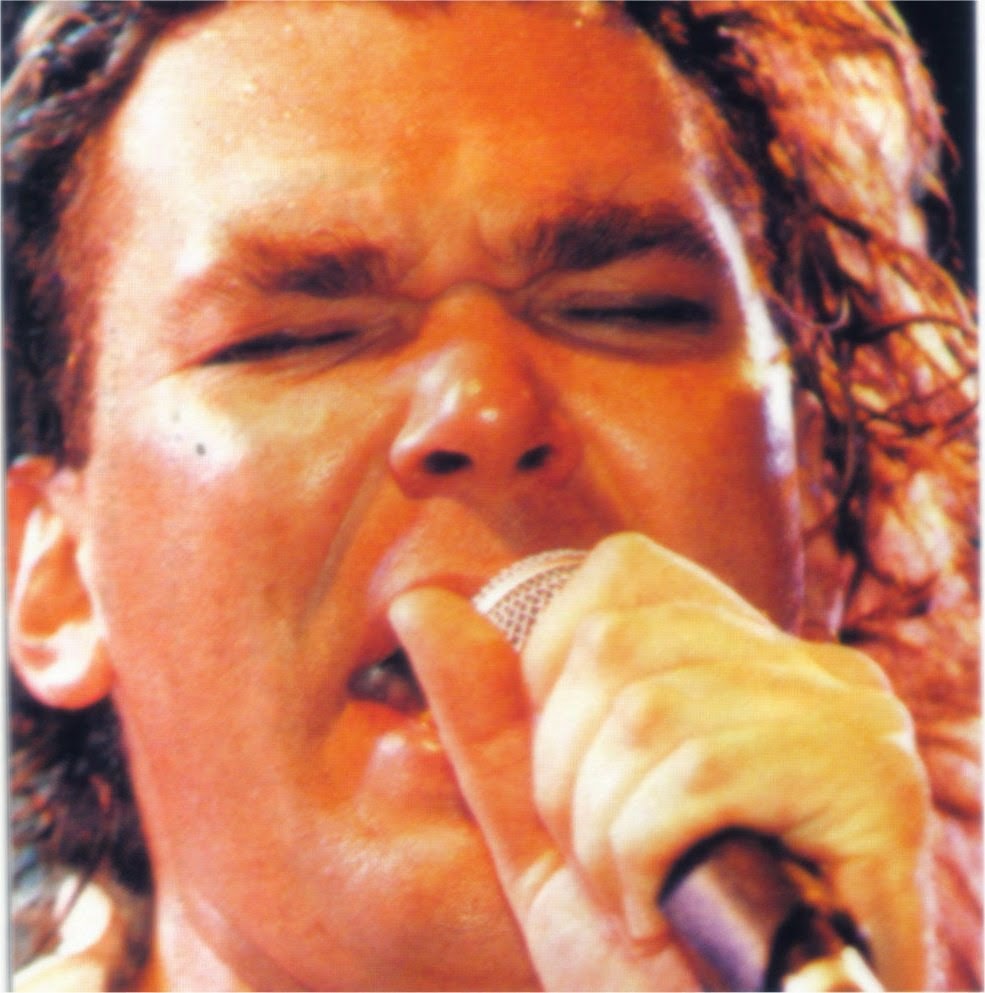 MARC:
"Todd started first. He learn't how to play the piano and the guitar. I was the one who was always, I don't know, sneaking around chasing sheep. There was always music around when we were kids. We both got guitars for Xmas. I broke mine (laughs). I started playing the drums because it was easier to hit things rather than having to learn how they worked (massive laughs).
I definitely wouldn't have gone on to have the same career if Todd hadn't been there pushing me. He has a firm head.
We don't argue. We have minor differences about what is and is not pop music, but that's the dichotomy of the band. Todd and I have opposing points of view, and we always have strong people in the band between us to filter the ideas down.
What's the worse thing bout Todd? If you'd asked me five years ago I could have given you a list (more laughs). Nothing much really. He has the least enviable job as he's the older brother so he has to be fairly constant. He's two years older. He doesn't play the older brother role much though, only when he has to, when I do something stupid" [Extract from Countdown Annual, January, 1986. p72].
.
This post is a rip taken from my cassette tape in MP3 format (320kps) and includes limited artwork. This live recording was made on 10th August, 1984 at the Sydney Entertainment Centre, at the end of Dragon's 'Body & The Beat' tour.  Not a bad concert I might add and as a bonus, I'm including their 1985 hit single "Speak No Evil" which had the live rendition of "Witnesses" from this concert as its B-Side.
For up todate information on Dragon, see their following website.

REPOST: At the request of a mate, I've now posted this album in FLAC format
. 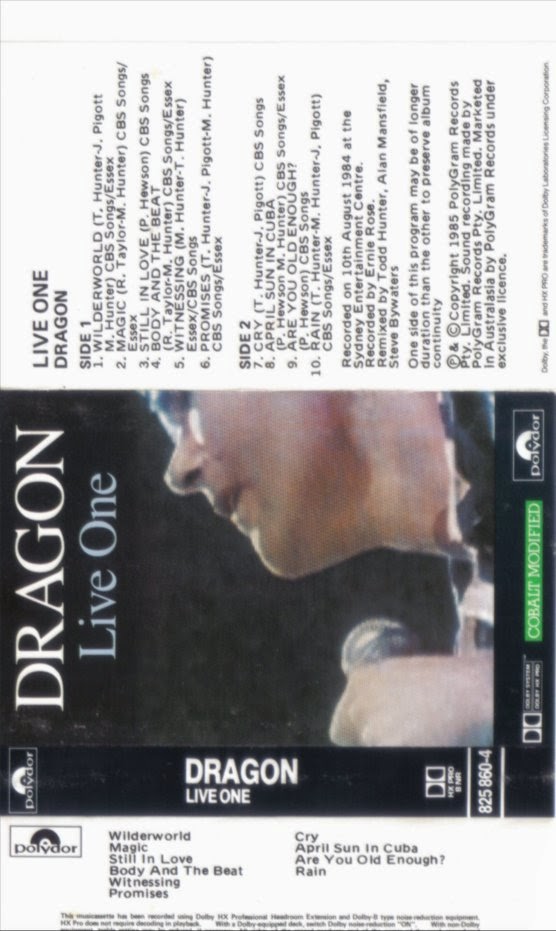