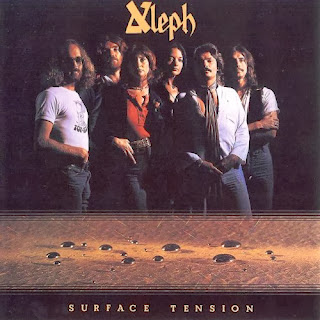 Although based out of Sydney beginning in 1974, and later on the New South Wales North Coast, Aleph’s connection with the Northern Tablelands was through Ron Carpenter, Dave Froggatt and Dave Highet, all of whom were former members of the Armidale band Bogislav.  Aleph was initially a six-piece outfit which performed an all original repertoire. Utilising Mellotrons, moogs, Oberheim synths and elaborate guitar effects, along with traditional rock instruments, the band’s music during the early years has been described as full-blown, complex symphonic rock in the vein of Yes, Genesis and King Crimson. In this respect the band, along with Sebastian Hardie, helped pioneer the art/prog rock  genre in Australia.

At the end of 1974 Aleph recorded six songs at Sydney’s Albert’s Studios. Another band recording its debut album there at that time was  AC/DC. Interestingly a connection existed between the two bands through Ron Carpenter. The drummer had only recently left AC/DC after having spent much of 1973 and 1974 playing in several of its early line-ups (AC/DC and Aleph later even played a gig together at the Sydney Haymarket ca. 1976/76). By late 1974 Aleph had also begun playing gigs around Sydney, and over the next few years steadily built a following through its consistently high level of musicianship. The band also secured a contract with Warner Brothers around this time.
Although Aleph’s reputation as one of the country’s leading art rock bands was building, these early years were quite difficult, with a number of factors conspiring against the possibility of national success. The most serious was the band’s 1976/77 national tour which unfortunately resulted in a significant financial loss. The recording quality of the debut album, 'Surface Tension', was also deemed unacceptable by the band and they subsequently asked Warner Brothers to allow them to re-record the songs. Warner denied the request, however, and went on to release  the LP in 1977. This eventually led to the band and record company terminating their association. Aleph then lost lead singer Joe Walmsley to illness in 1978, and that same year had its custom PA repossessed as a result of being $400,000 in debt. The band was also forced to abandon its touring for several months after Ron Carpenter was asked to fill in as temporary drummer for Cold Chisel. Carpenter also spent much of 1979 pouring his energies into the band 'First Light', which recorded and released a self-financed album that same year. 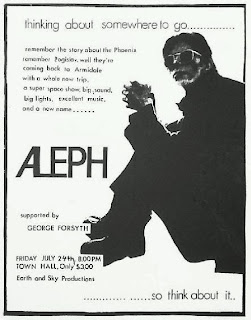 In 1979, Carpenter convinced the remaining members of Aleph (and their families) to relocate to Byron Bay where the band subsequently based itself. Over then few years, however, the line-up whittled down from a five piece to quartet and finally a trio, with Carpenter eventually taking on lead vocal duties. Although conceived as an all originals band, Aleph had by this stage been forced to play a selection of covers – with these ranging from punk and new wave to electronica and classic rock. The creative decisions in this area worked well and the band managed to secure almost nightly gigs throughout Northern NSW and the Queensland Gold Coast through until 1983. Carpenter has since recalled that the band also eventually managed to pay off most of its previous debt.

Along with Idol Minds (Lismore), Aleph is considered to have been one of the most popular and hardest working bands to come out of the NSW North Coast during the pub rock era. [extract from http://havegravity.com]

The Album
Sydney-based symphonic rock band Aleph's one album, "Surface Tension", featured full-blown, complex progressive rock in the Yes/Genesis/King Crimson vein.
Joe Walmsley's high-pitched vocals recalls Yes singer Jon Anderson, while Dave Froggett's guitar style is very much in the manner of King Crimson's Robert Fripp. The only other local bands playing in a similar style at the time were Sebastian Hardie and Windchase. 'Surface Tension' failed to chart unfortunately. Prior to the album's release, Aleph issued a cover of The Yardbirds' "Little Games"/"Of The Essence" as a single. Walmsley left before the album appeared at the end of 1977.  Unable to find a suitable replacement, the band fell apart in early 1978. Later in the year, Ron Carpenter formed 'First Light', which issued a self-titled, self-financed album in 1979.
. 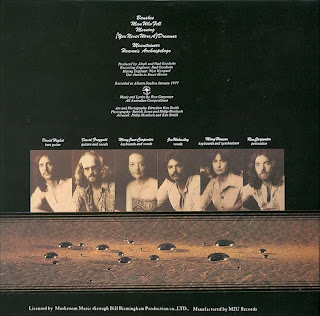 In "Banshee", the first thing I noticed were the familar vocals by Joe Walmsley, sounding like an acute version of Sting. The music is nice, and even when they claim influences from King Crimson, I see more influences from Alan Parsons Project and Styx to be honest.
"Man Who Fell" sounds alittle like Asia with some Neo Progressive fugues included.
"Morning" is a strange song with Neo Classical Metal connections at the start that suddenly turns into AOR. "Mountaineer" has a very classical oriented intro that reminds me more of the album 'Joy' by the Ventures rather than to a true progressive release, then the keyboards turn into some sort of Wakeman fest, but sadly the structure remains very light and doesn't really progress into something bigger.
Finally, "Heavens Archipielage" provides a nice piano at the intro but then turns into an AOR track with strong Asia hints. Overall, this is a great album that shouldn't be missed.
.
This post consists of MP3 (320kps) ripped from a vinyl (not mine) and there is not a pop or crackle to be heard - quite amazing. Full album artwork is included including a wonderful gatefold poster of the band.
Copies of this album go for $200+ on ebay, so grab your digital copy now.  It is also my intention to post a couple of live tracks recorded by Aleph's earlier inception 'Bogislav' when they played at the 1972 Hoadley’s National Battle of the Sounds, in my next WOCK on vinyl post - so stay tuned.
.
Track Listing
01. Banshee - 5:43
02. Man Who Fell - 5:44
03. Morning - 4:14
04. (You Never Were A) Dreamer - 4:17 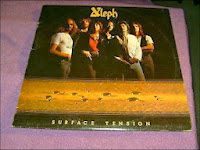