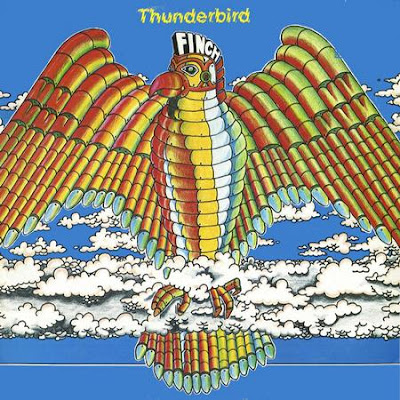 Finch was an Australian hard rock band, initially formed in Sydney as Stillwater in 1973, they soon became Finch. In 1973, they won a 2SM/Pepsi Pop Poll, winning a contract with Picture Records who released their first single in 1974 "And She Sings".
They released 2 more singles on their on label Eagle Records and contributed 5 tracks to the cult Surfing Soundtrack 'Drouyn' in late 74.
This followed with the release of their debut album 'Thunderbird', acclaimed by many people to be a classic Aussie release from the 70's.
After the release of their single "Short Changed Again", Finch moved south to Melbourne and embarked on a tour with Supernaut. Line-up reshuffles followed, including guitarist Bob Spencer exiting for Skyhooks (and eventually 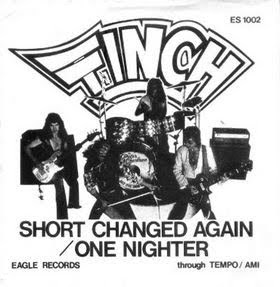 the Angels), and Mark Evans, freshly ejected from AC/DC, joining the fold.
The new-look Finch released the major label 'Nothing To Hide' LP in 1978, along with a number of singles. There are a handful of passable songs on the LP - "Nothing To Hide", "Leave The Killing To You" - both issued as 45s, but on the whole it was characterised by a lack of inspiration and tepid production.
In 1978, after signing a deal in the US with CBS Records subsidiary label, Portrait Records, Finch was changed to Contraband (due to the existence of the Dutch band also named Finch). Earlier Finch material was re-released under the Contraband name but they finally broke up in 1979.
.
Article from RAM Magazine, December 5, 1975
. 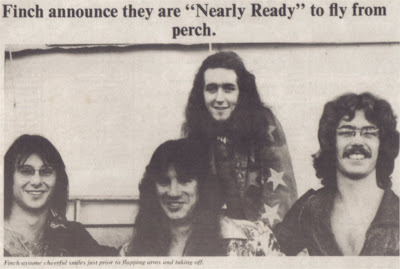 "Hey Syunky! What's your name?" Collectively it s Finch; individually it's four heavy metal tweetie-pies: Peter McFarlane, drummer, Bob Spencer, lead guitar, Tony Strain, bass, and Owen Orford, singer. Their music is hard, loud and heavy with an overlay of good humour that shows up in their own songs, like the aforementioned Hey Spunky.They've been together for three years or so; if you haven't heard of them outside NSW it's due to a less than wonderful relationship with their last recording company. Picture Records. Finch released one single on that label. The A side was meant to be a heavied up version of The Eagles song Out of Control, with Finch s own And She Sings as the B."They did a switch and released And She Sings as the A side, which it wasn't meant to be and that was a mistake," says Owen, settling back against RAM's verandah rail (it was a hectic day inside the office and we'd taken refuge outside). "And then they said 'Look, we've got this really good deal here, this surf movie that's gonna be the biggest thing since Crystal Voyager.' And we thought that would be a good thing to get on to the soundtrack. But we had problems fitting into it; a lot of our music was too heavy and we weren't prepared to go into mellotrons and stuff because we'd tried it before and it doesn't work for us." The movie was Droun and Friends, for all you surf buffs. "What happened was we got very little time to do it in, the production was lousy, the mix was shocking; it wasn't what we wanted out of it at all."Anyway, after Droun we thought that's it, we re not going to do another thing. We just let our contract expire, which took twelve months, and that brings us up to now.In the last few months, since Finch s support gig with Skyhooks on the New South Wales coast stage of the 'Hooks tour, another record company has extended its tentacles toward them. "This record company was pretending they were 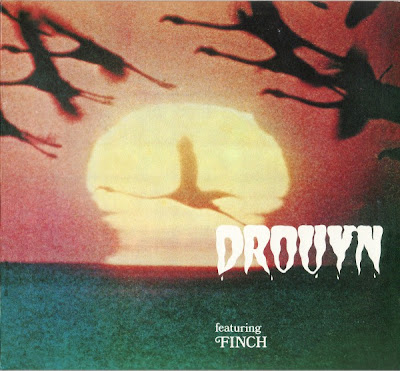 interested in us when what they were gonna do was monopolise all the Australian bands; they've signed up everybody. We thought bugger it, we're not gonna get slopped in there with everybody else and not be able to do what we want."Bob Spencer, who has fine blond hair and equally fine chiseled bones in a face accentuated by rimless glasses, has just turned eighteen; '75 is his final year of school, but his attitudes are hard edged and uncompromising.Finch assume cheerful smiles just prior to flapping arms and taking off."See we're real little bastards, we want lots of promotion from people who'll take a lot of interest in us."All of which might sound arrogant, but, because they also throw in much guffawing and general pleasantry, Finch come off as being remarkably free of arrogance. Enterprising, too. "Our manager Brian Todd is starting his own record company. We're going to do our first album and release a single off that. Doing everything ourselves. Up till now we've always blamed everything on everybody else, so now we're all on our own.""A nice big fat ballsy sound, that's how we want it." That's the sound they produce onstage alright, and it's much appreciated by their following, which is considerable. As singer Owen Orford says: "Everybody likes music they can dance to, no matter how cool they try to be. Older crowds might say they don't like songs like Hey Spunky but once they get a bit pissed they're gone. You can play stuff all night and if they can't dance to it they can say 'Oh, really great musical band' when they've had a bloody boring time. Anything we do that's a little bit self indulgent we make sure has got a reasonable dance beat behind it. Well, almost reasonable anyway.The album, tentative title anything from 'Finch in Flight' to 'Birdsturd', should be in the shops first week in December. It will be original stuff.Lately Finch has been going like a bomb, more work than they can handle, upstaging more established bands who have several albums to their credit, whooping audiences .... They estimate they'd sell at least four thousand albums if they released one now without any hype at all. A country tour of Victoria and NSW is being pressed for but the band.won't do it until they've got an album to promote. Over the background sound effects of a three car collision down the street and more laughter, they say; "Sounds a bit too good to be true doesn't it? All we've got to do is pull it off... we all believe we're the best thing since sliced bread, all we've got to do is let everybody else know too." It started to rain at this point but it didn't matter to Finch — they chattered on cheerfully. Solid, uncompromising, energetic and cheerful they are, and more power to 'em. [ed Annie Burton]
.
Followup Article from RAM Magazine, May 5, 1976
'There's No Guano Like Finch Guano'
. 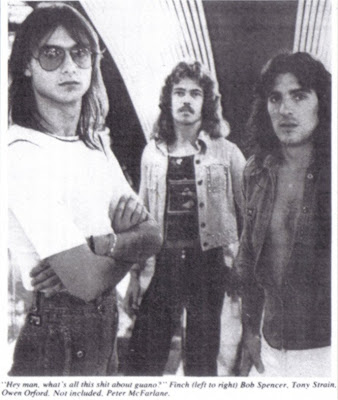 But there's no nastiness in this story. A thoroughly likeable group charms the usually irascible Annie Burton. Toughen up lads.
Well, cocky popular Sydney based dance hand Finch have spread their wings just as they said they would. Their first album, Thunderbird, will be out and about with this issue of gutter rock press; it also conveniently coincides with the start of the Victorian leg of the epic Hush tour, for which Finch is the support band. Neat, eh?
Owing to Hush's recent American coup, there s been some confusion over how much of the tour Finch will do, but at this time they will definitely be there for the N.S.W. and Victorian sections.
And they'll have an album to back them up. What s even better is that it's good. This ain't the place for a review, but a' little preview won't hurt — it's solid, got depth and shades, is well-produced, has a measure of sophistication without losing their essential raunchy feel, and it has the group's best songs on it. One side is lighter. Pink Spiders, Hey Spunky, Poser, Crystal Country Gorge and Stay. which is being released as a single. Side two is er, more in the mind fodder line, with Sail Away, Valley of Tears. One Nighter and Mushroom.
The latter is far and away the best track musically, with Bob Spencer's guitar synthesizer giving a violin effect taking off from Owen Orford's voice, which is powerful throughout, and Bob coming back to lay down some sizzling guitar trails over the top. Much care was taken with this track, up to ten hours worth.
Owen: "We're confident, we're really proud of it for a first album; we know it s the very best we could do at the time.
They give off a smell of confidence, a son of corporate solidness. Cos they've done it all themselves, the whole shebang. "We've got our own publishing company, we write the songs, so we get all the royalties from them and the publishing rights.- Our manager Brian Todd has set up our own record company (Eagle Records). The album's being distributed through Tempo Records. Bob: "That's the only part we can't do ourselves, print it and distribute it." Owen: "And if they don't gel it out to the stores, we'll just run around lo the stores and hand out records personally." They would loo; half an hour with Finch is positively exhausting, all that energy ...
The band also has just made a thousand buck's worth of film clip for the single "Stay". 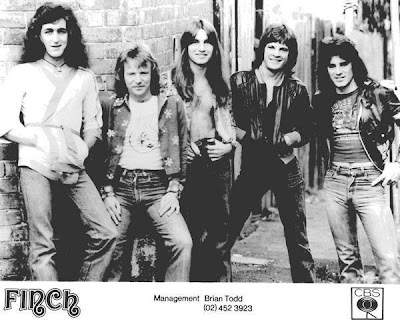 The best is what they seek, and it seems to work for them. They didn't have the album out for Christmas because they wanted to use Trafalgar Studios, which were booked up — so they waited until they could gel the studio lime and the engineers they wanted. They found it all marvelous, the perpetual studio night, the fifteen hour stretches, the wonders of the equipment ... It's a reflection of their vitality, the enjoyment they get out of it all. not just the playing part of it which is the only pleasure for most bands while the rest is a confused hassle of mutual bullying. Constant improvement; they get out and do it.
"We're gelling it all in perspective, making sure everything's to our advantage, so that it all ties in with our professionalism. We're getting there slowly but surely, but the good thing is it's all done by us. Keen as a bean. They laugh a lot and there's no calculating or snideness going on in their eyes [Ed Annie Burton]
.
This, their debut album, is the finest of the bunch. Excellent vocals and charging guitars punctuate this album, which is filled to the rim with hard rock goodness. There is a very slight progressive temperament to some of the material, but by and large, this is a hard rock album.
Sadly, Finch's output has never been remastered and pressed to disc. In the meantime, here is a clean vinyl rip - 320kps (thanks to Midoztouch) and see for yourself why collectors drool over Finch.
Full album artwork is included along with a multitude of bonus tracks comprising of earlier singles, the 5 tracks from the Drouyn Soundtrack and a live version of their single "Short Changed Again". I have also included scans of the two featured articles on Finch from RAM Newspaper. Thanks also to Wally Beat for the Eagle Label scan below and I highly recommend you pop over to his blog for a more thorough account of Finch's earlier single releases.
.
Track Listing01. Stay - 3:1202. Pink Spiders - 3:20 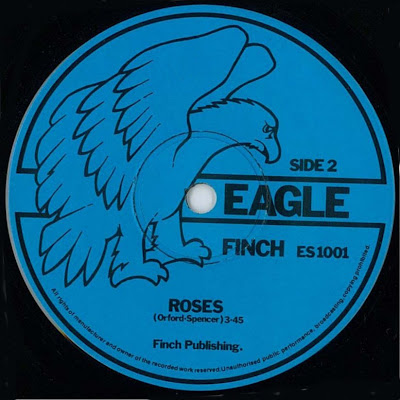