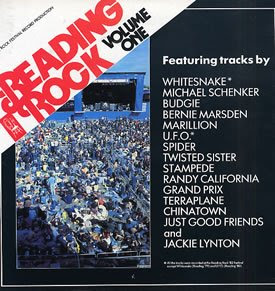 The 1982 Reading Festival arena is depicted in the photo below. Bands played alternately on the two main stages. While one had a band playing, gear was being set up on the other stage. There was always a rush from one side to the other between bands. There were no small stages. Note also lack of burger vans and stalls selling hippy sh*t.
The twenty second festival possibly had a more attractive lineup than 1981, at least if one was a heavy rock devotee. The inclusion of hard rock guitar stalwarts Gary Moore, Randy California, southern rockers Blackfoot and erstwhile pub rockers Dave Edmunds and Wilko Johnson gave the lineup spine that was missing from the previous year.
The headliners were also a tad more prestigious. The Scorpions/UFO former lead guitarist Michael Schenker, whose repertoire veered into the sort of metal jazz/rock territory inhabited by Jeff Beck- as well as delivering more predictable hard rock fare - gave Sunday night a touch of class .
Budgie and Iron Maiden were guaranteed to 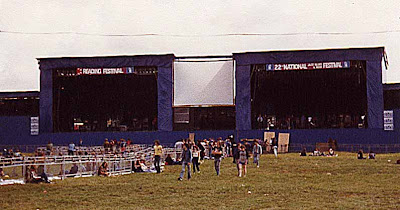 deliver an exciting hard rock show, regardless of whether one thought of them as innovators within the genre or not. Maiden's credentials were reinforced by the presence of Bruce Dickinson , the erstwhile Samson lead vocalist, who had taken over the vocal spot from Paul Di'Anno .
All three of these artists were recorded by the venerable BBC and broadcast on the Radio One Friday night rock show in 1983 .
Once again, Reading delivered a mid range experience for the punters, no top end acts like Pink Floyd or the Stones which needed a mega crowd to return the organisers a profit, but a solid workmanlike bill that would leave the attendees satisfied in the main .
There were some changes made to the final band listing with Trust pulling out at the last minute and Diamond Head replacing Manowar on the Friday night. Just Good Friends was added on Saturday and Wilko Johnson & Lew Lewis added on Sunday.
This was what Reading was about at the time, but the formula was about to change, as the following year's Festival (1983) would be the last Reading for several years.
.

.
The following are recollections from various people who attended the festival (taken from ukrockfestivals.com)
. 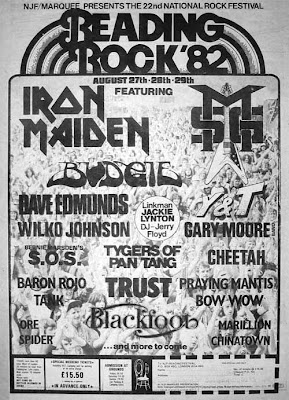 Nicola remembers - Abiding memories – vodka and ginger beer, meat paste sandwiches for 3 days, everyone was friendly, some great bands. Yes Schenker was technically brilliant but god was he boring to watch. Give him his due he did play a good Dr Dr. Some of the ‘little’ bands had more enthusiasm. Loved Grand Prix and Tygers - less polished but much more raw enthusiasm. Seem to recall Rock Goddess getting a lot of drooling males watching. Had completely forgotten Diamond Head were there. Was it me or was there more space than at Donnington, seem to remember being able to lie back and listen without getting trampled on. . Oh and the ‘official’ T-shirts were £5, a fortune back then. Picked one up for £2 on the last night, it finally disintegrated in 1992 Anyone remember the press reports of non-stop riots between bikers and police? I got back home to find the parents worried sick. I didn’t see any riots but I did see three Angels wading into the river to rescue a swan that was tangled in a fishing line and then looking after it until a very nervous RSPCA man arrived. . 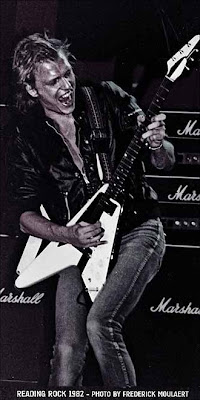 Barry recalls - Band of the weekend were Blackfoot, the perfect festival band, good time (southern) rock'n'roll that lifted the spirits of everyone gathered. Tight band and what a master of ceremonies, singer and guitarist in Ricky Medlocke. When they came back to the UK, some years later, they were a different band, sold out to hair-rock, which, in a way, makes the Reading performance such a great memory. To this day I can still recall turning around to see numerous confederate flags being waved by the crowd.
As for the rest? Maiden, without doubt the most popular band of the weekend, solid entertainers and riding high on the success of 'The number of the Beast', on the way up and up and now living legends. The Tygers of Pan Tang put in a good performance but had the unenviable task of being sandwiched between Blackfoot and Maiden, if I remember rightly. Gary Moore, I remember for looking utterly disgusted by the bottle/can throwing antics of some of the crowd. Quite rightly so as these idiots injured quite a few people in the process.
.
Pheonix says - All I can fill in is Chinatown's names: Steve, Steve, Danny, Pat and John (Vocals, Drums, Guitar, Guitar and Bass respectively) and odd bits from there. I think they played both songs from their single which had come out about a year earlier, the A side of which was 'Short and Sweet', and the B side... Nope, it's gone. They also may well have done their version of 'Doctor Doctor', which with all due respect to the other groups present then was truly kick arse, and honestly the best version of the song I've ever heard.
. 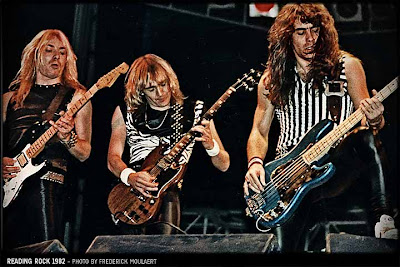 Pat recalls - Can`t remember Tygers of Pan Tang at all (must have done a tour of the stalls while they were on), but I do remember being won over by Blackfoot, who were fronted by the charismatic Ricky "Rattlesnake" Medlocke. They included a great version of Free`s "Wishing Well" in their set, yes the same cover that Gary Moore had done an hour or so before..
And finally Dave remembers - The afternoon bands were a bit hazy then and worse 27 years years later but I remember Grand Prix being pretty good, Spider being a dreary Quo like boogie band and Dave Edmunds being an up market pub rock band. Cheetah - masses of whistles and chants of "get your t*ts out for the lads" Twisted Sister - sweary, pantomime dames - funniest looking of all was the lead guitarist - Mendoza? Maiden - OK and the crowd favourite but they seemed a bit plodding to me. Y&T - best of the weekend - we'd got Earthshaker on import a year or so earlier so were looking forward to their appearance. They had played a great gig at the Marquee the week before and had great reviews. They did not disappoint.
. 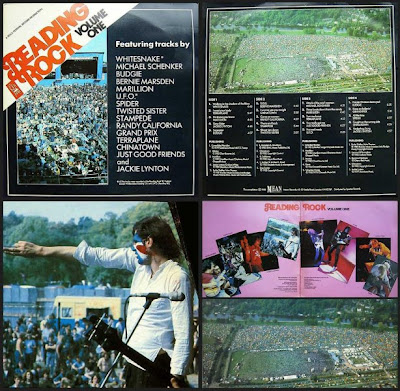 .
It is interesting to note that I purchased this double LP from my favourite Import Record shop in Carlton (Melbourne) back in the 80's called Reading Records (how coincidental is the name hey) but it was in fact an offshoot from 'Reading Books' which still exists in Carlton today. Anyhow, the main reason why I purchased this album was because of the two live Budgie tracks.
At that time, there were no live recordings of Budgie available in Australia, so it was certainly an attractive item for me. Because it was an imported album I'm sure I paid threw the nose for this double LP but now cherish this album for its collectability.
It is strange that Mean Records chose to include a couple of tracks that weren't actually from the 82 Festival - Whitesnake's recording was from the 79 Festival and UFO's from 1980. Yet, they neglected to include tracks from bands that did perform like - Iron Maiden, Gary Moore and Tygers of Pan Tang. Below is the (almost) correct running order of the 1982 Reading Festival, taken from the official festival program. Perhaps they had intended to release a Volume Two (based on the name for this release - Volume One) but as far as I can gather this did not happen. 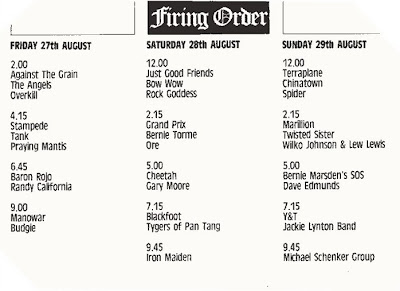 .
This post includes a rip of my near-mint double LP (320kps) along with full LP album artwork. Because the total running length of both LP's exceeds the limit of a single CD, I have decided to include some bonus tracks from bands that were not included by Mean Records. I have sourced these bonus tracks from individual 'Reading 82' bootlegs released for Iron Maiden, Gary Moore, Y&T, Tygers of Pan Tang and Praying Mantis and selected what I consider to be the two best tracks for each band, based on their sound and performance.
I would like to acknowledge the use of concert photos taken by Frederick Moulaert and extracts of festival details from ukrockfestivals.com
.
Track Listing
Record one 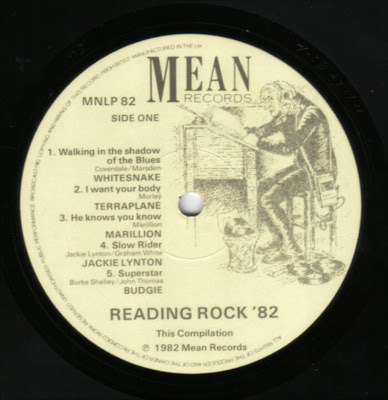 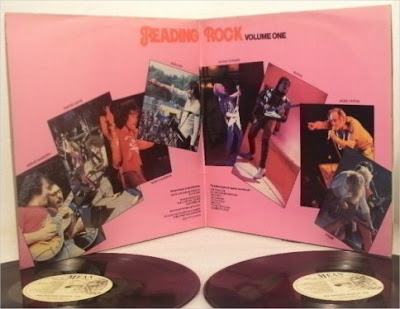