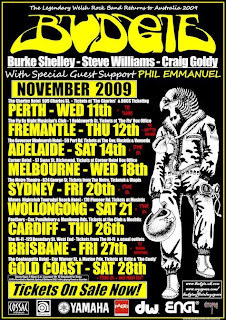 Well, I finally got to see Budgie after waiting 36 years for them to tour Australia. They played at the Corner Hotel in Richmond, Melbourne on the 18th November in front of a small audience of approx 300. Although the venue was not large they still performed with energy and intensity that one would normally expect to see at a larger venue. Their Australian tour covered all major cities and were supported by the very talented Aussie guitarist Phil Emmanuel, brother of Tommy Emanuel (see my review of Phil's performance on the Midoztouch forum)
Budgie regrouped in the late 90's and the new millennium with various new guitarists (but admittedly not as good as the famous Tony Bourge), with Ronnie James Dio's guitarist 'Craig Goldy' currently sitting in the axeman's seat. But let me tell you, this guy played 'note for note' every lead break that Tony Bourge ever produced when they played standards like 'Parents', 'In For The Kill' and 'Breadfan'. Goldy's dexterity and speed on the frett was nothing short of 'sheer brilliance' and he was somehow able to play rhythm and lead at the same time (similar to the great Jimi Hendrix). 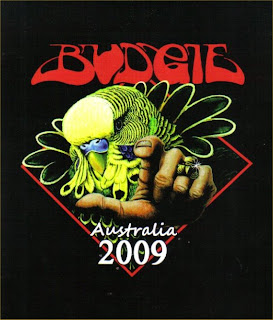 Throughout the gig, Goldy's personna was very warm, often smiling at individuals in the audience and he was obviously enjoying himself. However, the main focus for me was to see the original vocalist and bass player 'Burke Shelley. 'This guy must be getting close to 60 but when he came on stage, he looked like a 30 year old, dressed in Levi jeans with the knees torn out and flaunting long waivy hair which was straight out of the 70's. His uniquely high voice (similar to that of Pavlov Dog's David Surkamp or Rush's Geddy Lee) has not changed one bit and Shelley was able to reproduce every high, screeching line without fault. However, because I was only metres away from Shelley, closer inspection when the lights focused on his face and torso revealed a body similar to that of Keith Richards! I suspect he too has suffered the usual perils of working in a rock band. 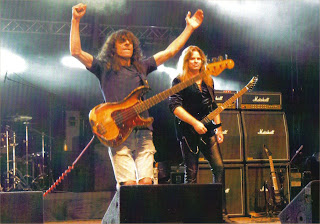 They started off with their usual opener 'Panther Division Destroyed' and then went straight into 'Melt The Ice Away' to speed things up. Steve Williams, their 3rd and final drummer, was keeping the rhythm section in tow looking very cool and comfortable behind his modest drum kit and dark Ray-Bans and has a style not unlike that of Ian Paice from Deep Purple. Shelley is a brilliant entertainer and played his worn out Fender bass like a real showman, adding solid riff lines where required, often closing his eyes when singing but still able to play complex bass lines. The highlights of the night would have to be renditions of 'Parents' and 'Napoleon Bona Parts 1 & 2' both exceeding the 10 minute mark. I gotta say it was an almost surreal experience and I was in total ecstasy. 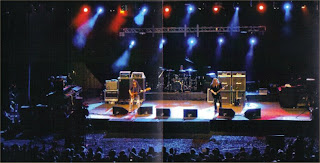 They covered a wide range of tracks from most of their 12 albums, including the heavier tracks from their recent release 'You're All Living in Cuckooland'. After finishing the set at about 11pm with 'Whiskey River' they came back for an encore playing 'Guts' and then their trademark track 'Breadfan'. Each member of the band was showcased during the encore and both Shelley and Goldy made an effort to interact with audience members 'pearched' at the front of the stage. When I finally walked out the doors after the gig, and attempted to chat with a few other happy campers, we all realised that we were stone deaf and just laughed. It will be a night I'll never forget and can now mark off another item on my list of things to do before the 'final curtain'. Final word - Impeckable ! 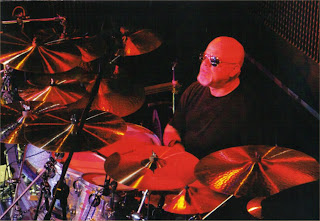 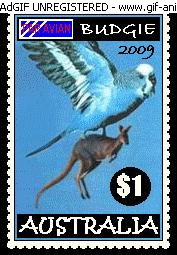 If you want to explore Budgie more, you'll find a few other Budgie postings on this blog.
Unfortunately, I was unable to get an acceptable recording of the Melbourne gig, so the next best thing I can offer here, is a great audience recording of a concert made earlier on in the year, when Budgie toured Poland. The setlist is similar to the Melbourne concert, although it is missing some core tracks off their current album.
The quality is very good for an audience recording, ripped at 256kps, with minimal crowd chatter and was recorded in Olsztyn on 24th March, 2009. Limited artwork is included.